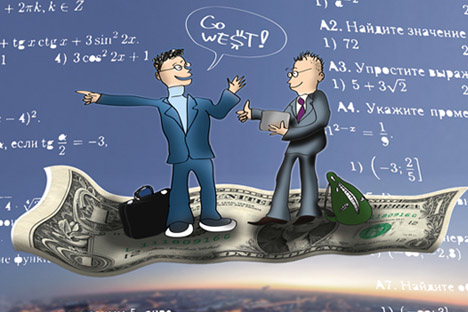 In the past few years there has been considerable concern about capital and talent leaving Russia. The situation is not as severe as it is often portrayed, but improvements are clearly needed to help the country progress.

The financial account deficit, or capital outflow, may be the result of a strong current account surplus (which is why Germany, Japan and China have capital outflows) or it might be caused by domestic savings exceeding domestic investments. The former cannot be avoided, especially in the short-term situation where spikes in export levels come from positive fluctuations in oil prices. But to improve the latter, the institutional environment must be improved to make it easier for companies to invest in Russia and individuals to establish private businesses.

It is encouraging that President Vladimir Putin and the Russian government have a clear vision of what should be done. This was articulated in the decree on May 7, when Putin outlined his goals of improving the domestic investment climate with the target of bringing Russia into the top 20 countries in the World Bank’s Doing Business index and creating 25 million high productivity jobs by 2020.

Last year at VTB Capital’s Russia Calling! Investment Forum in Moscow, Putin also emphasised the necessity to diversify the economy, to create modern industry and high-quality jobs, and called for Russia to adopt advanced technologies. Additionally, explicit targets were set for the investment/GDP ratio, with a planned increase from 21pc to 27pc by 2018.

It will become apparent in the next few years whether the medicine prescribed by decree is effective in stemming the capital outflow. But the problem of talent leaving Russia also needs to be addressed.

Russia is experiencing, and will likely face for years to come, challenging demographic conditions that have led to a declining workforce. As growth can only be achieved through increasing productivity, Russia must not only keep its best talent but attract new talent from abroad, whether from former Soviet republics or Central and Eastern European countries hit by the eurozone crisis.

As well as improving the institutional environment for foreign investors, infrastructure should be upgraded, and quality of living, including health care and educational standards, needs to be brought closer to European levels. Only if this action is taken will we see more talented people choosing to come to, and stay in, Russia.

Russia’s acceptance into the WTO is a positive step. It will ensure external trade rules will remain stable and open the gates for foreign investors who want to establish businesses in Russia aimed at external markets. Improving the business climate and embracing the WTO will help steer the country towards the higher investment/GDP ratio on the domestic and foreign sides. This is crucial for growth in a time of stagnating oil and gas exports and a declining workforce. Foreign investment will also boost productivity.

Russia has begun a long journey towards a new model of growth based on productivity and rising investment. It will be hard work to get the country on this trajectory, but there is no other way for Russia to compete in the modern world.

Maxim Oreshkin is a senior economist at VTB Capital, London.