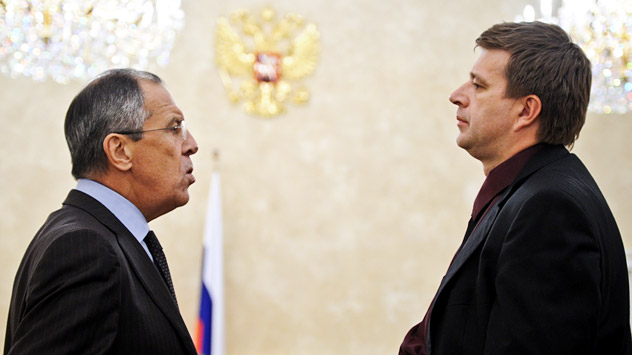 The Russian delegation to Russia-EU Partnership session that deals with visa issues will be headed by Justice Minister Alexander Konovalov (right). Source: ITAR-TASS

Russia and the EU seek a compromise solution to the final outstanding issue.

Moscow and Brussels are getting closer to making a breakthrough in the talks over abolishing visas for holders of service passports, which is the final obstacle on the way to an agreement on relaxing the visa regime between Russia and the EU. Visa rules will top the agenda for the meeting of representatives of the Interior Ministries and Justice Ministries of Russia and the EU scheduled to be held in Cyprus this October.

Russia, EU to exchange missions of experts on visa issue

Cyprus’ capital Nicosia will play host, on 3 October, to a session of the Standing Council of the Russia-EU Partnership. It will address freedom, security and justice issues at the level of representatives of Justice Ministries and Interior Ministries. The Russian delegation to the session will be headed by Justice Minister Alexander Konovalov. Easing of visa formalities will be one of the key points discussed at the session.

The dialogue on establishing a visa-free regime between Russia and the EU focuses on two areas: “Joint steps” towards complete abolition of visas are being implemented alongside measures to ease the existing visa framework. The former area will hardly see any sensations soon. The talks in Cyprus will only draw preliminary results of the “Joint steps.” The sides have just exchanged reports on progress in the four key areas and are now preparing to exchange inspections to check the work of border checkpoints.

There could, however, be a breakthrough in the second focus area, as Russia and the EU hope to remove the final barrier on the way to an arrangement to amend the 2006 treaty on simplified visa issue to citizens of Russia and the EU. The new version of the deal envisions complete abolition of visas for some categories of citizen (members of commercial aviation and civil fleet crews), extension of the list of citizens eligible for multiple-entry visas issued for five years, as well as easier visa formalities for all other citizens reapplying for visas. The only impediment to the agreement is the problem of service passports: Moscow insists that visas be banned for service passport holders, while Brussels objects.

Service passports are issued by the Russian Foreign Ministry to staff members of diplomatic missions and consulates, representative offices at international organisations, servicemen sent abroad, staffs of state corporations and the Central Bank, staff members of administration and technical divisions of the presidential executive office, central government office, State Duma and some other employees of state agencies and their family members. Russia has about 15,000 service passport holders, while the EU has about 20,000.

According to a source in the EU delegation, Brussels would like to leave abolition of visas for holders of service passports outside the framework of the current agreement “because of doubts that service passports are available in Russia only to those who are entitled to them.” A source on the Russian team of negotiators strongly disagrees: “How can they say that passports are issued at random, if they are issued by a single office of a single department of a single ministry?” The Russian official says that Moscow has sent explanations of its procedures for issuing service passports to Russian citizens. Yet the European negotiator insists: “There are doubts that this procedure is strictly followed.”

There are deeper contradictions standing behind the technical controversy. The source in the EU delegation says that Brussels would like more freedom of travel given to the groups that “are more active in bringing Russia closer to the EU and challenging long-standing stereotypes”, i.e., students, researchers, NGO members, journalists and businessmen. “Officials do not make our priority group.” he says.

Moscow has different priorities, though. “This is not a deal facilitating youth exchanges – it applies to all categories of citizen”, the source in the Russian delegation objects. According to him, Russia treats the agreement on easing the visa regime as a “landmark on the way to complete abolition of visas.” “In 2006, visas were abolished for holders of diplomatic passports, the ‘safest’ group as far as the EU migration issues are concerned”, he explains. “Фbolition of visas for holders of service passports could be another such step. Students and pensioners might follow, and so on. But if they are unwilling to discuss even service passports, how should we treat their promises eventually to abolish visas for everyone?”

Russia hopes to enlist the support of Cyprus during its presidency of the Council of the European Union, especially now that Nicosia has good reason to back Russian officials: Cypriot media reported this week that Moscow is to lend Cyprus 5 billion euros. If the October talks are successful, the deal to ease the visa formalities might be signed as early as this December, during the Russia-EU summit in Brussels.