U.S. elections: are relations with Russia at stake? 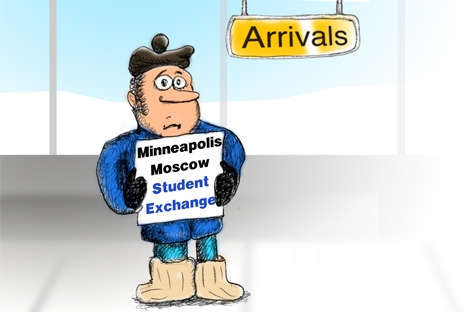 This is the year of elections in many parts of the world, not least in Russia and the United States. Will these two contests end up having a negative impact on U.S. relations with our former Cold War adversary?

For the general public, including here in the Midwest, the answer increasingly appears to be “yes.” U.S. media proclaim that “Vladimir Putin is back,” as if he had not been guiding Russia even during the Medvedev presidency, and that negative shifts in Russian policy can therefore be expected. Meanwhile, the Republican candidate in the November election has singled out Moscow as America’s top geopolitical adversary.

Putin, and Russians, need a break

Beneath the media and campaign hype, Russia remains as enigmatic as ever for most Americans. The Russian economic presence here in Minnesota, for example, remains modest twenty years after the demise of the U.S.S.R. Like many states, Minnesota is making a big push on exports, but the focus is on countries other than Russia.

Minnesota is home to nearly 40,000 Russian-speaking immigrants. Many of them emigrated from Russia in the wake of the 1974 Jackson-Vanik amendment – which continues to restrict trade with Russia even though the emigration it aimed for has come to pass. These well-educated citizens, Russia’s loss, have contributed significantly in fields such as engineering and medical technology. Meanwhile, the Museum of Russian Art, founded in Minneapolis in 2002, organizes well-attended exhibits devoted primarily to art of the 19th and 20th centuries.

But beyond this, exposure to the Russia of today is minimal. Few Russians come to Minnesota to study, especially compared with numbers from China. By the mid-1990s, the University of Minnesota had terminated its summer language program in St. Petersburg. In January this year, Minnesota received a visit by administrators from the nine regional universities reorganized under Dmitri Medvedev’s educational reform, a hopeful sign that academic exchanges may rebound.

What impact, then, might the U.S. election have on policy toward Russia? President Barack Obama has reset relations, leading to progress on arms control and greater Russian cooperation on Afghanistan. But Moscow’s support for the Assad regime in Syria and a recent crackdown on non-governmental organizations at home have provoked further criticism of the Putin presidency. Meanwhile, Republicans accuse Obama of having downplayed human rights abuses in Russia and of failing to support countries in what Russia terms its “near abroad.” When the Republican candidate declares Russia to be “without question our number one geopolitical foe,” people are left wondering what policy changes may be in the offing.

In the presidential campaign, both parties hail U.S. global leadership, and any public deviation from this stance invites castigation as “declinism.” Yet, polls show growing popular support for domestic priorities, for “nation building at home.” This trend is all the more evident in a city like Minneapolis where two bridges have collapsed in recent years and winter potholes lurk in the streets, prompting concern about crumbling infrastructure and insufficient public investment. Public tolerance for costly foreign and military spending may cease to be a given, with consequences for our relations with the outside world, including Russia.

If the next administration opts to push harder against Russia, particularly on issues such as further NATO expansion or missile defense, tensions are likely to increase. Germany also vetoed the U.S. plan to speed up NATO membership for Georgia and Ukraine in 2008; revisiting the question could strain the alliance anew. The American “pivot” toward Asia risks awakening fears of encirclement in China on the eve of a major leadership transition there. Might China become more open to Russian entreaties to cooperate against U.S. policies, as appears to be happening on Syria, if both countries conclude that pressure is increasing? Foreign policy has played a minor role in presidential elections, but this may be changing here in the Midwest and elsewhere in the U.S, as voters become sensitive to the difficult tradeoffs between domestic needs and America’s global aspirations.

Thomas Hanson is University of Minnesota Diplomat-in-Residence and Oslo Center for Peace and Human Rights board member.