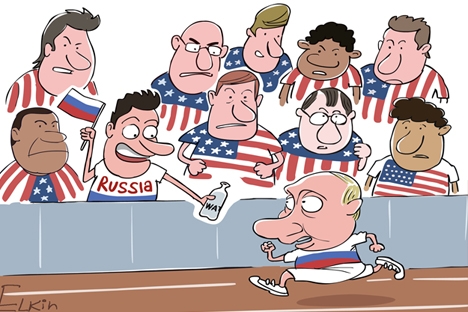 This past summer has been a dispiriting one for U.S.-Russian relations, and the prospects arising from the U.S. presidential campaign now underway are even less encouraging. One of the many misconceptions that Americans had about Russia after the fall of the Soviet Union was that it would embrace Western democracy – preferably a two-party system like ours – and soon become something like, say, France.  We were wrong in our prediction.  Russia has always been on her own trajectory, just as every nation fundamentally is.

Why do we think Russia ought to resemble the United States?  One would like to trace it back to what Alexis de Tocqueville said in “Democracy in America.” “Each of [these nations] seems to be marked out by the will of Heaven to sway the destinies of half the world,” but one doubts that is the source.  So why is it that we Americans are so obsessively interested – and usually agitated – by shortcomings we observe in Russia?  During the competition between two opposing social systems during the Cold War, it was perhaps understandable, but now?

First of all, Americans still confuse “Russia” and “Russians” with the “Soviet Union” and “Soviets.”  It is embarrassing to note the frequency with which speakers on Russian affairs here in Washington still – more than two decades after the collapse of the Soviet empire – make that simple slip of the tongue and refer to “Soviets,” when clearly “Russians” would be appropriate.  When a major presidential candidate declares that Russia is the “number one foe” of the United States, that is more than a lapsus linguae; however, the failure to distinguish between the two is part of a larger, and regrettable, pattern.

Among my own cohort of – now mostly retired – U.S. diplomats, I detect a difference in attitude between those of us who served in the old, extinct, Soviet Union and then in the Russian Federation, and those who served in the Soviet Union but then went off to Eastern Europe or to various of the “newly independent states,” many of which, of course, harbored serious anti-Russian grudges.  Georgia is a case in point.  (Disclosure: I served in the U.S.S.R. and Communist Czechoslovakia, but then also in the Czech Republic, St. Petersburg, Russia, and Armenia).  We who had the experience of working in Russia when hopes were high and Bill and Boris were the world’s power couple have a clearer sense of Russian realities, complexities and difficulties than those who have viewed it either from afar or through the distorted lenses of near neighbors. Then there is the simple question of having some elementary sympathy for Russia and Russians, which many “experts” on Russia seem so obviously to lack.

In my own case, as U.S. Consul General in St. Petersburg 1994-97, I knew and had a solid respect for the first deputy mayor of St. Petersburg, one Vladimir Putin.  He regularly attended events at our house, although my main contact was his boss, a great Russian democrat, Anatoliy Sobchak. True, Vladimir Putin had a past in foreign intelligence, but, as Henry Kissinger, who served for a time as co-chairman of the Kissinger-Sobchak Commission, is reputed to have said on being introduced to him, “all the best people got their start in foreign intelligence.”  My personal impressions of Putin, which were sought – but largely rejected – by some in the Administration when, in 1999, he surprisingly was named prime minister, were that 1) his main frame of reference is a legal one; 2) he both keeps his word and expects others to do so; 3) he puts great store in the facts and is little swayed by rhetoric, including most especially of the democratic populist sort that accompanied various “color” revolutions in the 1990s and 2000s.  In addition, despite some fairly wild accusations that have been leveled at him, the Putin we knew in St. Petersburg was primarily a crime fighter.  In fact, he helped us out on one occasion when some young American investors got into difficulties with the Russian mob.  Characteristically, the first thing Putin asked for when I called him was a copy of the text of the legal agreement governing the joint venture.  He might as well have been a lawyer, given his cautious, even legalistic approach.

No one with experience both in the old Soviet Union and in today’s Russian Federation could reasonably confuse the two.  I am stunned when I hear commentators referring to “Putin’s” Russia as an “autocracy.”  The Russian word, “samoderzhaviye” is rightly reserved for the role once played by the Romanov emperors.  Russia today may not come up to the democratic standards of Scandinavia, but the degree of central control is exaggerated.  In retrospect, we may have overstated as well the degree to which the Soviet Union, at least in the last two decades of its existence, was controlled by the Kremlin.  Freedom of travel, and even of emigration, has changed everything in Russia, and yet, sadly, we have just gotten around to the idea of repealing the outdated Jackson-Vanik amendment.

Contrary to what one would conclude from reading our mainstream media, there does exist an unprecedented degree of freedom of speech in Russia today, by historical standards, although it is true that it has been greater in the press than in the broadcast media, and that self-censorship does occur.  The recent horrified Western reaction to the trial of the “Pussy Riot” punk rockers has largely ignored the fact that they performed their ditty on the altar of the main cathedral of Moscow, Christ the Savior, not on some “stage,” as one account put it.  This was no doubt offensive to many Russian Orthodox believers, and would be offensive to many American churchgoers if it happened in their places of worship.  With our strict tradition of separation of Church and State, we Americans often have a tin ear for religious nuance.  At a Brookings event not long ago a Russian noted that Russia, “as a Christian nation,” was bound to care about Syria.  The tittering of the highly educated Brookings audience was notable.

Americans exhibit also tend to blame most problems in foreign countries with the leaders of those countries.  In the case of Russia, we do this in spades: everything that happens in Russia, be it the murder of a journalist or a case of corruption, is automatically taken to be Putin’s fault. The ridiculousness of this is obvious to anyone who takes time to think about it.  It’s as if the Trayvon Martin case was the fault of the governor of Florida.  In the most celebrated case, that of the tragic death of Sergei Magnitsky in detention, there is no evidence that Putin had anything to do with it.  In fact, why would any Russian president or prime minister want such a thing to happen?  Now, of course, the U.S. Congress is replacing the Jackson-Vanik amendment with the Sergei Magnitsky Rule of Law Accountability Act of 2012, just to show it has not lost its vigilance in championing Russian rights.  Even though the law has been given, in the Senate version, universal applicability, the fact that it is named for Magnitsky must rankle Russians mightily.  Russians know their country isn’t perfect. Few of them think that perfection will arrive in the form of grandstanding by the U.S. Congress.

In the case of President Putin, probably because of his KGB past, our media seem also to ignore some positive facts, such as his sponsorship of several threatened animal species, his sustained high ratings in reputable Russian polls, due in part to his popularity with women and pensioners, and the degree to which the progressive “reforms” pressed by Medvedev were nearly identical in substance to things Putin himself has advocated.  Medvedev, whom I also knew personally in St. Petersburg, is a Putin loyalist, by the way; no one ought ever to have thought otherwise during the period of the “tandem.”  As for Putin’s KGB past, I would simply remind readers that, as some Russians say, “the KGB was our Harvard.”  I can say that, having gone to Yale.  I guess one always needs to have an enemy.

John Evans served as United States ambassador to Armenia and was Consul General in St. Petersburg from 1994 to 1997.