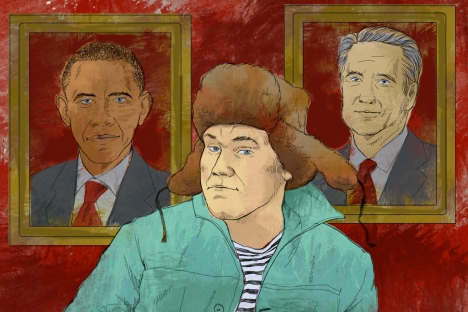 Many Russians are paying close attention to the ongoing U.S. presidential election. This attention has its roots on the fact that the United States still remains perhaps the only country whose opinion actually matters to Russia.

It’s safe to say that Russians are fed up with presidential elections. Having gone through a high-profile presidential election campaign at the beginning of the year – a campaign accompanied by heated and often nasty political rhetoric and then followed by a series of protest actions organized by the opposition – Russian citizens, to be sure, can live the next few years in quiet.

Naturally, there is even less interest in presidential elections in other countries. Who cares? Yet, there is evidence that many Russians are paying close attention to the ongoing presidential election in the United States, a happening that is only nine short weeks away from the finish line. This attention has its roots in deep, sometimes even bordering on obsessive, interest in all things American and – whether or not Russians themselves would be willing to admit it – on the fact that the United States still remains perhaps the only country whose opinion actually matters to Russia. It’s impossible to imagine a Russian who doesn’t know the name of the U.S. president.

So, if given a chance, who would Russians vote for in the U.S. presidential election: the sitting president Barack Obama, a Democrat, or his Republican opponent, the former governor of Massachusetts Mitt Romney?

Answering this question is tricky. For starters, even the electoral preferences of Russians living in the U.S. are far from clear. Back in the 1980s and 1990s, a consensus was that Russian-Americans overwhelmingly voted for Republicans. The explanation was that, being intrinsically “conservative,” Russians were better aligned with the conservative social and economic views of the Republican Party. Besides, as political refugees from the Soviet Union, they idolized the Republican President Ronald Reagan, whom they credited with forcing the Soviet leaders into allowing the Jewish immigration. After becoming eligible to vote, Russian-Americans poured their passion for Reagan onto his successor, George W. H. Bush, whom they supported en masse in 1988 and 1992. Or at least that’s how the story goes.

But much has changed since then. In the intervening years, scores of Russians came to the U.S. not as political refugees, but as skilled workers, bringing along a diversity of social and political views. And as aging refugees of the 1980s and 1990s are becoming more dependent on state programs, such as Social Security and Medicare, they may feel more appreciative of some policies traditionally associated with the Democratic Party. One thing is clear: These days, no Republican presidential candidate can take the “Russian vote” for granted. It’s hardly coincidental that the states with large numbers of Russian-American voters – California, Massachusetts and New York – remain solid Democratic strongholds.

But what about Russians living in Russia who are not versed in the intricacies of U.S. domestic politics and who view American politicians from mostly personal point of view?

One factor that would strongly play against Obama in the eyes of Russian “voters” is his race. It’s not a secret that a disturbingly large number of Russians hold negative, even derisive, view of Obama because he’s an African-American, a sentiment I witnessed first-hand myself during recent trips in Russia. One the other hand, Russians seemingly favor known quantities over unknown personalities and clearly have no problem with the politicians who’ve been in public service forever. From this point of view, many Russians would be expected to vote for Obama exactly because they’re used to him and know “what to expect.” Besides, even more importantly, Russians seems to consider Obama’s policies toward Russia as generally friendly. Otherwise, it would be difficult to explain the dramatic rise in U.S-positive attitude expressed by Russians in numerous public polls since Obama succeeded George W. Bush in 2009.

Another factor that would help Obama win over Russian voters is the strong anti-Russian position of his Republican opponent Mitt Romney. Gone are days when Russian pundits hailed “pragmatic” views of Republican presidential candidates on arms control and human rights. There is nothing “pragmatic” in the way Romney views the future of U.S.-Russia relations: He called Russia America’s “number one geopolitical foe” and went on record describing the New START nuclear arms control treaty as Obama’s “worst foreign-policy mistake.” In his acceptance speech at the recent Republican National Convention in Florida, Romney promised to intensify pressure on Russia over the issue of democracy and human rights. Few in Russia would doubt that under Romney the president, U.S.-Russia relations will be seriously damaged.

So, again, who would Russians vote for in the U.S. presidential election? Hopefully, a public opinion agency, such as Levada Center, will pose this question in one of its future polls. But in the meantime, I’d make a wide guess: 60 percent to 40 percent in favor of Obama. Just don’t let Vladimir Churov count the vote.