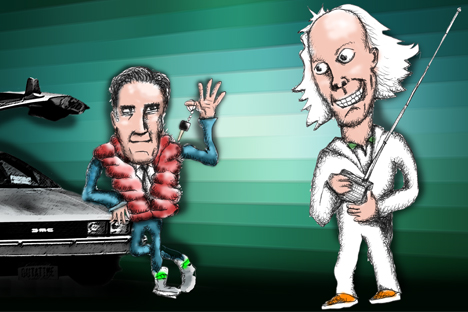 Despite the relatively prominent presence of a Russian theme in the Republican party’s platform and its candidate’s declarations, it is clear that Russia is not really very relevant in the U.S. election context.

The section dedicated to Russia in the 2012 Republican Platform opens with a surprising statement: “The heroism – and the suffering – of the people of Russia over the last century demand the world’s respect”.

And it goes on: “As our allies in their Great Patriotic War, they lost 28 million fighting Nazism. As our allies in spirit, they ended the Soviet terror that had consumed so many millions more. They deserve our admiration and support, as they now seek to reestablish their rich national identity”.

Romney keps the gloves off

This is followed by the customary urging of Russian leaders to reconsider the suppression of opposition parties, the press, and other institutions of civil society. Outside of its special section (which is, by the way, bigger than the paragraph devoted to Europe), Russia is mentioned twice. First, it makes the list of “gravest threats to our national security”, to which Republicans say the current Administration has responded “with weakness”. Other “grave threats” include the spread of transnational terrorism, continued belligerence of a nuclear-armed North Korea, and Iran in pursuit of its own nuclear weapons.

Secondly, Russia is mentioned in the context of a Republican pet-peeve: the ill-fated open-microphone promise from President Barack Obama to former-President Dmitry Medvedev to exercise “more flexibility” on missile defense if he wins a second term.

These are not awfully pleasant contexts, to be sure, but let us look at them in relative rather than absolute terms. For example, Republican Platform 2008 did not contain any kind words about Russia or Russians at all – only a condemnation of the country’s domestic policy and its aggressive attitude towards its neighbors. The rhetoric of this year’s document is also different from that of Republican presidential candidate Mitt Romney, who has repeatedly branded Russia “America’s number one geopolitical enemy,” perplexing not only his opponents but also many of his own allies.

Despite the relatively prominent presence of a Russian theme in the Republican party’s platform and its candidate’s declarations, it is clear that Russia is not really very relevant in the U.S. election context. In fact, it is not so much about any particular issue, as much as it is about the role America plays and should play in the world. The title of the chapter on foreign policy and national security says it all: “American Exceptionalism”.

The same section of Platform 2008 had a less pretentious and more pragmatic title: “Defending Our Nation, Supporting Our Heroes, Securing Peace.” This was, perhaps, because the Republicans had been in the White House for almost eight years by 2008, during which time they had survived an attack against the United States and started two wars. Then, Republicans had to look for answers to very specific security issues; now, from their standpoint as critics of the Democratic Administration, it is easier for them to indulge in slogan-waving hype. There is also another explanation. Traditionally, someone on the presidential ticket has had foreign policy experience or, at least, claims to be interested in international affairs. Neither Mitt Romney nor the candidate for vice presidency, Paul Ryan, can claim this kind of background.

Romney is guided by a Republican vision that is typical of the late 20th–early 21st centuries: a mix of ideas associated with Ronald Reagan and George W. Bush. There is little substance, employing instead countless appeals for the resurrection of America’s unquestionable greatness and for the end of mourning its fading glory – which the Republicans believe is exactly what Barack Obama is doing when he says that the United States should be looking for points of intersection with the growing centers of power. Romney professes his commitment to toughness and an adherence to principles because, relatively recently, less than a quarter of century ago, such an approach was very successful for the United States.

It is in this “wishful image of the past” that Mitt Romney’s bias towards Russia takes its roots. The candidate would instinctively like to return to the erstwhile bi-polar model, where everything was simple and easy to understand. This is because the main difficulty today lies precisely in the uncertainty of the strategic situation and an erosion of the front lines. It is not immediately clear who are the allies and who are the enemies – or, more precisely, these tend to trade places rather swiftly.  Even possession of force does not guarantee an understanding of how to deploy it correctly.

The Republican choice of candidate for vice presidency is, unlike Romney’s political vision, remarkable. Since the 1980s, politicians who have held this post have tended to be international affairs heavyweights. Paul Ryan has had nothing to do with this sphere at all; critics say all he is only interested in numbers and budget items. Ryan is a staunch and passionate advocate of public spending cuts and, given the scope of the U.S. public debt problem; that issue will certainly become an assault weapon in the attack on Obama.

The nomination of a candidate for vice presidency who is not interested in foreign policy is telling move. Even the Republicans seem to be coming to terms with the fact that, in the 21st century, America might simply be unable to afford to bet on dominating global affairs by sheer force.

Foreign Policy magazine recently noted that, even if Romney had wanted to continue the tradition of a “foreign policy” vice presidency, he would not have had a man options, anyway. The “aces” in this sphere are gradually leaving politics, being upstaged by politicians of a different nature. Case in point: the end of the career of legendary Senator Dick Lugar. He never ran for re-election, after losing a primary to a candidate from the extremely conservative Tea Party movement. Some commentators are even interpreting the Republican Party’s waning interest in foreign affairs as symptomatic of its increasing parochialism. If Romney wins, we will have a chance to see if this is true.