PACE finds a momentum for change 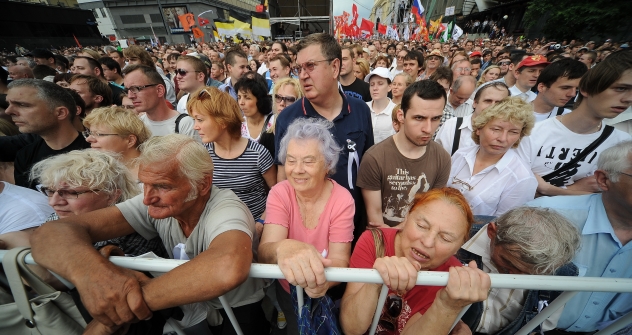 The June 6 March of Millions indicated a shift in Russian domestic politics towards more dialogue between the authorities and the people. Source: ITAR-TASS

The PACE Monitoring Committee report on the situation in Russia was less critical than previous ones, but still expressed concerns over a few recently-passed laws.

The Monitoring Committee of the Parliamentary Assembly of the Council of Europe gave a generally positive assessment of the environment for human rights and democratic freedoms in Russia in the past seven years. Of course, it also contained the usual criticisms concerning Pussy Riot, Sergei Magnitsky and the scandalous laws on public rallies and NGOs.

“The Russian Federation has reached a unique moment in the short history of the development of democracy in the country,” the report reads.

Russian experts had not expected such a balanced reaction from Europe, considering the severely critical tone of the previous report that was submitted in 2005. At that time, the Council of Europe claimed that “the strengthening of the vertical power structure” in Putin's Russia could sweep aside the system of checks and balances. PACE also voiced concern about freedom of expression in Russia, lashing out at restrictions on press freedom under the pretext of fighting terrorism.

Seven years later, the Council of Europe has noticed many changes for the better in Russia. For example, amendments to the law on political parties and the reintroduction of gubernatorial elections have since been introduced. PACE also welcomed the liquidation of investigative committees at the Interior Ministry and the Prosecutor's Office, which led to the subsequent creation of an independent Investigative Committee of Russia. Presidential amendments that softened punishment for economic crimes were also praised.

The report made special mention of the fact that dialogue has been opened up between Russian society and the government. Active participation of more than 100,000 people in the political life of the country in the wake of the December 2011 elections, the awakening of an extremely active civil society and the desire of authorities to head the call for reform have created “a momentum for change” in Russia, the PACE reports claimed.

At the same time, the report raised concerns over the actions of the judiciary, citing the trials of Mikhail Khodorkovsky and Pussy Riot. The Monitoring Committee considered the sentence passed on the participants of the “punk prayer” was disproportionate to the crime and was in need of immediate review. It gave a fair share of attention to the laws on meetings, rallies and NGOs passed this summer and brought up the case of Sergei Magnitsky, who died in detention in 2009.

Noting the strengthening of the executive branch and the shrinking of pluralism in recent years, the Committee called on newly elected President Vladimir Putin to make the system more democratic

The draft resolution recommended that Russia lower the “level of bureaucratic control over the creation and functioning of political parties” and resume “constructive dialogue with the opposition, and change the laws that may be used to suppress public opinion and freedom of expression.”  The Committee further urged the authorities to refrain from placing threats and excessive pressure on the opposition and the NGOs.

The PACE report has been met with mixed reactions in Russia. “The position is balanced and moderately critical; but it is one that encourages Moscow to not be afraid of the Council of Europe, to continue to use it as a forum to promote Russia's foreign policy," said Leonid Slutsky, deputy head of the Russian delegation to the Assembly.

By contrast, the opposition considered the draft resolution to be too soft. “The PACE Monitoring Committee should have set harsh deadlines for compliance with the obligations; instead, it makes do with platitudes," co-chairman of the opposition RPR-PARNAS party, Vladimir Ryzhkov, told Kommersant.

The report will be submitted to the PACE session in early October this year.