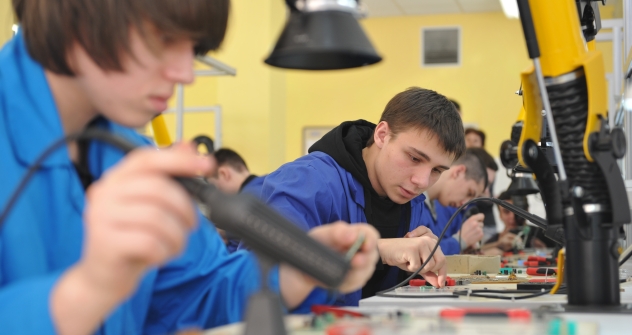 Professional technical colleges, long sneered at by universities, are beginning to squeeze their more prestigious rivals out of the marketplace. Some see college as a stepping stone to university; others prefer to learn the tools of a real trade, rather than receive a nondescript diploma.

In days gone by, the most practiced way of striking fear into the hearts of well-bred boys in Russia was to mention the prospect of entering — or, more precisely, “ending up at” — an establishment of secondary vocational education. All over the country, shrewd mothers frightened their sons: “If you don’t pass your finals, you’ll be off to technical college.” In Russian, the abbreviation for technical college is PTU, which has been used to coin several frequently-used derogatory terms.

Technical colleges equipped entrants with the skills to handle anything from a kitchen knife to mill machinery; but, in the eyes of the educated, these schools were considered to be, above all else, a place of refuge for the marginal and anti-social elements of society. Gradually, the disdain for technical colleges permeated not only the upper social strata, but practically the entire country. By the beginning of the 21st century, admitting that you were training to be a lathe-operator was a faux pas, and the only course of action for upwardly mobile young adults was to aim for a university, prestigious or otherwise.

Today, secondary vocational education has since been rebranded (and upgraded linguistically from PTU to “college” status), while higher education has gradually lost its seductive glow. There are several reasons for the latter. First, the ranks of universities - or institutes of higher education, as they are called in Russia - swelled, and not all of these were up to the educational mark. Second, due to massive over-registration for disciplines such as law and economics, the market became saturated with specialists holding nearly identical degrees. Meanwhile, salaries for qualified college graduates increased. Key areas of the economy clearly lacked trained professionals, while the service industries were awash with an excess of "professionals" with qualifications that were nominally higher.

“Just take look at the ratio of vacancies to resumes on recruitment sites in different fields. There are at least four or five candidates vying for every economics or law vacancy, while graduates in engineering or pharmacy can freely choose from two or three jobs,” said HR-analyst Marat Valitov.

The theory that Russia is producing a surplus of university graduates is indirectly backed by the Organization for Economic Cooperation and Development. According to the OECD, Russia ranks first in the world in number of citizens with higher education: 54 percent. The report explains that such figures are not the consequence of high demand but, rather, the consequence of a "historic" notion of prestige. Russian government officials have repeatedly drawn attention to what they believe is an excessive number of students in the country. The current trend is also disapproved of by the Ministry of Education, which estimates that nearly 30 percent of Russian universities are not fit for their purpose and could soon be closed.

Valitov’s opinion is shared by Timofei Shatskikh, an analyst at RosBusinessConsulting: “While the mismatch is still manageable in the major cities, in smaller administrative units the skewed ratios are catastrophic. Imagine you have a thousand people with a humanities degree, but only a dozen people who know how to drive a bus or make clothes.”

According to Shatskikh, graduates with fancy diplomas from nameless universities are only employable as bureaucrats in the civil service. They are expertly equipped to deal with the twin responsibilities of pushing papers and adding to the already sizeable administrative barriers faced by business. If the government really has decided to direct the economy away from raw materials toward real manufacturing, Russia needs a new breed of specialists. By the end of the first decade of the 21st century, graduates themselves had come to realize this fact.

"After ninth grade, I went to a technical college,” said Vitaly Romanov, a graduate in Logistics. “ I found a job immediately after graduation: the competition was minimal. It helped a lot that the curriculum had involved plenty of practical training. As a result, I now have a good job and a stable salary, while my former classmates are still studying. And they’re not guaranteed employment when they finish.”

Such subjective feedback is confirmed by the statistics: whereas in 1999 only 450,000 people had completed secondary vocational education, by 2006 this figure had shot up to 670,000. In 2011, the number was approaching one million. More and more people are opting to train toward a specific manufacturing skill and pursue employment that way. Of course, the profession “Lathe foreman” does not have the same prestige of “Tax consultant” or “Graphic designer,” but it is in considerably more demand. While newly-fledged white-collar grads bang unhappily on firmly closed corporate doors, their “less successful” classmates have long been earning a decent wage. In education, it may be time to admit that common sense outwits romance.