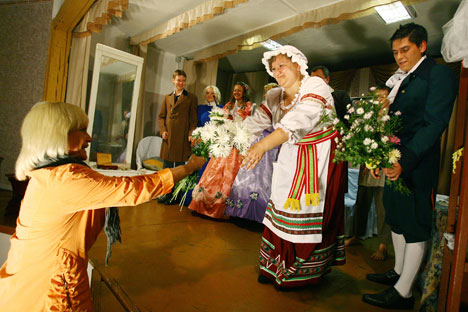 From Sept. 2 through Sept. 31, an amateur theatre festival is being held just outside of Voronezh, in the same village where the sister of the great director and teacher Konstantin Stanislavsky set up the first theatre for peasants in Russia 116 years ago.

“You'll find the community center where the tarmac stops,” — these were the directions given to the festival stage in the village of Nikolsky. The tarmac was more or less intact near the community center, but the houses opposite must have been boarded up for quite some time. The village had fewer than 50 permanent residents. The old are dying out, while the young are moving to areas where they can find work, shops, schools, hospitals, gas pipelines and mobile phone reception — all things lacking in Nikolsky. The festival audiences were made up of people from surrounding villages and “rooted” to this land. Amateur theatres in Voronezh Region brought in youth-filled support groups to the festival.

Elderly audience members dressed in shawls and jackets had been in their seats since morning, chatting about mutual acquaintances and cucumber yields before the first curtain came up. A one-legged old man hobbled in. He lived on the adjacent street (there are two of them in Nikolsky — the first is Stanislavsky Street, the other Zelenaya Street) and had not found time to visit the community center for the past eighteen months.

The festival “Theatre Meetings in Nikolsky” is held every two years on the first weekend of September. The best way to get there is from Voronezh: either by car (heading for the village of Malaya Privalovka in the Verkhnekhavsky region) or by bus. There are no hotels in Nikolsky or on its outskirts, so you might choose to spend the night back in Voronezh, which is about an hour away from the village. You could also try your luck and ask one of the villagers to put you up for the night. The festival program is not usually posted online, but for more information contact the Regional Center for Folk Art.

For the rural audience, the highlight of the show was a performance of poems written by Kolya Shalyganov, the poor, local, ill-fated orphan who died in a hospital in the mid-20th century.  After he was buried by strangers, a discovery was made: a notebook full of writings found under his pillow. His poems were published a few years later — Kolya's only stroke of good luck. On stage, the poems were interspersed with folk songs, ditties and everyday dialogues.  While “Kolya” recited up front, the women at the back of the stage were wiping away tears of sympathy.

“I prayed I wouldn't cry when singing the lullaby to him!” confessed Kolya's “mother” Valentina Barlukova. “During rehearsals, I would look at the audience and see the director's cheeks wet with tears. And I couldn't carry on!”

The actors of the Nikolsky Theatre adhered strictly to the Stanislavsky System, by living rather than depicting the lives of the characters. The audience members were swept away by it all. When actresses sang the famous song “Dark Is the Night” (originally performed in a Soviet film), the entire audience joined in.

The man who played the drunken tractor driver looked so convincing it was hard to believe it was really an act. “Alesha is an exceptional guy,” said Director Svetlana Sukocheva. “I love him, and I stand up for him. When he drinks everyone reproaches me. But so what if he's a hard drinker! He'll sober up and do everything you ask of him! He knows how to knit, sew, spin and weave baskets ... and, by the way, he’s not drinking at the moment.”

Many audience members also appeared on stage, at one point or another. In Nikolsky, there is an artist in every family. After all, as in other villages, the community center has always been the local hub.

“I've played in the theatre for 10 years. Every spare minute is taken up with rehearsals! Sometimes, just before going on stage, I've had to run off to see a patient, give an injection. And they never started the performance without me! We've acted in other villages too," said former nurse Raisa Shishkina.

The festival in Nikolsky takes place every other year, and has been running since 1994. On opening day, it is a tradition to remember the Sokolovs: intellectuals and doctors to whom the villagers owe their love of theatre. The houses the family built to replace the old burnt-out huts are still standing. The Sokolov's country estate is now home to a museum displaying genuine items that belonged to the family, such as a painting by Vasnetsov, a portrait of Chekhov with his signature, and photographs with Stanislavsky. Here clothing and utensils of peasants taught and treated by the Sokolovs can also be seen. And, of course, the museum also features costumes made for folk performances.

A few years ago, it appeared that amateur theatre was dying out in Russia. In the Soviet Union, amateur troupes often toured and enjoyed significant government support; but then the actors and audiences started to age. In the Voronezh region, however, the best folk theatres have survived. The actors include employees of cultural centers and social institutions, accountants, salespeople, pensioners and students. For them, just as for a teacher from the village of Vishnevka, the theatre is an outlet.

“I'd taken over a role in a play from a friend, who had gone off to work in Moscow. Previously, all my time had been divided between work and home. But now I go off to rehearsals on the weekends, and have a different outlook on the world," said the teacher, Valentina Barlukova.

Many young people from villages and small towns dream of becoming performing artists, but they know that it is hard to make a living that way — so they perform in their spare time. Villagers also enjoy attending their performances, as it is virtually impossible to persuade professional theatre companies to come and perform in the the countryside.

Russia's first peasant theatre was opened in 1896 by the Sokolovs: Zinaida, the sister of Stanislavsky, and her husband Konstantin, a famous doctor. Inspired by the ideas of Leo Tolstoy, they moved from Moscow to Nikolsky, “to enable at least one village to live a meaningful life.”  They treated the peasants and opened a school for the village children. The Sokolovs loved taking part in private theatrical performances, and the peasants were spellbound by them. They put on plays by Ostrovsky and Chekhov, rehearsing and performing in granaries.

Konstantin Stanislavsky stayed in Nikolsky in 1901, when he watched a couple of performances and was “literally knocked off his feet” by how energetic and natural the actors and audiences were. Afterwards, the director invited his sister and brother-in-law to his Moscow Art Theatre, but Doctor Sokolov declined, making the following reply: it was better to shine on the “peasant's” stage than to spend years in the capital waiting for a role. The doctor also felt that it would not have been right to leave the residents of Nikolsky without access to treatment.

In 1919 the doctor died after contracting typhus from the peasants. Zinaida Sokolova returned to Moscow, where she became a director at the Bolshoi Theatre's Opera Studio. In Nikolsky, the villagers’ love of drama continues to this day.