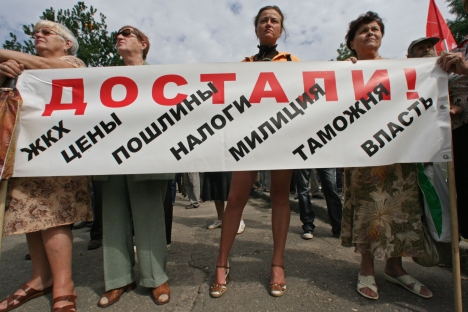 Kaliningrad is the most European of Russia’s regions. After studying life in the isolated Russian exclave, Kommersant-Vlast reports that it is becoming increasingly dissatisfied with the policies of the federal government.

Kaliningrad is a truly unique Russian region. Surrounded by European Union states, the region is an exclave with no common land border with Russia. The Kaliningrad region is the westernmost region, both in terms of its geographical position and, experts believe, in terms of the mentality of its residents.

A Disneyland in Kaliningrad?

Relations between Moscow and Kaliningrad can hardly be described as trouble-free. One high-profile example is the fate of the Kaliningrad Free Economic Zone, which was created in 2006 to boost private enterprise in the region. The status of a special economic zone supposed, among other things, the absence of an entry, value-added tax for enterprises registered in the region. However, the federal government periodically adjusts the list of goods covered by that rule. Every addition to the list of exceptions causes indignation among Kaliningrad’s businessmen. One of the most recent conflicts occurred in March of this year, when the Russian government banned duty-free import of cocoa fat, which is used in confectionary production.

“I don’t understand how you can just decide to deprive the region of the privileges prescribed by law,” Nikita Smelkov, director of a chocolate factory, said during the course of a roundtable meeting. “Our whole business is based on the absence of customs duties in the region.”

Businessmen claim that the laws being passed in Moscow do not take regional factors into account. They find neighboring Warsaw easier to understand than far-away Moscow.

An under-studied form of separatism

Vladimir Abramov, an associate professor of political and social studies at the Immanuel Kant Baltic Federal University, is a fierce opponent of separatism. Still, the fact that the federal center ignores regional factors inevitably pushes the population toward “social actions aimed at gaining greater autonomy.” He cites the following figures: 25 percent of residents in the Kaliningrad Region have Schengen multiple visas and 60 percent have foreign travel passports. Other regions in Russia, particularly those in which 80 percent of the population has never travelled abroad, cannot come close to approaching these figures. By the same token, more and more members of the middle class are using neighboring Poland and Lithuania as their “plan B.” This involves buying property in one of these countries, receiving a residence permit and enrolling their children in local schools there.

Last year, the daughter of a Kaliningrad resident was enrolled in the first grade at the local gymnasium. During a meeting with the pupils on the Sept. 1 holiday, the teacher asked them: “which Russian cities other than Kaliningrad do you know?” The children named Vilnius, Gdansk, Warsaw and Berlin. None of the 30 first-graders mentioned Moscow or St. Petersburg.

Youth is a distinctive feature of Kaliningrad’s separatism. Independence for the region is advocated not by forty-something political analysts, but by high school pupils, university students and graduates.

“The official neglect on the part of the authorities makes us wonder whether we should be part of a large state. We have a strong suspicion that we could fare better without Russia. Don’t help us, just don’t hinder us,” said media manager Ivan, a recent university graduate. “Our desire to break away from Russia provokes neglect and an arrogant attitude toward our region. The people of Kaliningrad suffer from small problems, whereas Russia as a state can only solve big problems. This contradiction is the breeding ground for regional separatism.”

“This is our first problem. We are in the heart of Europe, and have a generation of people who have never been to Russia,” the mayor of Kaliningrad, Alexander Yaroshuk, said. “But from childhood they have been making weekend trips to Poland, Lithuania or Germany.”

Four years ago, the government launched the “We are Russians” program, in an attempt to solve this problem. “Schools file applications and, during holidays, we take pupils to Russia by train and plane, show them Moscow and St. Petersburg, the Kremlin and Red Square,” said Yaroshuk.

The mayor recalls that only Chechnya and the Kaliningrad Region have federal targeted regional development program. “So it would be wrong to say that the federal center is not helping us,” the mayor said.

The opposition is less sanguine, however.

“Kaliningrad separatism is, at present, in a frozen, latent state. In the event of an adverse federal move (a visa scandal, for example) the consequences may be dire,” said a Kaliningrad Duma deputy Solomon Ginzburg, adding the traditional regional opposition phrase: “So far Moscow has done nothing good for us.”

We will always be an enclave

In December 2009, Kaliningrad broke the headlines in Russia when it saw thousands of people joining protest rallies that many political analysts believe were the harbingers of the subsequent Moscow protests. Arseny Makhlov, one of the organizers of these rallies, claims that, if all the disgruntled people had taken to the streets on that occasion, Kaliningrad would have seen a revolution; the only political demand people could have put forward would have been separation of the region from Russia.

Political activism in the region still runs high. The opposition in Kaliningrad is full-fledged, unlike in many of the other regions: they back every critical remark with a draft law, project or amendment. For example, Ginzburg and his colleagues are preparing for more active Russia-EU negotiations on the framework agreement for the strategic partnership in 2013.

“We have drafted a paragraph on Kaliningrad that is to be included in the agreement,” Ginzburg said. “We will forever be an exclave, and no other such regions will ever exist. So, we propose to unify standards with the EU. We cannot become integrated into the Russian economy, so we should work for export.”

One of the main tasks of the deputy’s supporters is to secure the adoption of a law “On the Kaliningrad Region, Exclave of the Russian Federation.” Ginzburg explained that the law boils down to greater autonomy within Russia, so that “we do not have to agree every step with Moscow.”

The article is abridged and first published in Russian in Kommersant-Vlast magazine.