Gazprom delays launch of oil production at its offshore field 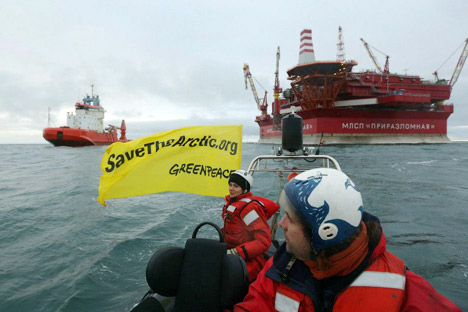 The delay of the oil production at the Gazprom field may have been caused by the recent actions of Greenpeace activists (pictured), who raided the platform in August. Source: Greenpeace Russia

The start of oil production at Gazprom-owned Prirazlomnoye field has been delayed until next autumn, a source close to the project told Reuters. Production was originally slated to begin in 2012. “The Prirazlomnoye platform is expected to begin drilling in March or April. The start of production is scheduled for September or October 2013. There is no need to rush,” the source was quoted as saying.

Prirazlomnoye is an offshore oilfield located in the Pechora Sea, in the southeastern part of the Barents Sea, 37 miles away from the village of Varandei. The field is estimated to have oil reserves of nearly 72 million tons, and Gazprom plans to produce 6.6 million tons of crude oil annually. Gazprom Neft Shelf, a subsidiary of Gazprom, is carrying out the project.

The abovementioned source has attributed the delay to “safety reasons,” but failed to offer any further explanation. Gazprom, for its part, has refused comment on the delay in the Prirazlomnoye oilfield launch. Gazprom Neft Shelf’s spokesperson was unavailable for comment.

It is possible that the delay was caused by recent environmentalist action. In August, a group of Greenpeace activists stormed the drilling platform, crossing the platform’s 200-foot exclusion zone and using mountaineering equipment to “hang” over the side of the structure. The activists were invited to climb to the top of the platform to have a constructive dialogue, but they refused, preferring to hang on the platform. The platform continued operating as scheduled.

Head of the Russian Greenpeace Arctic project, Vladimir Chuprov, told Gazeta.Ru that the decision to delay the start of oil production at Prirazlomnoye was in line with “similar decisions made by Shell and BP,” on their Alaskan and Canadian offshore drilling projects, respectively.

At the meeting, Donskoi  made a personal promise that special attention would be paid to Prirazlomnoye. The Rostekhnadzor inspection at Prirazlomnoye this summer uncovered eight violations sufficient to put a hold on drilling. “As of today, offshore projects are economically unfeasible when the company meets all of the environmental requirements – it turns out too expensive,” Chuprov said.

More than $4 billion has already been invested in Prirazlomnoye. “The peak production at the oilfield is estimated at 6.6 million tons annually; however, the same money, if invested in the existing energy efficiency program, would save around 60 million tons of oil. But, this program is not implemented,” Chuprov said. The Greenpeace environmentalist hopes that the Prirazlomnoye delay is only a first step. “The state should ideally impose a moratorium on Arctic shelf projects, if not ban them entirely.”

Raiffeisenbank analyst Andrei Polischuk is certain that Gazprom will not give up on Prirazlomnoye. “Too much money and efforts have been injected; everything is almost ready there,” Polischuk said. “The 12-month delay will cost Gazprom Neft an estimated $200 million in missed profits.”