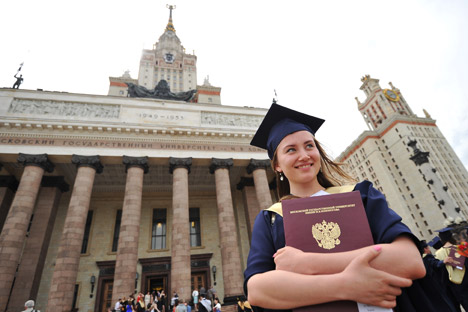 Russia is recognized as the most educated country in the world. But it’s high time to start thinking about the quality of education, rather than just the quantity.

One of my relatives called from home in one of Russia’s southern cities with joyful news – their 28-year-old son Pyotr had finally managed to graduate and get his degree. It hadn’t been an easy ride for him – in fact he’d been thrown out of three successive colleges for consistently poor grades. But Pyotr's parents never gave up and kept digging into their pockets to pay his admission into the next university.

“So, what's our new graduate going to be doing?” I asked his overjoyed mother. “Oooh! He's going to be fixing up mopeds!” came her elated reply.

Less tactful people than I might have enquired why Pyotr had tortured himself with a decade of higher education, only to go and get a job fixing mopeds. But I was the soul of discretion with his mum – besides, I knew the answer. As soon as little Pyotr was born, his mother had conceived an unshakeable mission to hang a university degree on his bedroom wall – at any cost. And she's far from being the only mother with such ambitions.

A study undertaken by the Russian Public Opinion Research Center found that 80 percent of Russians want their children to get a higher education; only 12 percent believe that success in life can be achieved without a university degree. This level of motivation toward the acquisition of knowledge has the potential to be a powerful resource for Russia's national development, argues Irina Abankina, director of the Institute for Educational Studies at the Higher School of Economics (HSE). It offers the chance to build an innovation-based economy.

On the one hand, the high standing of higher education is encouraging, as well as cause for pride. It is no coincidence therefore that – according to a September report of the Organization for Economic Co-operation and Development – Russia ranked first in the world for the percentage of population that has completed higher education. Fifty-four percent of Russians in the 25–64 age range hold university degrees.

On the other hand, serious questions arise about the quality of this education and the extent to which these degrees are really in demand.

University degrees were very highly regarded in the Soviet Union, and this created fierce competition for places. Back then, there were only 600 universities and institutes serving a population of 300 million people. Today's population of 140 million has access to nearly 3000 institutes of higher education.  The change came in the 1990s, when the newly-opened free market jumped into action to meet public demand. “You want a degree? No problem! Just pay the right money and your child is a certified professional!”

Newly-accredited “Academies” and “Universities” sprouted in every imaginable location. Institute-level education became so widely and easily accessible that its value devalued very quickly. Now it seems that this boom is coming to a halt.

The Ministry of Education has set itself an ambitious target – to reduce the number of higher education institutions by nearly one-third. December will see the publication of lists of institutes categorized as “inefficient”, and a program for their reorganization will begin in May of next year. Some of those on the list will be absorbed into more successful institutions. Others will be forced to pull their socks up – and those who fail to do so will be closed down.

The remaining institutes will be under obligation to demonstrate that they truly deserve to be called an educational institution. In practice, this means participating in academic research, advancing science and inviting lecturers and students from other countries. In other words, it means becoming competitive on the international education market.

Things are more complicated than they might seem. Not a single educational facility in Russia has managed to break into the top 100 universities in the world. In the recently published QS World University Ranking 2012, Moscow State University came in at number 116, while St Petersburg University was ranked 253.

However, Abankina suggests that an objective view is worthwhile. “Moscow State University’s ranking of 116 out of 800 is not at all poor, if we take into account that competition for listings is very high – especially among universities from the Pacific Rim countries.”

There’s additional good news too. Other Russian universities have improved their ranking in the list by dozens of places, including Bauman Moscow State Technical University, the Higher School of Economics, the Moscow State Institute of International Relations and Novosibirsk University. Other universities have appeared on the list for the first time, including the Plekhanov Russian University of Economics in Moscow, and the Far Eastern Federal University. Abankina believes the overall trend is positive.

Experts cite several reasons for why Russian universities fail to reach the leading positions on the list. The most significant is the gulf between university education and science in Russia. There’s a Soviet-era legacy of high-level scientific research being undertaken at scientific centers that are under the umbrella of government ministries. This contrasts with practices in Western countries, where universities, science and education are inextricably linked. The result is that fewer papers are published by scientists at Russian universities, compared with their peers in Western universities.

Abankina also lays the blame on the language of instruction, along with the painfully slow transition to the Bologna system, and the chronic lack of funds for programs that bring visiting foreign professors to Russian institutes.

As usual, money tops the list of problems. The top-ranking Russian universities are still fully state-funded; they simply cannot compete with the leading institutions in material terms. The budgetary resources of institutions such as Harvard or Yale would exceed the entire annual budget of the Russian Academy of Sciences. The world’s highest achieving universities are, generally speaking, funded primarily by endowments and private donations. On this solid financial basis, they can undertake serious research and attract the best academics.

The desire to avoid the devaluation of higher education is not the only motivation behind a reduction in the number of Russian institutes. It is also an attempt to assess which universities would most benefit from increased funding, so that limited budgets are put to better use. Moreover, there’s an agenda here for the near future: at least five Russian universities or institutions should feature in the top 100 universities in the world.

In the Soviet Union, people were proud of the fact that they lived in “the world’s most literate country.” But that claim was made on the basis of the production of books and periodicals – which stretched well into the millions – rather than statistics on who was reading them.

For Russia to boast that it is “the most educated country in the world” today requires something more than simply adding up lists of universities or the number of degrees they hand out.