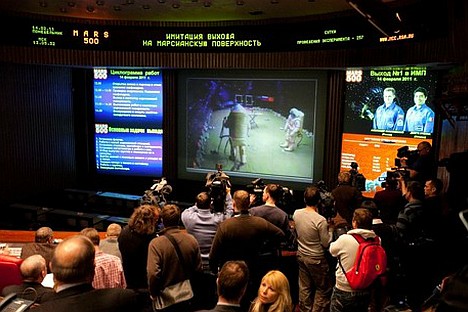 It seems the next step in mankind’s journey of discovery in the solar system will be Mars. According to Vitaly Lopota, president and general designer at Russia’s Rocket and Space Corporation Energia, Mars is the only planet in the solar system that would be suitable for human colonization.

“Over the next 50 years, Mars will be the focus of space research and exploration,” Lopota said at the recently-held 7th International Aerospace Congress in Moscow. Explaining why Mars is the only other planet in the solar system that could support mankind, Lopota pointed out that Venus would be fundamentally unsuitable, since its surface temperature hovers around 500ºC (932°F) and its air pressure is twice that of the atmospheric pressure on Earth.

“The only other option is Mars. This planet could be a relatively comfortable place to live — air pressure is just a hundredth of what it is on Earth. When looking into the task of space colonization, Mars is a good place to start. Moreover, Mars is the only planet with enough water to support humans,” said Lopota.

Russian scientists have already developed selection criteria for recruiting a team to fly to Mars. When choosing the right people for a prolonged, piloted mission, the two foremost criteria are good genes and strong physical and psychological attributes, says Anatoly Potapov, a researcher for the Institute of Biomedical Problems at the Russian Academy of Science.

“In choosing a team for a Mars mission, we are mainly looking for genetic attributes and top results on rigorous physical and psychological tests,” Potapov said. “We now have every tool at our disposal to help develop a system that will ensure the biomedical security of the Mars mission. The International Space Station is a particularly useful resource for preparing future interplanetary expeditions.”

According to the researcher, specialists are hoping to create a unique medicine module in the Russian section of the International Space Station (ISS), to draw on the results of the Mars-500 experiment that took place between June and November of last year.

“We have 20 years to prepare structures that will ensure biomedical security for prolonged orbital and interplanetary flights. We are currently able to carry out research using unmanned spacecraft and biosatellites; we can conduct insulated bio-molecular experiments, conduct model experiments in isolation; we can look into modeling the state of weightlessness, and conduct research in the extreme conditions of the Arctic, the Antarctic and the desert,” said Potapov.

Specialists at the Institute for Biomedical Problems believe the most pressing task for getting interplanetary expeditions off the ground is to find a way to isolate and render self-sustaining the life-support system in space. To create such a system that guarantees the regeneration of vital supplies, scientists need at least 10 years. The main problems facing scientists remain how to ensure a constant production of oxygen, water, food, and how to eliminate metabolic waste products.

The Mars-500 experiment did much increase scientists’ understanding of how humans cope with prolonged periods in space. Nevertheless, scientists managed to recreate some of the conditions cosmonauts would have to contend with on a real flight. Victor Baranov, as assistant director of the Institute of Biomedical Problems, explained that a similar experiment is set to be conducted with chimpanzees: “They will be subjected to the same radiation levels that are in space, whereas other issues will be examined using human testers…”

Unfortunately, solving these matters will not yield conclusive answers regarding the consequences of spending long periods of time in space. Weightlessness is very dangerous to the human body, and the Mars-500 was unable to go so far as to model the total lack of gravity in space. Thus, it remains unclear as to whether or not humans will physically be able to cope with prolonged periods of exposure to anti-gravity conditions.

American scientists believe that people who have spent prolonged periods of time in space suffer from a loss of bone density. Observations carried out on 13 astronauts, each of whom had spent six months at the ISS, revealed that their skeletal mass had decreased by an average of 14 percent since they left Earth.

Unimaginable distances from the Earth; the long monotony and isolation of space travel; the cramped conditions on board the spacecraft; the strange sensation of weightlessness; personal tensions within the team; the substantial workload, both on board the ship and out in open space; the unpredictable nature of the job; the huge risks involved and a sense that the entire mission rests on your shoulders - these are all stresses a cosmonaut has to contend with daily, and they can end up having a serious effect on the psychological condition and ability to function.

For missions to Mars, ground control would be able to do little to help in this respect. Up until now, cosmonauts have had teams of psychologists on hand at mission control, and support has always been readily available where the signal conditions were good. However, signals from Earth will take 40 minutes to reach the “Red Planet,” regardless of the many decisions will have to be made in a split second on Mars.