Laying out a welcome mat for new investors 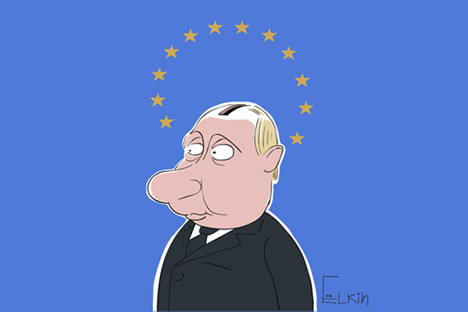 Since Vladimir Putin's presidency, the improvement of the business climate has been firmly established as one of the central issues for the policy agenda.

Click to enlarge the image. Drawing by Sergey Yolkin

It was in his remarks at an investment forum in Moscow in February that then Prime Minister and now President Vladimir Putin presented his vision of promoting Russia from 120th to 20th spot in the World Bank’s respectful Doing Business survey.

Since then, the improvement of the business climate has been firmly established as one of the central issues for the policy agenda.

There is more than one reason that this policy has commanded much more tangible traction than most pragmatically skeptical observers assume. First, the broader economic policy vector has shifted the emphasis to investment demand and productivity growth as the principal ingredients of Russia’s growth paradigm. For Russia’s investment-to-GDP ratio to expand from 20 percent to 25 percent by 2015 and 27 percent by 2018 as suggested in the president’s objective-setting decrees of May 7, a radical improvement in the ease of doing business is indeed the critical precondition.

Second, the tighter budget constraint of the Russian government makes the authorities more directly interested in increasing the depth of Russia’s financial markets and securing higher prices for the Russian financial assets. The government is now a regular net borrower in the debt market, hence, the liberalization of foreign investors’ access to the local bond market can no longer be postponed. It also contemplates the grand privatization agenda which, if implemented as planned, would amount to many tens of billions of dollars over 2011-16. The 10 percent VTB stake sale in February 2011 and recent 7.58 percent Sberbank sale just this week are the most prominent highlights of this plan rolling ahead. In a nutshell, the government has greater skin in the game than ever in the aftermath of the 1998 crisis is becoming increasingly confident in its role as a player.

Third, even though many items on the investment climate checklist are yet in a fairly early stage of detailing and policy design, several pieces, including the market infrastructure enhancement, are already falling into place. On this count, the creation of the Central Depository, legislated for in late 2012, entered the final stages of implementation. The emergence of the Central Depository will open the door for such crucial steps as euro clear ability of Russia’s local securities (first and foremost Russia’s local sovereign debt, OFZs), the introduction of T+N settlement procedures for equities, and the eventual abolishment of limits on the size of depository receipts programs by Russian issuers. The progress along that path will have tangible results for the scale of the foreign investors’ participation in the Russian capital markets, enhancing their depth, reducing volatility and ultimately lowering cost of capital for the Russian corporations.

To sum up, the investment climate enhancement policy talk is no longer a fashionable posture, but reflects the need to support the shift towards a more investment-intensive growth model. As this need is already quite urgent, the progress along the path may be more rapid than that perceived by the pragmatic skeptics.

Alexey Zabotkin is head of investment strategy at VTB Capital.