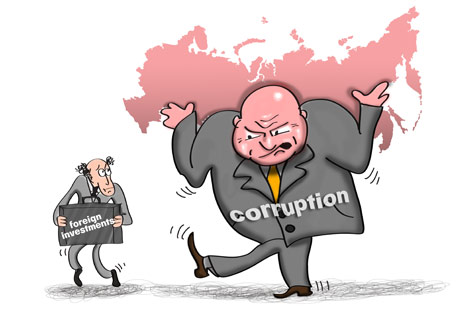 Despite the fact that today Russia offers many opportunities for foreign investors, the country still remains unpredictable and risky for doing business.

There are many reasons to do business in Russia. The country’s geographical location between Europe and Asia, a highly educated population and favorable tax regulations for both businesses and residents are just some of these.  At the same time, in spite of active measures taken by the state, the Russian economy is still very unpredictable and risky for new businesses.  This is largely due to the high level of corruption. Russia ranks 143 out of 183 countries in Transparency International’s Corruption Perceptions Index.

Related: What kind of capitalism has Russia built?

While Russian entrepreneurs find corruption to be commonplace, for foreign entrepreneurs, it is often the decisive factor in choosing another country in which to do business.

One of the problems Russia has in fighting corruption is the lack of simple and clear rules for doing business. Although Russia ostensibly has an independent judiciary branch, in reality entrepreneurs are unable to rely on equal protection of their rights and interests.

Businesses also face a daunting gauntlet of regulatory agencies responsible for fire safety, occupational safety and health requirements before a new venture can be established. Additionally, opening a business in major Russian cities is expensive because of stiff competition, high property rents, and additional business checks conducted by the local supervisory authorities.

In Russia, it is also extremely difficult to compete in those branches of business in which representatives of the domestic business elite occupy decisive positions.  This is due to the confidence that the state places in these entrepreneurs and their disincentive to allow the entry of new players into markets that hold strategic importance for them. Energy and extraction industries, considered crucial to Russia’s commodity-oriented economy, are virtually inaccessible to foreign entrepreneurs.

The law aims to attract and encourage the effective use of foreign material and financial resources, advanced machinery and technology and managerial expertise, as well as to ensure stable conditions for foreign investors and compliance with the applicable legal structure of foreign investment norms provided by international law and the international practices of investment partnerships.

Unfortunately, the above provisions of the law are purely declaratory in nature, and they do not apply in practice. This is largely true of statutory guarantees of investor rights, which are a key factor in attracting investments.

The law is not sufficiently integrated into Russian legislation, and it does not cover all possible areas for investment. Investment legislation also does not have the required consistency and contains contradictory provisions.

A new way to get what you want

Beginning a top-down attack on corruption

Russian investment legislation at the regional level is fragmented, contradictory and does not provide investors with effective mechanisms for investment in the economy of Russia's regions. Regional investment laws often do not take into account the specific characteristics of the region, which also prevents the most efficient use of investment benefits.

The lack of coherence and multiple contradictions in the federal and regional legislation adversely affects the investment attractiveness of Russia as a whole. Russia has still not created state agencies that are designed to attract investments and perform investment activities. The creation of such bodies would not only delineate the scope of competencies between the state authorities in Russia, but also create the necessary legal framework needed to effectively attract investments.

These deficiencies indicate a lack of active participation of the state in regulating investment activity. The lack of necessary coordination between state and regional agencies as it relates to the improvement of investment legislation is also telling.

Aleksander Bryantsev is a lawyer at the law firm LEVINE Bridge, Corporate Department.