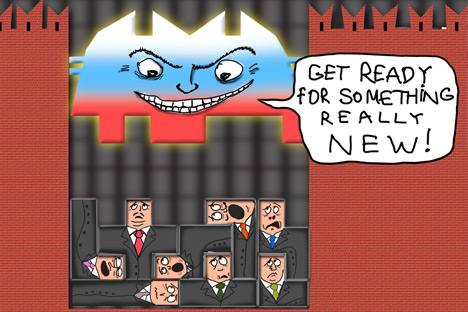 Not a Western free market, and not a China-style economy controlled from the top-down, Russia’s economic model benefits the few at the expense of almost everything else.

According to a recent Bloomberg Global Poll, fewer than one in four businessmen say free enterprise is working as it should; a majority of them believe that governments must do more to address economic uncertainties. So it is no wonder that state capitalist model that is successfully working in some emerging economies, notably China and Brazil, is now widely discussed by economists and media as an alternative to the neoliberal mode of capitalism.

State capitalism endorses not only macroeconomic regulation of the market economy, but also its direct guidance. It is achieved along lines set by the state industrial policy, which is followed by state-owned enterprises and funded by state-owned banks. This mechanism of economic governance has so far allowed China to ensure a fast and sustainable growth that is led by domestic investments and exports. The policy of sponsoring the expansion of state-owned enterprises in basic and technologically advanced industries as well as encouragement of private enterprise and innovation made China a yet unrivalled global factory. Now, when the developed economies are entering economic depression, Beijing is employing the mechanism of state capitalism to curb inflation, slow growth and soft-land the economy.

Nothing of the kind happens in Russia. Speaking last June at the St. Petersburg International Economic Forum, President Dmitry Medvedev said: “I want to state very definitely - we are not building a state capitalism.” President-elect Vladimir Putin has promised to reduce the government’s role in the economy by 2016. In an article published last January in business daily Vedomosti, Putin proposed to partly privatize dealing with state-owned enterprises working in the high-tech sector, such as Rosatom and Rostekhnology. Even Russia’s prime national champion Gazprom is planning to shed a number of the companies it owns outside its core business in the gas industry.

Does this mean a radical change in the Kremlin’s policy of funding a few state-owned industrial conglomerates in key manufacturing industries? Not exactly. The creation of these conglomerates in 2007 was dictated by an acute necessity to overcome the country’s economic and technological decline, which was caused by wild privatization in the 1990s. It was a bitter realization on the part of the Kremlin that reliance on market forces alone was a mistake and that state interference was needed to make the economy diversified, innovative and competitive, and thereby meeting the challenges of globalization.

The Kremlin is still remains loyal to ideology of liberal capitalism, but it lacks a comprehensive economic development strategy and a mechanism for its realization. However, two things are certain. Though Russia’s future development trajectory now exists only in Putin’s pre-election promises, there is little doubt that a new government will go ahead with privatization of state-owned companies. And, paradoxically, it will also be forced to consolidate others and buy back some privatized companies.

The latter trend is best illustrated by recent developments in the Russian energy sector. Since 1990s, the production of electricity has been a pilot industry for privatization. It was expected to show economic efficiency at lower prices thanks to inflows of private investments. However, when the energy sector reform was completed in 2008, businesses and ordinary people alike were being slapped with higher and higher electricity bills. Private investors in the sector were not happy either and began to sell their assets. As a result, energy conglomerate “Inter RAO” and other state-owned business have regained control of over a half of Russia’s total power generating capacity and will soon bring their share to two-thirds.

Although fully or partly state-owned companies account for a substantial share of Russian stock market valuation (62 percent, compared to 80 percent in China) and state-owned banks control over half of banking operations, the absence of consistent industrial policies has become a cause of rather variegated state presence in the economy. Last year, Russian business weekly Business and Power analyzed the level of state participation in key sectors of economy by estimating the government’s share in companies’ total shareholder value. The analysis showed that state participation is most pronounced in transportation (railways, oil and natural gas pipelines) where the government holds 75 percent of assets. Then come aerospace and shipbuilding (57 percent) and natural gas production (50 percent). The state share in production of electronic hardware is 27 percent, in machine-building – 15 percent, in telecommunications – 14 percent, in construction – 9 percent. In the oil industry, the state owns 23 percent, but in oil refining only 8 percent. Private capital completely dominates in the steel industry while in non-ferrous metals production the government holds 3 percent of shares.

In contrast to China, where such state-controlled giants as Baoshan Steel, China Mobile or Huawei are recognized global players, in Russia only Gazprom is a globally recognized heavyweight. In reality, the most lucrative sectors of the Russian economy belong to a handful of Kremlin-friendly oligarchs whose conglomerates have actually become Russia’s business flagships in expansion abroad.

As a result, the Russian government can only indirectly influence the economy’s performance since the role of state-owned businesses even in key industries is either limited or non-existent. This makes state governance of the economy no less important than state macroeconomic policy. Not counting the ad hoc “manual management” of enterprises and whole industries that has been from time to time practiced by Putin, formally all Russian companies enjoy a liberal economic regime for doing business. However, their business is closely monitored by numerous federal bodies as well as by regional and local administrations, tax-collecting and law enforcement agencies.

This scrutiny, which often unravels into direct interference under the pretence of violation of law or state regulations or on manufactured charges, makes the business environment in Russia far from liberal. Bribery and the abuse of the law by law enforcement flourish despite multiple promises to curb corruption. Business confidence, especially among small entrepreneurs, is very low, which is not conducive to honest commerce, innovation and development of new products and services. Changeable government mid-term and long-term development programs are just general guidelines for business and avariciously funded from the federal and regional government budgets or investment outlays. Though Russian businessmen make a lot of money, they prefer to keep it abroad rather than invest at home, even as Russia desperately needs private investment for upgrading industries and infrastructure.

Envious of the Chinese economic miracle, Western observers are often reluctant to recognize that it could hardly be achieved without the Communist party and the government guidance of the economy that integrates administrative and financial control of state businesses with encouragement of private enterprise. Although officially Chinese state-owned enterprises are owned by the State-Owned Assets Supervision and Administration Commission, it is no secret that key socio-economic policy as well as administrative and financial decisions are made by the Politburo’s Standing Committee and implemented through the Communist Party Organization Department. The latter not only supervises performance but also regulates remuneration, sacks and appoints top mangers.

Working in a capitalist environment, China’s Communist elite could not help becoming wealthy. It is rumored that the National People’s Congress is a convention of millionaires while this May’s issue of Forbes magazine writes that China has 95 billionaires compared to Russia’s 96. However there is a great difference between the relationships of Chinese oligarchs with Beijing and, using Putin’s expression, the “ecstatic embrace” of government officials and businessmen in Russia. The top Chinese managers are at pains to follow the party line whereas their Russian colleagues prefer to resolve problems with government executives in a private way.

The disregard and abuse of national interests is especially spectacular among owners of oligopolies and big business conglomerates with close connections in the Kremlin and in regional administrations. The imprisonment of Michael Khodorkovsky in 2003 created an impression in the West that Putin was calling the Russian oligarchs to order. But in reality, the oligarchs continue to supervise and direct government economic and industrial policies. They keep top state officials on their payroll or make them confidential beneficiaries of their businesses. It is a fact that about a dozen of top managers in Russian state-owned companies are former colleagues of Putin from the KGB or the St. Petersburg mayor’s office.

It would be wrong to believe that after the recent elections, the governance of Russia’s economy would become reliable enough to withstand any turbulence in the global economy, especially in the oil market. The minimal majority of the ruling United Russia party in the Duma and the divide between society and the business elite that splashed out in mass demonstrations during the presidential election campaign make Russia’s political future very uncertain. Everybody recognizes that Russia needs political reforms and radical improvements in governance of the economy. And many wonder why Russia displays, as the Economist weekly put it, “a highly unusual form of capitalism, dominated by a handful of gigantic firms and controlled by a clique of security officials.”

Exiting president Medvedev and president-elect Putin may deny that Russia’s powers-that-be are not building state capitalism. But deny it or not, over two decades Russia has been breathing hard under a worse socio-economic system - a state-oligarchy capitalism.