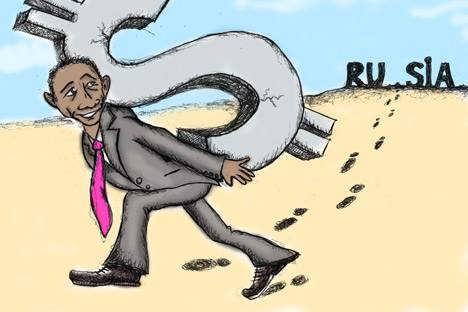 What will the U.S. government reap from the money it is now sowing into a fund to promote democracy in Russia?

Conventional wisdom – and Republican presidential candidate Ron Paul – say that providing financial aid to foreign countries is a shameful waste of U.S. taxpayers dollars.  However, a recent story in the New York Times suggests that this common believe, believe it or not, American politicians could actually be wrong on this point.

According to the story, in 1989, Congress approved legislation allowing the investment of U.S. federal funds in the former communist countries of Eastern Europe and Central Asia – to help them develop market economies.  Far from being wasted, these investments turned to be quite successful, having generated a lofty $2.3 billion in returns.  Part of the proceeds was returned to the Treasury, but some of the money has been stuck in Congress for years.  Now, the Obama Administration wants to redirect a $50 million generated by the U.S.-Russia Investment Fund into a “civil society fund” that would underwrite democracy promotion in Russia.

The timing of the announcement is hardly coincidental.  The Obama Administration has finally gotten serious about repealing the Jackson-Vanik amendment, the notorious relic of the Cold War that still deprives Russia of the permanent normal trade relations status as a punishment for restricting Jewish emigration in the 1970s.  The effort has been met with a stiff resistance by the Republicans on Capitol Hill.  While agreeing with the White House that the amendment should go – as keeping it on the books now, that Russia is joining the WTO, will hurt interests of American companies – Republicans argue that something else should be put in place to hold Moscow accountable for what they habitually call “human-right abuses.”

A natural successor to the amendment would be the so-called Magnitsky bill, a piece of legislation bearing the name of Sergey Magnitsky, a whistleblower who died in Russian police custody in 2009.  The bill introduced by Sen. Ben Cardin (Democrat-Maryland) last year would impose a U.S. visa ban on Russian officials implicated in the Magnitsky death and would also freeze their financial assets in the U.S.  The administration, however, considers the bill “redundant” on the ground that last summer, the State Department already composed a list of 60 individuals related to the Magnitsky case whose entry in the U.S. was to be prohibited.

Trying to prevent the adoption of the Magnitsky bill – which, as the White House believes, will have negative impact on the future of U.S.-Russia relations – the administration is now using every opportunity to demonstrate to its critics that it takes seriously the issue of human rights in Russia.  Assistant Secretary of State Phil Gordon recently boasted that since 2009, the United States has spent “more than $200 million seeking to promote democracy, human rights and civil society” in Russia.  Although Mr. Gordon didn’t explain what kind of return, if any, the U.S. had gained from this investment, the very creation of the “civil society fund” with an additional $50 million indicates that the Obama administration considers this investment strategy worthy of pursuing.

It remains to be seen whether the new “democracy promotion” investment fund will succeed in mollifying the critics of Obama’s Russia policy.  Yet, it’s already clear that by making this decision, the administration showed its inability to correctly evaluate the situation on the ground.  The anti-American sentiments in Russia that have risen sharply in recent months show no signs of abating.  In large part, these sentiments are fueled by constantly repeated insinuations that the protest actions organized by the Russian opposition are funded by the U.S. State Department. The U.S. could hardly have done more to help the Kremlin propaganda machine than announce an additional “democracy promotion” money flowing to Russia!

U.S. ambassador to Moscow Michael McFaul, whose multiple responsibilities apparently include informing President Obama on what’s going on in the country, made an attempt at damage control:  in a post to his Twitter account, McFaul wrote: “The U.S. govt does not & will not fund Russian political parties, movements, candidates, or politicians, only exchanges & non-partisan NGOs.”  McFaul’s calculation seems to have been that, when re-tweeted by his 20,000+ followers, his message will be well spread all across Russia making any official explanations redundant.

In 2009-2011, Presidents Obama and Medvedev worked hard to establish trust between the two countries.  It’s sad to watch how this precious capital is now being wasted in both countries to achieve short-term political goals.  With this trend continuing, we may well see the policy of the “reset” going bankrupt.

Eugene Ivanov is a Massachusettes-based political analyst who blogs at The Ivanov Report.