Otis elevates its business in Russia 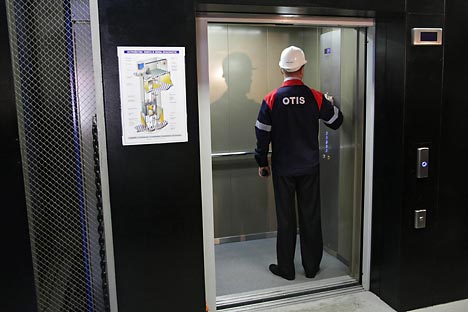 By building strong local relationships and investing in its employees, elevator manufacturer Otis has found success in Russia.

The company made its first investment in Russia in 1991, when it signed a joint-venture agreement to operate in St. Petersburg. In 1992, a similar agreement establishing Mos Otis was signed in Moscow. An Otis factory in St. Petersburg began production in 1993 and soon Otis Russia became a major supplier of elevators and provider of the elevation equipment maintenance services across the country.

Today, Otis Russia employs more than 4,000 people. It operates four factories in Russia, which manufacture more than 10,000 elevators annually, and its maintenance network services over 82,000 elevators in 45 Russian cities. The company’s market share in sales of new elevator and escalator equipment is over 30 percent, and in maintenance of elevators, 16 percent.

Along with being the industry’s largest manufacturer, the company is also a leader in technological development, constantly creating and introducing advanced elevator designs and technologies. Recently, Otis introduced to the Russian market the environmentally friendly Gen2 elevators, which set a new standard for performance, reliability, design flexibility and comfort while reducing energy costs throughout their lifecycle.

Vardan Avakyan, the CEO of Otis Russia, attributes the company’s success to its focus on establishing deep local roots. From the beginning, Otis worked to create a good working relationship with local authorities in the regions where it operates. The company also put substantial time and effort into recruiting and training local employees who could grow with the company.

Otis also focused on maintaining its high ethical and production standards in its Russian operations. All these elements helped the company establish a new business environment and create potential for growth.

“We are proud that our products are genuinely made in Russia. This is a direct consequence of our efforts to educate local contractors in manufacturing components and details in quantity, quality and just-in-time delivery as we need them,” Avakyan said.

The company learned how producing exclusively in Russia could benefit them a few years ago. “In 2009, our company had to change a foreign supplier of push buttons for elevator car operation panel in favor of a local factory because of the ruble depreciation against the dollar,” said Igor Mayorov, Otis Russia’s manufacturing director.

In just six months, the Russian contractor designed and manufactured a new type of button that proved to be more reliable and cheaper than the foreign ones the company had been using. A similar thing happened when Mos Otis looked for a local supplier of electric cables. By providing customized tooling of its requirements, Mos Otis teaches suppliers how to develop and improve the quality of their production.

“They are happy to oblige because in this way our contracts raise their competitiveness,” Avakyan said.

Otis Russia also heavily involves their clients in the installation of elevators on construction sites, which allows Mos Otis to be ahead of its competitors in terms of production costs and quality. Investing in better customer relationships helps Otis convince its clients to listen to the company’s proposals about advanced product development. The latest of these products is the Otis Neva lift, a next-generation elevator designed by engineers in the Otis St. Petersburg factory engineers that saves energy costs by using a gearless machine and regenerative drive.

Another important factor in the success of Otis Russia is the universality of its business policies. No matter where in Russia a contractor, service agent, operator or customer works and lives, he or she will receive the same standard of business treatment. Online feedback from regional branches helps the Moscow headquarters to constantly monitor all operations and evaluate their adherence to the company’s financial, managerial and ethical standards.

This commitment to high service standards is especially important in Russia where the majority of elevators are aging and need regular maintenance and repairs. In contrast to other countries, where aged elevators are few and servicing is a major generator of revenue, Otis Russia has to support service facilities and keep qualified personnel to maintain obsolete equipment.

Otis is the only international company that works closely with municipalities all over Russia to maintain local elevator networks.

Otis believes this investment will eventually pay off as construction is booming across Russia and the country’s further urbanization will require more and more modern elevation equipment.

Avakyan believes that his company’s most important achievement is the creation of a critical mass of committed and competent employees who share the goals, business practices and ethical principles of Otis in every Otis branch in Russia. Polls among Otis employees have shown that job satisfaction – rather than salary - is the thing that people appreciate the most about working at Otis.

Currently, Otis Russia exports about 20 percent of its products to the former Soviet republics and Eastern Europe. “But our major ambition is to become a global Otis hub specialized in manufacture of definite models of elevators,” Avakyan said.

The company’s factory in Scherbinka in the Moscow Region a already has the capability to make gearless machines for Otis branches around the world. If the idea is approved by Otis global management, its Russian subsidiary could export some 30 to 40 percent of the product.

Felix Goryunov is a Moscow-based economic journalist who has covered international economic and trade issues for over 30 years.