The Syrian crisis tests the UN 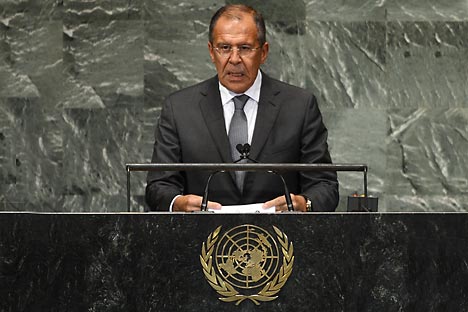 Russian Foreign Minister Sergei Lavrov: “Some of our partners have shown attempts to alter these agreements and revert to applying unilateral pressure, without consideration for the fact that well-armed groups of people are fighting each other in Syr

The UN is currently in session and discussions about the Syrian crisis are still stuck in the rut of a propaganda war. The real discussion is about how effective the international organization is and how well the UN is suited for the role of main international arbitrator between the biggest players in global politics.

Ministers of foreign affairs gathered in New York for a United Nations General Assembly, as combined diplomatic efforts to control the Syrian crisis headed toward a deadlock. Russia and China have thrice vetoed a resolution that would allow foreign military intervention in Syria. In addition, plans for a joint special envoy were never carried out, because the opposition in Syria failed to enter into political dialogue with Bashir Assad’s regime in the country.

The Geneva agreements also continue to have more bark than bite. In these agreements, the permanent members of the UN Security Council called for the creation of a provisional government in Syria, the establishment of multiparty elections, and a review of the Syrian constitution on the basis of a national dialogue.

On this subject, Russia’s Minister of Foreign Affairs Sergei Lavrov said: “Some of our partners have shown attempts to alter these agreements and revert to applying unilateral pressure, without consideration for the fact that well-armed groups of people are fighting each other in Syria.”

The meaning of the phrase “unilateral pressure” is clear from context of a speech given by U.S. Secretary of State Hillary Clinton. At the open meeting of the UN Security Council on Sept. 27, Secretary Clinton stated that the U.S. supports political changes that do not involved Assad. The leader’s resignation, departure or emigration is the key solution put forward by Europe and the Middle East in rhetorical attacks aimed at Damascus.

Assad is definitely not well-liked in Moscow or Beijing.

“We are not saying this is a man who will be able to lead the new Syria, and we are not looking for someone to replace him,” Lavrov told the General Assembly. “This is not about individuals. For us, it is more important that everyone living in the country – Sunnis, Shiites, Alawites, Druze, Christians, Kurds – has rights that are observed, including their right to security and economic, political and social rights. This is much more important than hunting down one single person”

Instead, Moscow proposes that foreign players put pressure on all Syrian sides, in a coordinated effort to persuade them to stop the violence and enter into a political dialogue. This is the position shared by other BRICS member states, as well. Yet, the opposition continues to receive moral support from the West, and the civil war in Syria rages on.

There are some calls that essentially suggest the UN be ignored. The Emir of Qatar, Sheikh Hamad bin Khalifa Al Thani, suggested that Arab countries think about military intervention in Syria. He noted that a precedent for this already exists: in 1976, following a decision taken by the Arab League, troops were mobilized in Lebanon to put an end to the civil war there. “This intervention was effective and good for the country,” said Hamad. When explaining why Arab countries should take the initiative to resolve problems in Syria, he expressed doubts as to whether the UN Security Council would manage to reach a unified decision on the issue.

“At a time when we are seeing more and more bloodshed, the Security Council is doing nothing. I call on them to try to find a way to reach an agreement that will put an end to the violence,” Secretary Clinton said.

British Prime Minister David Cameron subjected the actions of the Security Council to even harsher criticism. The main thing is not the fact that criticism is again being aimed at Moscow and Beijing. The main thing is that the U.S., the UK, France and the majority of Arab countries are not ready to act independently of the UN or to do anything without a mandate from this international organization.

The U.S. has already carried out a military operation on Syria’s eastern neighbor, Iraq. The operation was undertaken without the UN’s consent and without the consent of several of key members such France and Germany. The status of the self-proclaimed “Coalition of the Willing” has not given U.S. and British forces either international legitimacy or authority in the eyes of the Iraqi people. Their quick military victory resulted in political collapse in Iraq and a serious loss of face in the region.

Clearly anticipating challenges in New York on the day before his departure, Lavrov said in an interview: “to rephrase Churchill’s famous quote on democracy, I can say only that the UN is not perfect – but it is the best thing humankind has been able to come up with.”