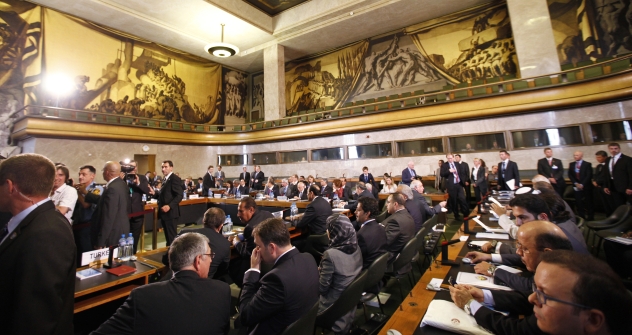 An international conference on ways to settle the situation in Syria was held in Geneva on June 29. Source: Reuters / Vostock Photo

The international community has agreed on a new plan for Syria, but how the Syrians will respond is an open question.

The foreign ministers of the UN Security Council member-states, the EU, Iraq, Qatar, Kuwait and Turkey have signed a new peace plan for Syria in Geneva. The document will be the final chance for Bashar al-Assad’s regime. If the peace plan fails, Syria may face foreign military intervention.

The new document, developed under the chairmanship of Kofi Annan, UN special envoy to Syria, is a revised version of the “Annan plan,” which was adopted last March. The Russian side developed major amendments to that document that were adopted in Geneva, which led the Western press to call the Geneva plan “a diplomatic victory for Russia.”

The main achievement of Moscow’s diplomacy is that while the document originally called for the Assad regime to stop fighting, the Geneva agreement requires all sides to cease fire simultaneously.

There will be facilitators tasked with persuading each party to participate. For example, the West supports the Syrian opposition abroad, therefore, it must entice them to negotiate. The Persian Gulf countries will be dealing with Syria’s internal armed opposition, while Russia and China will hold talks with Assad. Annan will coordinate this process.

The Geneva meeting also resolved that the Syrians themselves must decide whether they want to stick with Assad or choose a champion of democratic values. This condition is another result of Russia’s diplomatic efforts.

The specific measures to restore peace in Syria appear to be the following:

As soon as a ceasefire has been achieved, Syria should establish a transitional governing body that will enjoy the powers of the executive branch. The new body will be formed from members of the current government and representatives of all opposition parties and groups.

This body will pave the way for the “transition” itself. In this context, “transition” means an all-Syrian referendum or some other sort of plebiscite on revising the constitution and the legal system. “Free and fair multiparty elections” will follow.

Proof of how closely the world is following the Syria issue was the number of journalists gathered at the UN headquarters in Geneva. Hundreds of them roamed the builiding waiting for the results of the discussions. They had to wait a while; the talks proved very tough and finished 9 p.m. instead of 12:30 p.m., as originally planned. Guards armed with clubs did not let any media representatives approach the diplomats.

What remains to be seen is how to carry out in practice the plan that the diplomats have approved. The first point, requiring simultaneous ceasefire by all parties and withdrawal of governmental troops from the cities, raises the most doubts. Even if each facilitator puts pressure on their charge, there is no guarantee they will comply.

After the plan was signed, U.S. Secretary of State Hillary Clinton said: “No one has any illusions about the difficulties ahead.”

Numerous armed groups have formed in Syria in the last few months, each led by its own warlord, and not all of them are looking for peace. Furthermore, the Syrian opposition has no core, so there is essentially no one to negotiate with.