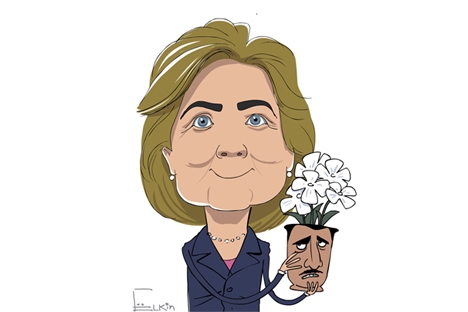 Russia and the U.S. refuse to let Syria be a major obstacle in their bilateral relations.

Syria’s fate is being discussed in the West but decided in the East. Even if the West and Russia agree on a common approach to Syria, this would not automatically stop the violence in the country. At the same time, it looks as if both the United States and Russia are increasingly wondering whether it is worthwhile sacrificing the progress achieved so far in their relations for the sake of Damascus. They feel more and more that it is not, especially with the world in the grip of an economic crisis that calls for joint efforts by all the major players. This is particularly the case since there is no reason for a geopolitical conflict: the details aside, in general the West and Russia see eye-to-eye on the main principles for a settlement in Syria.

Opinion: We can agree on Syria

Opinion: How long will the Kremlin support Syria?

The meeting between Russian Foreign Minister Sergei Lavrov and the U.S. Secretary of State Hillary Clinton in St. Petersburg on June 29 revealed that the differences between Moscow and Washington over Syria are not that great and that, given the political will, a rapprochement is possible. “I have felt a change in Hillary, no ultimata with regard to Damascus were presented,” Lavrov said. He noted that Secretary Clinton also agreed that the Syrians should be encouraged to hold a national dialogue and allowed to decide their future themselves. During their talks, Lavrov and Clinton came up with a rough road map for the conflicting parties.

The plan provides for simultaneous withdrawal by all regular Syrian army and opposition forces from cities under UN supervision and subsequent persuasion of the opposing parties to sit at the negotiating table to agree on forming a new government.

In the end, Lavrov and Clinton were so pleased with each other that the Russian minister, without exaggerating, described the meeting as one of their most productive.

Moscow chose not to turn the “Magnitsky bill” recently passed by the Senate Foreign Relations Committee, which bans some Russian officials from entering the U.S., into a pretext for a full-scale international conflict. That became obvious from the very first minutes of the Lavrov-Clinton talks.

During a press conference after the meeting, Lavrov mentioned the irritants between Moscow and Washington, from the problems of adoption of Russian children by American parents to the “Magnitsky bill,” yet he devoted most of the time to drawing journalists’ attention to the positive aspects of the relations with Washington. In addition to narrowing the differences over Syria, Lavrov and Clinton welcomed “enthusiastically” the words of the Russian and U.S. presidents, who approved the work of the Russian-American Commission. Moreover, an agreement was reached in St. Petersburg to create one more – the working group on military-technical cooperation between the two countries, an unprecedented move. In addition, Lavrov and Clinton reached some agreements in the economic sphere.

Russia and the West are ready to agree on Syria again as they agreed once before in supporting the initial plan of UN Special Envoy Kofi Annan. This does not mean, however, an end to the bloodshed, since Syria’s future is still to a large extent not in Western hands, but in those of the regional eastern powers. For all their importance for the peace process, the Geneva accords will remain a piece of paper for the radical Islamist militants fighting the Assad regime on the side of the opposition – or for Shiite Iran, which has not been invited to Geneva, although many experts admit that a civil war in Syria cannot be prevented without bringing Iran into the picture.

Furthermore, the agreements reached by Lavrov and Clinton in St. Petersburg, for all their political importance, are framework agreements that may lend themselves to different interpretations when it comes to implementation. After all, nobody had promised that the meeting between Secretary Clinton and Foreign Minister Lavrov would lead to an immediate settlement in Syria. But it has produced a tentative resolution of the differences between Moscow and Washington over the Syrian conflict.