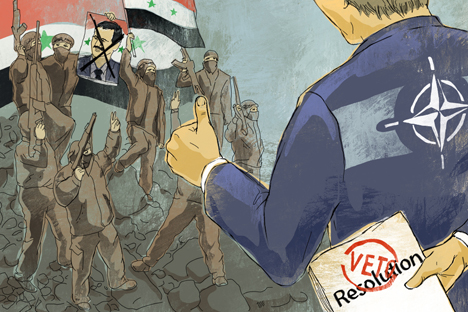 Despite all the threats, no one really wants to go to war in Syria.

A civil war is underway in Syria and, not surprisingly, the arrival of UN observers has made little difference. Will the Syrian conflict mean a major new war in the Middle East?

According to the West, the outbreak of war presumes the guilt of Bashar al-Assad’s troops and a similar presumption of innocence for the rebels. Turkey and the Persian Gulf monarchies, led by Saudi Arabia and Qatar, share this position. Moreover, they are openly supplying weapons to the rebels.

Norwegian General Robert Mood, head of the UN observer team in Syria, has admitted that external arms supplies have been a key reason behind the ongoing conflict. This statement will hardly change anything, except, perhaps, that the too-honest general might be replaced.

In the meantime, the U.S. has accused Russia of supplying weapons to Assad, even though, from the point of view of international law, Russia’s contacts with the official Syrian authorities are perfectly legal (as the UN has imposed no sanctions on Syria), while the behavior of the Gulf monarchies and Turkey, which are deliver weapons to non-government armed groups, is not. This does not seem to be anyone’s concern, though. Nor does the fact that Russia supplies air and coastal defense systems to Syria that cannot be used against rebels by any stretch of the imagination while the small arms and anti-tank weapons supplied by the monarchies and Turkey can be used against government forces.

The West will also hardly be discouraged by the fact that the militants fighting against Assad’s regime have been fully supported by al-Qaeda and that radical Islamists are playing the primary leadership role among the rebels.

It is ideology that determines the position of the Western allies rather than economics – there is almost no oil in Syria. As for the Arab monarchies, which might be the main “inspirers and enablers” of the Arab Spring in general, their motivation is clear – they have started building a new Caliphate, making use of the support from the West.

On the other hand, the economic character of Russia’s interests should also not be overstated. And, the Russian naval base in Tartus, where occasional Russian ships take on water and fuel once or twice a year, is also of little significance. Rather, Moscow does not want to lose its only military ally in the Arab world.

The entire world wonders when the West, Turkey and Arab monarchies will eventually start a direct military intervention in Syria. The fact that this intervention has not yet been triggered is a military-political anomaly. Hardly anyone seriously thinks that the intervention is being blocked by the Russian-Chinese UN Security Council veto. NATO did not need a UN mandate to invade Yugoslavia in 1999; nor did the U.S. to start its military operation in Iraq in 2003. Russia itself was somewhat indifferent about the UN’s authorization first to wallop Georgia and then to recognize the independence of Abkhazia and South Ossetia back in 2008.

Syria remains intact because of its military power. The Syrian Armed Forces are among the largest not only in the region, but also in the world in terms of the number of personnel and quantity of materiel (at least the Syrian Army and Air Force). More significantly, the Syrian Army has not followed the example of the Libyan one, which split as soon as the revolution started. There are deserters, but there has not been a single documented case of defection of an entire military command or even unit.

The combined combat potential of NATO and the armies of the Arab monarchies obviously exceeds that of the Syrian army many times; even so, both Europeans and Arabs are mortally afraid of incurring losses and intervention would certainly cause many. They will only fight if a very fast and essentially bloodless victory is guaranteed.

The armies of the six monarchies of the Persian Gulf have almost the same quantity of armaments as the Syrian army and they are far superior in quality. However, as the events of 1990-1991 showed (there is no other experience to fall back on), these armies perform poorly in combat qualities. The outcomes of their clashes with Iraqi troops, which are typologically similar to the current Syrian armed forces, were disastrous, although the monarchies could easily afford the most recent types of weapon then.

The U.S. has also lost interest in serious wars, especially six months prior to a presidential election.

This means Turkey has the most to lose from any potential war. Its armed forces are as battle-ready and powerful as those of Syria. The rest of NATO could assist Turkey with supplies of equipment and ammunition and, possibly, air and sea support, but nothing more, and there are doubts that Turkey will harvest real political benefits from a military operation.

Finally, a campaign to eliminate the Syrian regime would exhaust its adversaries, delaying a war against Iran for at least a few years. If Iran rushes into war to back its only Arab ally, the campaign will become absolutely unpredictable.

Military intervention in Syria thus seems quite unlikely. The current NATO administration would rather lose face than personnel and machines, while the Russian-Chinese veto is conveniently used as a pretext for “non-resistance to evil by violence” and finding “those guilty” of allowing this violence.

Alexander Khramchikhin is Deputy Director of the Institute for Political and Military Analysis.