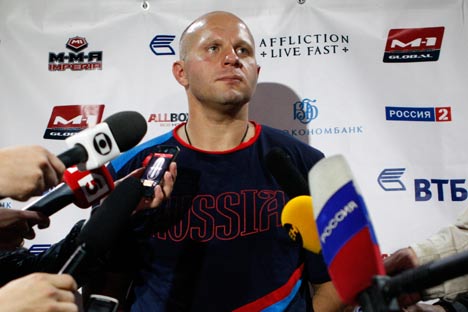 In August 2012, the MMA Union, headed by Fyodor Yemelyanenko, received a certificate of state registration that authorizes the organization to arrange MMA tournaments in Russia. Source: Vadim Zhernov / RIA Novosti.

Russia has become the first country in the world to recognize mixed martial arts (MMA) as an official sport. The MMA Union, headed by Fyodor Yemelyanenko, has been granted official status and the right to hold championship fights.

During a meeting of the Russian Ministry of Sport, an agreement was reached to include MMA on the National Sports Register. According to Vadim Finkelstein, vice president of the Russian MMA Union and president of M-1 Global, MMA will likely be supervised by Yuri Nagornykh. Deputy Sports Minister Nagornykh was part of the commission that gave MMA its official status.

“We collected all the requisite documents last year,” Finkelstein said. “We were expecting the commission to convene and decide on the MMA status, and it finally held a meeting. There were about 10 members on the board, and our union was elected out of three MMA organizations to run this sport. In principle, an agreement was reached and there are only some minor issues to address.

Fedor Emelianenko - the most dangerous man in Russia

Development of grassroots sports should take priority over money

In August 2012, the MMA Union, headed by Fyodor Yemelyanenko, received a certificate of state registration that authorizes the organization to arrange MMA tournaments in Russia.

“Now that we have official status, the state will offer us support, as it does all other sports associations,” said Finkelstein. “We are the first country in the world to recognize MMA as an official sport. I believe that many countries will follow suit. We have not only been recognized in Russia, but we have also become part of the international federation.” On Sept. 30, Moscow will host an international congress with participants representing 25-30 countries. On Nov. 14, St. Petersburg will play host to the MMA Open European Championships.

The declared objectives of the union are to develop, promote and organize MMA sporting events in Russia. Unlike professional fighters seen on TV, the tournaments arranged by the Russian MMA Union will require fighters to wear leg protection and gloves, as well as a helmet if desired.

Kamil Gadzhiyev, as general producer of Fight Nights and vice president of the Moscow MMA Federation, believes that state accreditation will take MMA to a whole new level.

“This is another big step forward in developing mixed martial arts in Russia,” Gadzhiyev said. “The accreditation of MMA as a sport will bring more people into our sport. All our efforts to promote this sport have been supported by the state. My area of responsibility is Moscow. We will do our best to develop the sport in the region. We will have additional incentives now. I think that, by promoting MMA in the region, we will encourage this sport on a national scale.”

Gadzhiyev also believes that youth MMA must be the next phase in MMA development.

“First, we need to finalize all of the affairs concerning adult MMA and then turn to youth MMA. As of today, most MMA fighters represent various combat schools – wrestling, boxing, sambo, judo, kickboxing, etc. This work has just started and it will bear fruit in about 10 years,” said Gadzhiyev.

“We are planning to build a Martial Arts Academy and start developing youth sports,” Finkelstein said. “We have a goal – to find talented fighters such as Fyodor Yemelyanenko to represent Russia adequately in the international arena. It is largely to his credit that we have gained international recognition.”