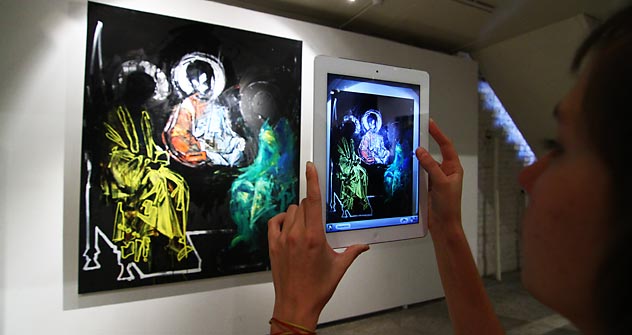 The "Spiritual Clash" exhibition presents “relevant icons” depicting saints wearing balaclavas, portraits of the Pussy Riot members with halos, and a representation of the Savior with a female face. Source: ITAR-TASS

Criminal probe is launched into whether an artist’s display of “relevant icons” incites religious hatred.

On Oct. 2, new tensions arose around the controversial art show "Spiritual Abuse" in the popular Moscow modern arts center Winzavod, as the Investigative Committee launched a pre-investigative probe into the works of artist Yevgeniya Maltseva. Maltseva’s exhibition of “relevant icons” was unveiled on Sept. 20: pieces included saints wearing balaclavas, portraits of the Pussy Riot band members with halos, and a representation of the Savior with a female face.

“The icon must be free from the historical ‘train’ that carries the remnants of the slave system, feudalism, despotism, chauvinism, obscurantism, ignorance and suppression of the personality. This is why the images of the members of the feminist band Pussy Riot were used as the starting point – as a symbol of the struggle for spiritual freedom and live religious affinity; as opposed to attempts to usurp it on the pretense of ‘traditional religions,’ ‘public morality,’ ‘spiritual foundations of the statehood’ and other sorts of sham,” the organizers wrote on the webpage dedicated to "Spiritual Abuse."

Church representatives were among the first to comment on the exhibition. Tikhon Shevkunov, the secretary of the Patriarch’s Council for Culture, dubbed the exhibition “an act of cynical terror against Russian culture.”

Archpriest Vsevolod Chaplin, the official spokesman for the Orthodox Church and Chairman of the Synodal Department for Cooperation between Church and Society, told RIA Novosti that he did not see the exhibits, but saw an image on the Internet.

“I believe that it vandalizes a sacred symbol revered by Christians, the icon of the Savior. As is known, a halo with a cross can only be depicted on His icon, while there is a female image on the picture – I did not see her face clearly. Some say it is the face of one of the members of the notorious punk band,” said the Archpriest.

“If it is indeed the image of a blasphemer combined with elements of an icon of Christ, then it is an anti-Christian image, and it should be investigated whether or not it insults the beliefs of worshippers – that is, whether it is an administrative offense,” Chaplin added.

The organizer of the exhibition, businessman and collector Viktor Bondarenko, believes that there was no point in the protests staged by Orthodox followers. He insists that the author did not use authentic icons for her artwork, did not aim to insult anyone’s religious feelings and demonstrated her art inside of a private, secular gallery.

“This is art, but we also intend to search for new religious imagery that modern people now require. The icons don’t have names, they are listed as Icon1, Icon2, and so on,” Bondarenko said. “We are not displaying our works in the Cathedral of Christ the Savior, but in a modern arts center. Those who don’t like it are welcome not to look.”

Sofya Trotsenko, the director and one of the founders of Winzavod, said in an interview with Gazeta.ru that the actions of the Orthodox activists represented a more violent form of extremism than the display itself.

“If we are talking about human rights, why aren’t these actions extremist and disturbing public order? They are more extremist than the exhibition itself. I’m not a specialist in religion, but it is obvious that the project is organized in an artistic space on closed, private premises, not in public areas such as the street. We should also remember that freedom of artistic expression is a fundamental human right.”

Maltseva and Bondarenko, were summoned to the Investigative Committee as part of a pre-investigative probe into a possible offense of “Fomentation of Religious Hatred.” The artist said in an interview with Izvestia that the questioning procedure was calm and the investigators were considerate.

“The investigator asked whether I planned to insult believers with my works and how I prepared for the exhibition. I explained that I had studied icons back when I went to school and university, but I needed some revisions,” Maltseva said.

Bondarenko was also asked whether there were plans to insult believers.

“I believe this is a really sad situation. If we lived in a rule-of-law state, it would be clear what sort of offense we had committed, what an artist can do or shouldn’t do. It is said that we have no censorship, that the artist enjoys freedom of expression. Yet, in reality, there is no officer, no officer’s honor, no independent investigator, no independent prosecutor. The way I see it – and some may accuse me of insulting someone – there are lackeys executing orders of the chief lackey. Because we never know what sort of order the chief lackey has given – to gut you, put you away, show you your place, fine you – we’ll have to wait and see."

“We won’t run. This is our country; we rely on the Constitution. Worshippers have crosses to repel Satan and I have the Constitution to fight these demons. I haven’t committed any crime. I am an Orthodox Christian. I am a member of the Public Chamber, a member of the board of trustees of the State Tretyakov Gallery and an honorary member of the Academy of Arts. I have organized many exhibitions and have the best collection of ancient Russian icons and a large collection of modern arts. So priests in cowls are not an authority to tell me what is art and what is not,” Bondarenko said.

On Oct. 3, representatives of the Investigative Committee visited the "Spiritual Abuse" exhibition to take pictures of Maltseva’s artwork and attach them to the case files. The Committee, which is the organization that institutes and investigates criminal cases in Russia, will decide whether Maltseva’s icons and paintings at Winzavod “foment religious hatred and discord” – a crime that carries a possible sentence of up to five years in prison.

This combined report is based on materials from RIA Novosti, Izvestia, and Gazeta.ru.