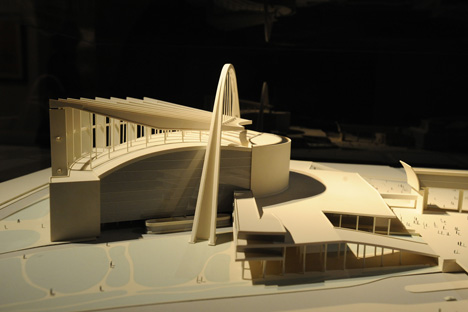 The Pushkin Museum celebrates the work of Le Corbusier, who more than once misgauged the Soviet appetite for experimentation.

The exhibition of French prominent architect Le Corbusier, held in The Pushkin Museum, brings together the different facets of his talent. Source: ITAR-TASS / Stanislav Krasilnikov

The largest Le Corbusier exhibition in a quarter of a century celebrates the modernist architect’s life and his connection with the city.

Given his affinity with Moscow, it is perhaps surprising that the city had never hosted a major examination of Le Corbusier’s work until now. However, the Pushkin Museum and the Le Corbusier Fund have redressed that discrepancy with the comprehensive exhibition “Secrets of Creation: Between Art and Architecture,” which runs until November 18.

Presenting over 400 exhibits, the exhibitioncharts Le Corbusier’s development from the young man eagerly sketching buildings on a trip around Europe, to his later years as a prolific and influential architect.

The exhibition brings together the different facets of his talent, showing his publications, artwork and furniture design alongside photographs, models and blueprints of his buildings.

Irina Antonova, director of the Pushkin Museum, said, “It was important for us to also exhibit his art. People know Le Corbusier the architect, but what is less well know is that he was also an artist. Seeing his art and architecture together gives us an insight into his mind and his thought-processes.”

What becomes obvious to visitors of the exhibition is that Le Corbusier was a man driven by a single-minded vision of how form and lines should interact, a vision he was able to express across multiple genres.

The upper wings of the Pushkin Museum are separated by the central stairs and two long balconies. The organizers have exploited this space, allowing comparison of Le Corbusier’s different art forms. On one side there are large paintings in the Purist style he adapted from Cubism, while on the other wall there are panoramic photographs of his famous buildings.

Le Corbusier wasa theorist, producing many pamphlets and manifestos which outlined his view that rigorous urban planning could make society more productive and raise the average standard of living.

It was his affinity with constructivism, and its accompanying visionof the way architecture could shape society, which drew him to visit the Soviet Union, where, as he saw it, there existed a “nation that is being organized in accordance with its new spirit.”

The exhibition’s curator Jean-Louis Cohen explains that Le Corbusier saw Moscow as “somewhere he could experiment.” Indeed, when the architect was commissioned to construct the famous Tsentrosoyuz Building, he responded by producing a plan for the entire city, based on his concept of geometric symmetry.

Falling foul of the political climate

He had misread the Soviet appetite for experimentation, and as Cohen relates in his book Le Corbusier, 1887-1965, drew stinging attacks from the likes of El Lissitsky, who called his design “a city on paper, extraneous to living nature, located in a desert through which not even a river must be allowed to pass (since a curve would contradict the style).”

Not to be deterred, Le Corbusier returned to Moscow in 1932 and entered the famous Palace of the Soviets competition, a skyscraper that was planned to be the tallest building in the world.

This time he fell foul of the changing political climate, as Stalin’s growing suspicion of the avant-garde led to the endorsement of neo-classical designs for the construction, which was ultimately never built due to the Second World War.

Situated opposite the proposed site for the Palace of the Soviets, the exhibition offers a tantalizing vision of what might have been, presenting scale models alongside Le Corbusier’s plans, and generating the feeling of an un-built masterpiece.

Despite Le Corbusier’s fluctuating fortunes in Soviet society, there was one architect who never wavered in his support. Constructivist luminary Alexander Vesnin declared that the Tsentrosoyuz building was the "the best building to arise in Moscow for over a century.”

The exhibition sheds light on their professional and personal relationship, showing sketches and letters they exchanged. In a radical break from the abstract nature of most of Le Corbusier’s art, this corner of the exhibition highlights the sometimes volatilearchitect’s softer side, as shown through nude sketches and classical still-life paintings he sent to Vesnin.

“He was a complex person” says Cohen. “It’s important to show his difficult elements; his connections with the USSR, with Mussolini. Now that relations between Russia and the West have improved, we can examine this. At the moment there is a new season in Le Corbusier interpretation.” To this end, the exhibition includes articles that have never previously been published in Russia, as well as Le Corbusier’s own literature.

Completing Le Corbusier’s triumphant return to Russia is a preview of a forthcoming statue, to be erected outside the Tsentrosoyuz building. Even if she couldn’t quite accept his vision of a planned city, Moscow is certainly welcoming him back.