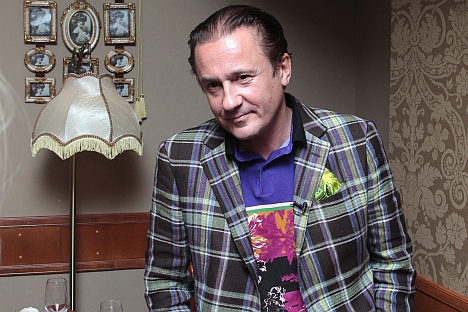 Oleg Menshikov, who starred in Oscar-winning "Burnt by the Sun," proposed to create the Chemodan restaurant in Moscow after his trip to Krasnoyarsk in eastern Siberia. Source: RIA Novosti

Dining out in Moscow is a lot swankier than before, but looking for an authentic Russian restaurant with great food, ambience and service can still feel like a trip across the taiga.

Chemodan (Suitcase), a restaurant literally transported from the wilds of Siberia, goes beyond the stereotypes and delivers something that you won’t find at Moscow’s showier Russian-style eateries, Cafe Pushkin and Turandot: a taste of the real 19th century frontier Russia, replete with generous portions of venison, boar and whitefish – not to mention bear cutlets, dumplings and old-style Siberian vodka.

Chemodan is a short walk from Moscow’s Christ the Savior Cathedral, where the Pussy Riot girls’ controversial “punk prayer” landed them a jail term (most probably in Siberia). But walking into the wooden-floored, quaintly furnished restaurant, you can take a culinary trip to Siberia without leaving Moscow.

The ‘gastronomic theater’ came into being through a trip to Krasnoyarsk in eastern Siberia by actor Oleg Menshikov, one of only a handful of Russian film stars who are also famous in the West. Menshikov, best known for his bravura performances in Nikita Mikhalkov’s Oscar-winning “Burnt by the Sun” and the U.S.-Russian hit “The Barber of Siberia,” found the original Chemodan there, and proposed to its owner to recreate it in Moscow.

In Russia, chemodan (derived from the ancient Tatar for ‘clothes store’) is an evocative word, associated with long journeys – both wished-for and involuntary. Even today, “sitting on your suitcase” is a favorite Russian saying, bringing to mind both the wait for Jewish emigration in the 1970s and the more sinister night-time knock on the door from Stalin’s secret police in the 1930s purges. It can also signify a “suitcase mood,” of wishing oneself far, far away.

A meal in Chemodan starts with Russian staples such as cabbage soup (“shchi”) with mushrooms and Olivier salad, but Siberian game, sourced directly from Siberian huntsmen, is the star attraction. From rabbit pate and venison carpaccio, graduate to Siberian whitefish and the ubiquitous venison (also delicious in Siberian “pelmeni” or dumplings), while the more adventurous can try the gamey boar with mushroom cream sauce and bear cutlets.

The best accompaniment to the wild things that could be stuffed on your wall is the clean-tasting “yerofeich,” a traditional Russian vodka with cumin, aniseed and other herbs and spices. It comes in several fruity varieties, and is the genuine way to recreate the Siberian merchant experience. Desserts, too, come in a pure Siberian form: varieties of jams and specialty teas, such as the “Siberian honeysuckle.”

Chemodan’s service, like the nostalgic black-and-white photos on the wall, and the attentive, plain-dressed staff, speaks to a serious, understated attitude to fine dining. The menu comes in Russian and English, and prices are in the upper medium range for Moscow, with starters, mains and vodka coming to $75-$100 per head.