Pussy Riot: From band to brand 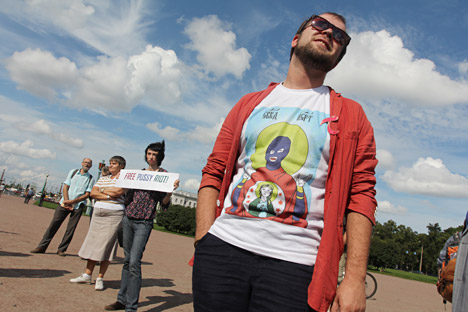 The Pussy Riot members have given their consent to register their trademark. Source: ITAR-TASS

Pussy Riot lawyers have declared war on condoms and T-shirts bearing the name of the band. They intend to register Pussy Riot as a trademark, to safeguard the young women against illegal commercial use of the brand they created.

Pussy Riot’s lawyer Mark Feigin has taken steps to prevent the sale of alcohol, cosmetics and other products with the name of the band on them.

Izvestia has learned that Web-Bio, a company connected with the lawyer, has filed an application for the registration of “Pussy Riot” as a trademark under 17 classes of the International Classification of Goods and Services. The list includes alcohol and alcohol-free beverages, tobacco goods, cosmetics, headgear, stationery, audio recorders and other classes of products.

Neither Feigin nor Web-Bio has plans to use the name of the band for commercial purposes. The only stated reason for registering the trademark is to prevent the Pussy Riot brand from being used by third parties – which has been happening more frequently lately.

“Some pornographic materials featuring people wearing balaclavas have appeared on the Internet. Previously, an application was filed in Germany to produce alcohol to be sold under the Pussy Riot brand. In the UK, a certain Dmitry Som has applied for the registration of Pussy Riot condoms,” Feigin said in an interview with Izvestia.

Web-Bio has not yet received any proposals to make products using the Pussy Riot brand. Even so, the lawyer claims that the number of those willing to sponge off of the brand is growing. The leading segment is the production of T-shirts bearing the band’s logo. “Pussy Riot band members have not received a cent from the sales of these shirts,” Feigin said.

Web-Bio previously applied to register the trademark under 41 classes of International Classification, including leisure services and culture and outreach activities. The registration purpose was the same – to protect the brand from misuse.

Feigin has stated that Pussy Riot members have given their consent to register their trademark. It is not known how the girls are connected with Web-Bio. In April 2012, Pussy Riot lawyer Nikolay Polozov only said that the company was connected to representatives of the band.

“The decision to patent the brand was made in order to protect the arrested band members and those who were not arrested from the harmful consequences of plagiarism,” Polozov said then.

Feigin says that Web-Bio was founded back in 2003; Natalia Kharitonova has been its only director. Although Web-Bio is declared as a film company, it has not produced a single film to date, and no one knows anything about its activities.Feigin claims that there are no ulterior motives: the company was created as a framework, and it was selected quickly and by chance, as a company with a clean reputation. “We simply took the first incorporation documents we saw and made use of them,” Feigin said.

According to the music production center SEVER Production, which promotes some of Russia’s popular artists, the Pussy Riot brand is worth at least $1 million. However, it could be worth tens of millions if the right promoter were engaged.

First published in Russian in the Izvetia newspaper.