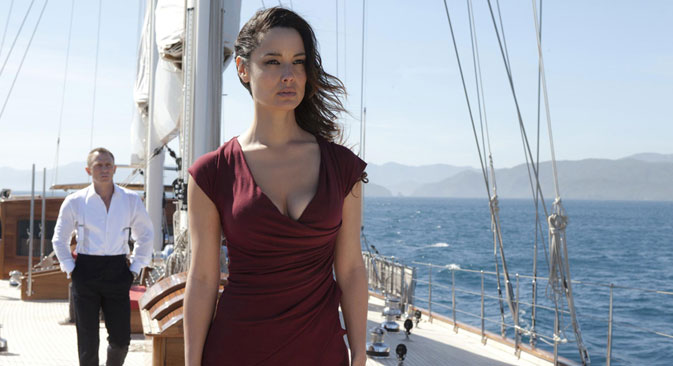 Older 007 fans had some catching up to do: they faced jail for watching the films as the debonair spy was branded ‘anti-Soviet’ by the authorities. Source: Press Photo.

Russia's prominent film critic shares his opinion about the new James Bond movie that is currently on in Russia's cinemas.

British director Sam Mendes has got every detail of the latest Bond movie just right – even the Bond girls appear in the precisely-prescribed doses.

I don’t want to give anything away, but Skyfall is, in my opinion, the finest Bond film yet. After 50 action-packed years, the franchise still knows how to pack a punch.

In reality, half a century of Bond films has actually been condensed into just two decades for Russian movie-goers, as if we have been watching the entire series  on fast forward, given that Bond was banned in the USSR. From Russia with Love was considered “anti-Soviet” and Bond himself was tainted in the eyes of the Communist authorities. 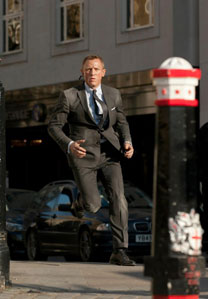 The British spy we all loved. Source: Press Photo

Maya Turovskaya, one of the USSR’s leading film critics, wrote a book in the Seventies called A Hero of our Hero-less Time, in which she tried to rehabilitate 007 and explain the Bond genre to the Soviet audience. The book was published, but was branded “evil” by the state.

At the time, I was working for a major Moscow film magazine. The editor asked me to write a review slamming the book; a diatribe filled with the most anti-Bond rhetoric imaginable, just as the party’s official position required. But I quite liked the book and told the editor as much. He gave me a weary look, but dropped the request. The review went unwritten, and thankfully I didn’t feel any repercussions; both Bond and I survived to die another day.

In the perestroika era, pirate Bond videos began circulating among Soviet film fans. The police routinely raided owners of VCRs, cutting off power to their flats so the cassette got stuck in the player, and Bond fans were caught red-handed. Many went to jail for their crime, which was deemed to be “the propagation of pornography” – the films were seen as being on a par with Last Tango in Paris.

Yet so widespread was the interest in Bond that an official Soviet spy serial called Seventeen Moments in Spring was released, in which the Bond character was a Soviet secret agent in Nazi Germany called Stierlitz, while the enemies of the world were charming chaps from the Gestapo. The series was hugely popular and the streets would empty when the show was on; people were glued to their TV sets.

As soon as the USSR imploded, the Bond movies that had already been released flooded into Russia and were shown at “video clubs” – tiny commercial venues that held screenings of pirated video cassettes. Bond entered the hearts and minds of moviegoers in mammoth-sized doses, with Sean Connery magically metamorphosing into George Lazenby, who then reappeared as Roger Moore.

The chronology of the franchise wasn’t immediately obvious to most fans, and the arrival of Daniel Craig’s atypical Bond wasn't  greeted as dramatically as it had been in the rest of the world.

Daniel Craig has introduced us to a new kind of Bond, one without hairgloss, who not only thinks for himself, but has doubts and has to make choices. He has become a fully-fledged hero.

A Russian guide to scary movies for Halloween

Following the disastrous performance of Quantum of Solace at the box office, the producers took a desperate step and handed the franchise to Sam Mendes, a man who has a background in theatre and who is far more disposed to making art-house movies than psychological dramas. But Mendes has managed to breathe life back into the ailing franchise, while managing not to lose any of the charm that makes Bond, well… Bond.

We are unceremoniously cast into the thick of the plot, complete with its chases and everything you have come to expect from a Bond film, all of which is shot with a fearless neophyte energy. The already familiar ingredients are there – the conflict between HQ and the MI6 network; the heartless M, controller of a network of tin-soldier yes-men who march off loyally to certain death on the merest flutter of her eyebrows.

The film ascends to previously unseen heights. It has something to offer for those who want emotional drama as well as those who are happy with the deafening roar of a motorbike over the roofs of the Grand Bazaar in Istanbul and a deadly race through the tunnels of the London Underground.

To beat or not to beat?

This is the tendency for deep contemplation from a firm grounding in the conventions of drama, and the ability to cast top actors to work within them. For all the abundance of amazing tricks and Hollywood rhythm, the real suspense comes out of the human dilemma, rather than the physical action. Every character at every point in the film is confronted with decisions – not only tactical decisions, but also moral decisions.

If previous Bonds struck first and asked questions later, today’s incarnation is faced with Hamlet’s dilemma – to beat or not to beat? And if you do beat, then who do you beat? And why? His adversary in the film has taken the opposite stance and formed a high-voltage force field around himself.

It looks strongly as though Mendes has followed the theatrical habit of trying on the skins of all the characters himself, enabling him to hack off anything which is empty, ill-fitting or fake. But he has mastered the genre superbly and never overloads his cart; he builds the tension to breaking-point with grace and ease. It’s like a game of give and take, a game of skill whose rules are governed by mathematical logic. This is a pro at work!

There is no need to talk extensively about the cast. Daniel Craig – who has never been so charming or persuasive – is joined by Javier Bardem in the role of Silva, Bond’s nemesis, Ralph Fiennes as a hard-headed MI6 controller, and Albert Finney as an imperturbable Scottish keeper of an abandoned castle.

The astounding Judi Dench, who is often overshadowed by the Bond Girls, is turned into one of the film’s central characters; the entire plot revolves around her character. She is an ambivalent heroine. M does her duty, as if for the common good, but she is also the main source of evil at the same time.

No Bond film could be complete without the Bond Girls, but their role is more aesthetic – they are here to provide eye candy, make promises and die. They look dazzling and are morally ambiguous. And they appear in the precisely-prescribed doses.

Valery Kichin is the senior film critic at Rossiyskaya Gazeta.