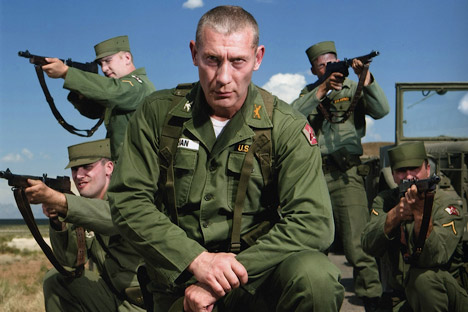 Igor Zhizhikin, a Russian actor who lived for 23 years in the United States and had a solid Hollywood career. Source: Press Photo

American films continue to propagate old stereotypes about Russia, but this may not be a bad thing.

The way a Hollywood film depicts Russia can turn a thriller into a comedy for the Russian viewer. Mangled Russian words, exaggerated and absurd Russian reality and people, as well as unverified or unreliable data certainly do not make American movies credible in the eyes of the Russian audience. Yet Russia has recently become an important market for Hollywood products, and top-rated celebrities such as Tom Cruise, Will Smith and Megan Fox often come to Russia to promote their films.

The Russian language is naturally the main challenge for Hollywood studios. There are whole collections of such bloopers on Russian-language websites. A typical example is The Bourne Identity, in which the main character’s name Foma Kiniaev is spelt in his documents as “Fshf Lshtshfum” – the author of the name simply changed the keyboard layout hoping that the same keys were used for the Cyrillic letters. Tom Hanks’s character in The Terminal had a driving license issued to Gulnara Gulina, a name that would fit a Muslim female from Tatarstan rather than an Eastern European male.

It seems that despite the huge budgets for the Hollywood features, they simply do not pay enough attention to editing texts and words. “Hollywood makes pictures for itself. They don’t care that we all have accents there. So why are we hurt? They didn’t shoot the movie for us. They didn’t check the facts? That is no crime. Fact-checking never runs deep. They never pay too much attention to it,” said Igor Zhizhikin, a Russian actor who lived for 23 years in the United States and had a solid Hollywood career. When Stephen Spielberg was shooting Indiana Jones and the Kingdom of the Crystal Skull, Zhizhikin had to argue with the director about the too-obvious accents of the Russian characters. The actor believes that those responsible for making films never consider these faults to be worthy of any attention and make mistakes unintentionally.

Russian film producer Viktor Alisov attributes these distortions of the Russian language in Hollywood films to mere incompetence. “It seems that they economize on advisors. It is pointless to spend so much time and resources on checking the facts. The audience will be happy with what you have. The main thing is for the actors to perform well and for the movie to have special effects,” Alisov said.

Erik Sarkisian, a supervisor of the cinema archive at the Moscow Province Ministry of Culture, however, disagrees with the idea that this is just incompetence. He believes depicting stereotypical Russians in major films is a political statement. “How can Hollywood be so blind when it portrays a Russian cosmonaut in Armageddon as a drunkard wearing a fur cap? They should have added a bear and a nesting doll!” Sarkisian thinks this kind of irony and mockery help Hollywood prove its significance and dominance on the film market, enabling it to set its own terms and rules of the game.

Alisov, on the other hand, does not think that Hollywood directors should be blamed for distorting the image of Russians – that the real responsibility lies with another form of media. “The portrayal of this country in Hollywood films is a result of the impact the American media on the American mindset,” Alisov said. “The films manifest what the American public really thinks about Russia. Hollywood is an unconscious victim of the media. They make pictures about what they believe to be true and what people really want to see. This is the truth of the way they see it.”

While there are ongoing debates about the continued use of Russians, communists and Russian Mafiosi as the number one enemy in Hollywood films, Zhizhikin argues that Russian villains in blockbusters actually benefit the country because they continue to promote the image of Russia as a superpower. “It acts as a counterweight, an archenemy. This makes it more exciting; it is a good tactical move. Russia is described as a worthy opponent, and rightly so – it is a vast country,” Zhizhikin said.

Alisov agrees, to a point. “There is still a stereotype that Russia stands for KGB and mafia. I suppose that media wars continue through films,” Alisov said.

Sarkisian notes that Russian cinema also distorts the image of Americans in films and TV shows. Take The Interns, a popular new comedy series featuring Phil, a naïve, fair and kind-hearted American whose parents are gay. Phil is mocked and attacked in every episode and is often referred to as a Yank. “That’s a set of stereotypes, albeit quite mild and gentle. However, this series may just be the first one in a sweeping trend,” Sarkisian said, giving an example.

A few years ago, Russia! magazine gave Viggo Mortensen, the star of Eastern Promises, an award for the best depiction of a Russian character in a Hollywood film. The magazine believed that Mortensen made his character, the converted cleaner Nikolai, touching and authentic. Yet such verisimilar images of Russians in foreign films are rare, so when Russian viewers come across a film with a profound, sophisticated and credible image of a Russian character, they are sincerely pleased and are ready to watch it over and over again.

{***The images of Russians in American movies***}

The images of Russians in American movies

Red Heat is set in Soviet Moscow. The title alludes to the red Communist menace. The movie became famous in Russia for its parody portrayals of regular Soviet policemen. A bus chase and Russian sauna are depicted as typical routines for Russian law enforcement. Danko’s partner is played by Russian actor Yury Ogarkov. The Terminator walking in Red Square in a Soviet police officer’s uniform still produces a comedic effect and is widely used in Internet memes.

In Armageddon, the American astronauts were warned that Russian cosmonaut Andropov had spent 18 months at the space station all alone. When the Americans arrive, he has black-and-white pictures of his family hanging on the walls and he welcomes the Americans wearing a hat with ear-flaps and a T-shirt with a five-point star and the word “USSR” on it, while, naturally, drunk. The Americans are shocked.

Ukrainian astronaut Leonid Kadenuyk, who watched the movie being filmed, commented on the depiction: “They showed a Russian orbital station, a colonel wearing an astrakhan hat – I didn’t like this. The fact is that the Americans respect their Russian colleagues.”

In the 1990s, foreigners still believed that Russians were Communists who had to put up with the new democratic order. Russians tended to stock up on leather jackets, expensive cars, and, in the case of Boris “The Blade,” weapons. Intrigues, setups and racketeering represent the norm for Boris, a former KGB agent.

A Russian prostitute (according to screenwriters, there really is no other job for a woman in Russia) witnesses an assassination attempt on the president. She ends up as the girlfriend of the cold-blooded assassin codenamed Hitman. Kurylenko has a solid track record of playing the girlfriend of the lead male character – she performed this role with ease in Quantum of Solace and Max Payne.

RED is not only Retired and Extremely Dangerous, as is true of Bruce Willis’ character, a former special agent––RED is also a name for Russian spies. The former KGB agent, who is meltingly loyal to his lover, an FBI sniper, spends his time in dark vaults wearing a fur coat and ear-flap hat with a bottle of vodka on the table. It looks like sheer parody. His weekend retreat, which turns into a safe house for former agents, features a samovar on the table and a bear skin on the wall. This set of stereotypes enhances the comedic effect for the Russian audience.

The Russian circus tiger Vitaly is a rude bumpkin. His fur, burned after an unlucky jump through a ring of fire, never gets silky again, and the tiger gets depressed. Like any bitter Russian, he drowns his longing for his lost fame in borscht soup, rather than vodka (it’s a kids’ movie) He seeks solitude and does not trust the light-hearted American lion, Alex, who is willing to break with centuries-old traditions. Alex manages to lift Vitaly out of his depression by giving him fur conditioner.