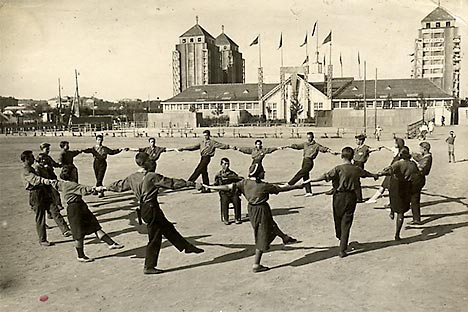 The exhibition will give people an idea of how the landscape of Gorky Park changed and evolved over the first half of the 20th century, when it was the venue for all kinds of different exhibitions. Source: Press Photo.

The Garage Center for Contemporary Culture opened a new temporary pavilion designed by Japanese architect Shigeru Ban. Very fittingly, the space houses an exhibition titled “Temporary Structures of Gorky Park: from Melnikov to Ban.” It will run through December 9, 2012

The pavilion’s main structure is made of steel, but the metal core is surrounded by paper pillars that are 11 inches in diameter and 21 feet high. These have been placed to ensure that sunlight floods through the building – inside there is a feeling of space and light, just as if you were standing in the open air.

The paper pillars are filled with insulation, and, when transparent plastic sheets are hung between them, the pavilion can be kept warm when the weather is cold. Thus, the Garage Center will also be able to welcome visitors over the winter months.

“In a week’s time we’ll be working at full speed.  We’re opening a cafe and a bookshop, and, just like in old times, visitors to Gorky Park will feel themselves right at the center of contemporary culture,” Garage’s director, Anton Belov, said at a press conference.

In essence, this is a temporary pavilion, but only in the symbolic sense. In actual fact, it is not. In terms of its construction, the pavilion exceeds all the old standards for public buildings and can be expected to last at least as long as any other house that is currently being built in Moscow.

It will be about 30 years before it needs any kind of serious refurbishment. Various features – the cardboard pillars, gaps in the paintwork on the plasterboard, the unfinished roof construction and a ceiling made of corrugated cardboard – all combine to give an overall effect of impermanence.

The architects’ original decisions have also contributed to this look.  The design of the oval building – the columns are spaced first evenly and regularly, and then suddenly crammed together – deliberately goes against the idea of architectural rhythm. This automatically leads some people to assume (or hope) the building will not be there for long.

“It creates a strong sense of artistic impermanence, that concept so highly valued in Japanese art,” wrote Grigory Revzin in Kommersant.

The program of the new Garage Center begins with an exhibition aptly titled “Temporary Structures of Gorky Park:  from Melnikov to Ban.”

The exhibition gives people an idea of how the landscape of Gorky Park changed and evolved over the first half of the 20th century, when it was the venue for all kinds of different exhibitions.

The buildings in those exhibitions were designed and constructed by the Soviet Union’s top architects: Schusev, Zholtovsky, Schechtel, Melnikov and others. Part of the exhibition will be dedicated to modern constructions, and an array of models, sketches, and frames from historical film footage will bring the park’s visual history to life.

The exhibition also makes use of modern technology to enhance visitors’ experiences.

In the center of the pavilion will be a plan for the park that was developed for the First All-Russian Agricultural and Handicraft Exhibition in 1923.

This was when, for instance, the Mechanization Pavilion – a building that is now known as the Hexagon – appeared here. By the end of 2013, this very place is where Garage will open one of its permanent exhibitions.

Visitors with tablet computers will be able to zoom in on the plan and see it in 3-D. Tablet owners will also be able to find out the history of various structures in more detail.

For any visitor in possession of a device that recognizes QR Codes, 3-D models of temporary structures of the past can be made to show up on their screens.  They can then send this image in an email or upload it on social networks.

The Garage Center for Contemporary Culture moved to Gorky Park from a former bus garage in the north of Moscow.

As well as the temporary pavilion designed by Shigeru Ban, there will also be two permanent pavilions; the old changing rooms for the ice-rink have also been given over to the Garage project.  No need to feel too sorry for the ice-skaters: they already had a posh new changing room built for them last year.