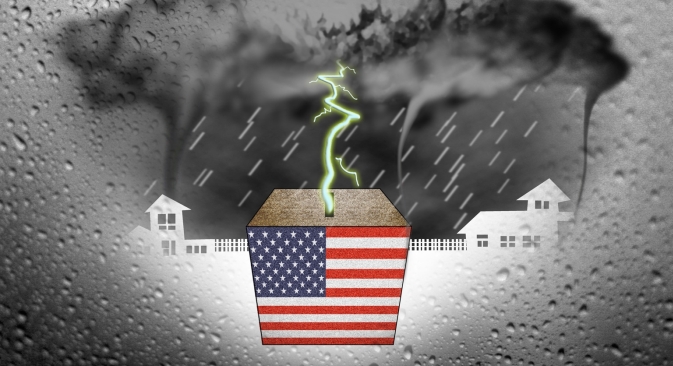 Topical hurricane Sandy has coincided with the home stretch of the presidential race in the USA. But this is of little surprise.

Such natural disasters will only become more and more frequent, not only in America, but throughout the world. There is simply no avoiding them – these are no longer natural anomalies, but normal weather that we have to get used to.

Aeroflot cancels flights from Moscow to New York due to hurricane

Hurricane Sandy, which has managed to interrupt even the U.S. presidential campaign, is proof of what some have long suspected: there is something is wrong with the Earth. Climatic cataclysms – each one worse than the last – are breaking out with growing frequency.

The scale and frequency of natural disasters seem amplified by the unprecedented progress of mass communications. In other words, Sandy-type tropical hurricanes and floods (such as the one that hit the city of Krymsk in Russia last summer) have always been there, but had never been as widely or promptly reported throughout the world as they are now. Reports had also never before reached the large number of people they do now.

It is only with the advent of the internet that the scale of these disasters and the number of their victims has become impossible to conceal.

“There is a grain of truth in this, but this is not the whole picture. You see, countries keep records of dangerous phenomena, and these records reveal a clear upward trend in recent years, regardless of whether or not they are reported in the media,” said Dmitry Kiktev, deputy director of science at Russia’s Hydrometeorological Center.

Scientists struggle to keep up

Computer models of the Earth’s atmosphere could go some way toward explaining what is happening. By sequentially changing the parameters of such a model, physicists may be able determine the causes of weather phenomena and explain the recent changes.

The problem, however, is that such models are fairly complicated and a great number of variables needs to be taken into account in the process. Building these models takes decades rather than years, thus making it next to impossible to keep up with the actual changes in the atmosphere.

Several years ago, Hydrometerological Center Director Roman Vilfand made a rather grim joke: “The leading weather services of the world spent 30 years building a world climate model. But by the time they finished, the climate had changed.”

His deputy for research, Dmitry Kiktev, says that statistical models do indeed require many years of observations. This is why atmospheric physicists often fall back on hydrodynamic models that can register changes swiftly. Still, such models cannot answer the question about the main cause behind the changes that are taking place.

Global warming is a suspect

Whatever anyone thinks about global warming, it would be folly to dismiss it as a meaningless hypothesis. The Earth’s temperature has been measured independently, at various times of day, by thousands of people around the world, for more than 160 years. These measurements have been recorded and published.

The Earth has grown warmer by about 33.1 degrees Fahrenheit over the last century and a half. But the warming has not been even: near the poles, the average annual temperature has gone up by around 35.6 degrees Fahrenheit, while it has stayed almost the same close to the equator. The temperature gaps between the poles and the equator have also diminished. As a result, winds in the upper atmosphere have weakened and the atmospheric circulation has changed.

“There have been more frequent ultrapolar invasions from high latitudes and similar invasions of warm air masses from the south,” Kiktev said.

All this does little to explain the goings-on in the world weather kitchen. But, so far, there is no alternative.

The fact that there is still no explanation makes little difference; weather activity that meteorologists consider to be dangerous atmospheric phenomena has become more frequent. This is a registered fact with which we have to learn to live.

Predictably, an explanation – if and when one is found – will not change anything. Even if global warming is named the main culprit, the most the international community can do is stabilize the temperature at its present level; and this would take a superhuman effort. In any case, things cannot be turned around to where they were a century and a half ago.

It makes more sense to accept the fact that everything on this Earth changes – the weather is no exception. Humans must simply try and adjust to these changes. Russians will have an easier job than Americans.

Recent “fall hurricanes” (to use the jargon of U.S. weather specialists) such as Sandy always occur during American presidential election campaigns. If they increase in frequency and force, then, sooner or later, some incumbent president will be forced to postpone elections until a different time of the year.

Why risk losing votes because of the weather and its unpredictable nature? Russia has no such problem. The increasingly frequent floods in the Southern Federal District and the scorching heat that causes massive forest and peat bog fires have, so far, “luckily” taken place in between spring presidential elections and fall local elections.

Sergei Petukhov is a columnist for RIA Novosti. The opinion, here abridged, was first published in Russian in RIA Novosti.