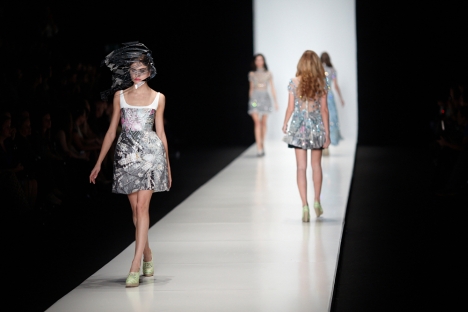 The week opened with a show from the Russian fashion house of Slava Zaitsev, named after designer Vyacheslav Zaitsev, who has been well known in Paris since the Soviet era. His original style, which draws deeply on tradition and is rooted in Russian national costume, is easily recognizable in any city or country. It was an eye-catching opening show for Moscow Fashion Week.

His collection traditionally emphasizes the idea that every culture has its own history of national costume, which, if skillfully adapted by designers, helps create unique apparel from the mix of traditions with universal, seasonal trends.

Another highlight of the Mercedes-Benz Fashion Week in Russia was the British brand BasharatyanV. The brand was founded by Veronica Basharatyan, who moved to Great Britain at the age of 20. After studying fashion at top British schools, Veronica recently launched her own clothing brand.

The collection she brought to Moscow Fashion Week (Basharatyan Spring/Summer 2013) featured unobtrusive interpretations of Armenian ornaments and even some details of the national costume: streaming false sleeves, belts resembling the traditional patterns of the world-famous Armenian metal stamping, and faux-fur summer coats.

Lilia Poustovit, a very talented, up-and-coming designer from Ukraine, presented her Poustovit collection on the catwalk, with her other brands on display in a Milan showroom and in some of the best fashion boutiques around the world, including the Le Form in Moscow and Dome Market in London. This time, her collection was imbued with curious optic ornaments, based on patterns from toy kaleidoscopes and Buddhist and Hindu mandalas.

Rich coral, dusty blue and navy were the main colors used in both the prints and the plain details of floor-length dresses, tunics and knee-length skater dresses. The collection’s indisputable hits were small caramel coral bags on a long shoulder strap.

The U.S. brand of Armenian origin, Von Vonni, featured genuinely feminine styles. The collection is sold in one of Russia’s few department stores, TsUM. Ruched-waist dresses ending just above the knee and fabrics in small soft pastel patterns made the static presentation of a few designs fit in very well with Mercedes-Benz Fashion Week Russia. 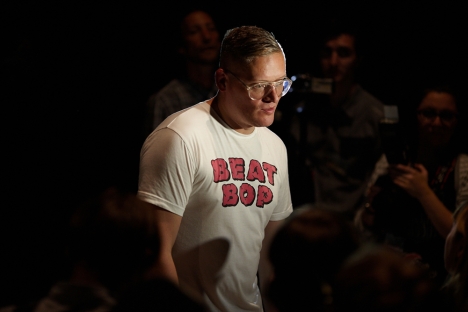 Ozwald Boateng’s was possibly the most anticipated fashion show at Merecedes-Benz Fashion Week Russia. Born in Ghana, designer Ozwald Boateng is one of the world’s best-dressed men. After years of working for Givenchy Homme as creative director, he now runs a boutique in an upscale district of London.

Fashion behind the Iron Curtain

Boateng sold his first collection when he was just 16 and, a few years later, he was awarded a special medal by Queen Elizabeth II for his special contribution to the fashion industry. His suits can now be seen on Hollywood stars at the Oscars; Boateng’s clients include such international stars as Will Smith, Russell Crowe, Samuel L. Jackson, and Daniel Day-Lewis.

Outside of well-tailored men’s suits, Boateng actually designed costumes for Neo and Morpheus in The Matrix Reloaded. At this month’s Fashion Week in Moscow, apart from the collection of men’s apparel for the new season, Ozwald Boateng also presented, for the first time, his debut capsule collection for women.

The Ozwald Boateng Spring/Summer 2013 collection is a strange mix of slim-fitting jackets with sharp outlines and wide, loose-fitting trousers. The Ghanaian designer’s show in Moscow’s Manezh opened with black and dark-blue jacket suits, gradually replaced by grey and beige examples.

The show finished on a more relaxed note, with jackets featuring bright blue-and-green prints paired with shorts. In addition to the classic suit, Boateng advises men to complete their look with hats – most of them reserved and low key, but some in original bright colors and with wide brims.

In the new Giles Spring/Summer 2013 Collection, the unquestionable genius of British fashion designer Giles Deacon demonstrated a selection of dresses of varying length and style. Little black dresses intermingled with bright and almost eccentric gowns that were studded with Swarovski crystals. The show ended with graphic dresses and futuristic headgear in metallic fabrics. The collection, which includes dresses for all occasions, was much admired by Moscow’s fashionistas. 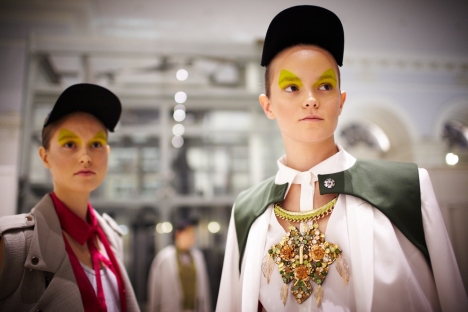 Oleg Biryukov and Svetlana Tegin once again headlined at the Mercedes-Benz Fashion Week. The famous Biryukov minimalist dresses, maxi skirts and comfortable three-quarter sleeve coats are available in Moscow and St. Petersburg, at Bosco di Ciliedgi and Le Form. The new Biryukov Spring/Summer 2013 Collection is surprisingly colorful: basic dark blue, coral, white and black became the main colors for the brand’s new collection, while floor-length dresses with stripes in these colors were its signature look.

Svetlana Tegin is a recognized master when it comes to jersey. Tegin purchases the unique cashmere and angora for her collections in Mongolia, where wonderful cardigans, wraps and many other items for her winter collections were also made. Inspired by the Victorian style, with its wraps, capes, cardigans and long dresses in gloomy steel grey, dark grey and black, the new Tegin Spring/Summer 2013 collection also features long pleated skirts and “royal” high-collar jackets in coffee tones.

Mercedes-Benz Fashion Week Russia closed with a show of men’s prêt-a-porter from the popular Italian brand Pal Zileri. Offering high combinability of its apparel, as is expected of a commercially successful global brand, the collection’s message could be interpreted as “wear-and-go.” From the brand’s boutiques or corners in Russia, this is precisely what the fans of this famous ready-to-wear brand do.