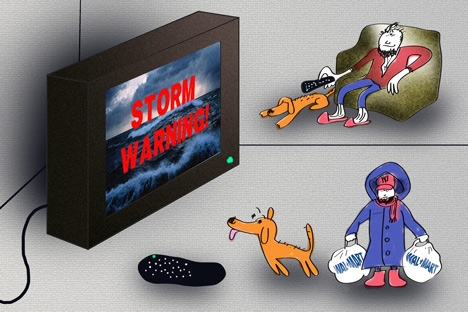 Hurricane Sandy hit the East Coast of the U.S. this week bringing about havoc and flooding in communities. Source: AP

A state of emergency like Hurricane Sandy reveals a striking difference between Americans and Russians when it comes to preparedness. 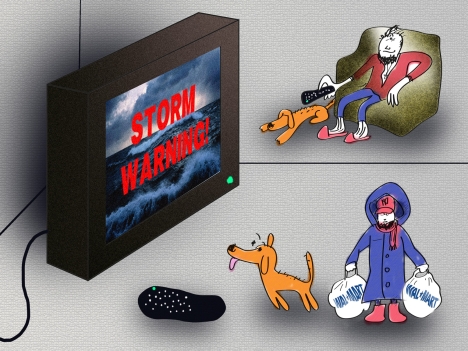 Hurricane Sandy wreaked havoc this week, causing power outages and flooding in communities up and down the East Coast. Beachfront towns are still reeling from the devastation, and villages from Rhode Island to New Jersey moved Halloween to next Saturday. Yet for foreigners living in the United States, the crisis also vividly demonstrates how Americans prepare themselves to meet the challenges of Mother Nature.

For an expat from Russia like myself, it is striking how serious ordinary Americans become when it comes to dealing with natural disasters. Of course they have to be concerned about the potential for the dire consequences of hurricanes and tornadoes. Yet with something like Sandy, one cannot help but notice the striking difference between American preparedness and Russian fatalism.

As a foreign journalist living in the Washington metro area, I was a bit puzzled by the long, snaking lines of people in convenience and grocery stores like Safeway and Costco while Sandy was still a good 72 hours away from touching down on American soil. Moreover, according to weather forecasts, the chances of being hit hard by the hurricane in the nation’s capital appeared to be pretty low.

Still, Americans rushed to the supermarkets shelves, frequently emptying them, relying on the unrelenting media frenzy dissecting the upcoming “Frankenstorm.”

Of course I expected my neighbors to buy as much water and nonperishable foods as they could (and I picked up a few things myself). But it was more surprising to see fully loaded shopping carts with everything ranging from Coke Zero to pizza-flavored pretzels. Everyone also seemed to be buying enough toilet paper to see a large family through to 2013.

I wondered how on Earth cases of Coke could help one through the apocalypse, but then someone reminded me that the bourbon might already be stocked at home.

The Russian experience of preparing for natural disasters differs dramatically: We don’t. Or at least we don’t want to appear to be too prepared. Maybe we would be more likely to have some homemade canned goods. But that’s it. First of all, most Russians do not believe that their meteorologists are highly skilled in predicting weather patterns. Even if they hear about a “perfect storm” or a “snow alert,” Russians don’t pay much attention to potential bad news. In this sense meteorology in Russia has a long way to go.

Russians even take pride in their lack of preparedness. For instance, everyone knows that winter in Russia will inevitably come between late October and mid November and people have several months to get themselves ready for excruciatingly long, cold days. And change their cars tires from summer ones to winter ones. Still every year the first snow comes as a huge surprise to many Russians, causing even more gridlock on the roads than usual.

Secondly, and most importantly, a notorious Russian fatalism kicks in before a disaster. In some ways, this makes life easier in the sense that what is going to happen will happen one way or another. Russians shrug and say, “Hope dies last” (Nadezhda umiraet posledney), which means that people hope for the best case up to the bitter end.

And last, but not least – “We propose, God disposes”  (Mi predpolagaem - Bog raspolagaet) – Russians say, meaning that even if everything seems to be prepared in order to meet the upcoming challenges, something will inevitably go wrong. By being ready, you might even jinx yourself and cause something bad to happen.

Perhaps some Russians could fare better with an American-style eagerness to take warnings seriously and prepare for the apocalypse. But in the line at the Costco, after all the water, tea and bread has run out, or on the road evacuating your small town with three thousand other people, a hard-earned Russian fatalism might get a few Americans through their hard days ahead.