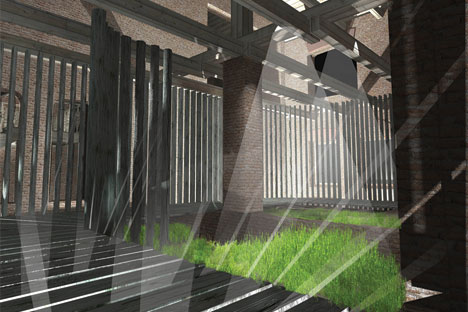 Creators of a new 'Ruins' exhibition in Moscow’s Shchusev State Architecture Museum ponder how to equip ruins but not to make them modern.

A little over a decade ago, Moscow’s Shchusev State Architecture Museum found that it did not have the funds to restore one of its wings. The solution of the museum’s director at that time, David Sarkisyan, was to turn the wing in ruins into “Ruins” – an unheated exhibition space with exposed brick walls, missing floors and crumbling ceilings. “Ruins,” intentionally unrestored to this day, is currently holding a new exhibition that is dedicated to its own history and the history of other buildings now famously in ruins.

“In Russia today, there are tens of thousands of ruins: the remains of once beautiful country estates, churches and so on,” said Narine Tyutcheva, the exhibition’s curator and head of Rozhdestvenka Architectural Bureau. “Most often, these are buildings were under the protection of the state and, as such, suffered from indifference and neglect.”

Built at the end of the 18th century, the museum that now houses “Ruins” belonged to Gen. Talyzin – a favorite of the famous Generalissimo Alexander Suvorov. Later, this building, which is located opposite the Kremlin, was inhabited by the Ustinov landowners from Saratov who often received the Russian poet Alexander Pushkin as their guest. 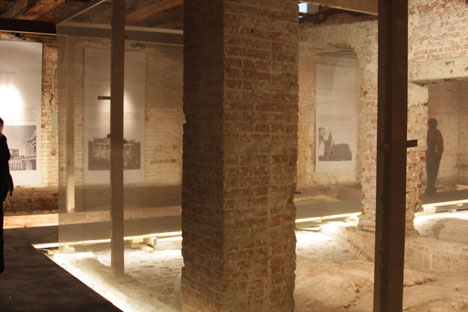 The architects have merely isolated the inner part of  “Ruins” with a net and installed special lighting that is meant to pluck the ancient parts out of the darkness and underscore them. Source: Alexandra Guzeva.

After the Revolution of 1917, the building (like many others built under the czars) was given over to the Communist Party. After World War II, it was deemed an architectural monument and bestowed the protection of the state. The 20th century and the government’s “care” turned it into a ruin. In 2000, however, Sarkisyan decided that the ruined space could be used for exhibitions.

For the new “Ruins” exhibition, four young architects came up with designs for outfitting the ruins of the wing. Their cardboard mock-ups of possible transformations stand alongside 3-D video installations that allow visitors to walk through a virtual “Ruins,” restored according to the concept of each architect.

The main idea behind the Italian project “Piu Forte” is an exaggeration of the architectural elements in “Ruins.” Silvia Gelain, the project’s author, uses cardboard pipes to draw greater attention to the most complex parts of the building.

Another project is called “Camera Obscura”; its creator is Anna Vishneva. Through small apertures on the outside of the camera, the viewer can evaluate the project’s contents.  Attention is focused on those places that allow visitors to assess the history of the building. The apertures themselves have been made in the shape of letters, which can be symbolically combined to form the Russian word Pamyat (Memory). 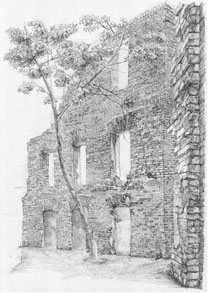 The project “Inclusion” transports the space to an imaginary building by means of a special bridge, which, according the concept of architect Gleb Galkin, should connect “appearance and reality.” “The most fitting name for this new milieu is ‘closeness’– the closeness of the old to the living and very active city of today,” said Galkin.

Architect Polina Bush, in her project “Entropy,” connects “Ruins” with the classical ruins of Ancient Rome. In the 12th and 13th centuries, that city’s once majestic edifices became overgrown with grass and served as pastures for cows. The main aim of this project is to make “Ruins” dissolve in nature, so that the manmade architecture organically dissolves into the landscape.

“The theme of … delimitation of space is very much in the air even now, in connection with the strange transition of urban Moscow spaces to a pre-feudal state: when the borders of land plots create closed systems, uncoordinated with their surroundings. Moscow is turning, little by little, into a large village,” Bush said.

“Ruins are our history and inheritance, a source of knowledge and inspiration; they are sites which demand architectural and constructional intervention; they are spaces in which to solve the practical problems of today, as well as … a succinct artistic and philosophical metaphor expressing the ephemeral quality of what exists,” said Tyutcheva.

These four projects will not likely be implemented, but that was never their aim. The architects have not touched the building itself; they have merely isolated the inner part of  “Ruins” with a net and installed special lighting that is meant to pluck the ancient parts out of the darkness and underscore them. The visitors’ path through “Ruins” remains unlit.

The exhibition will run till Nov.14. in Moscow's Architecture Museum, 5/25 Vozdvizhenka str.