Spanish patrol ships to be armed with Russian missiles 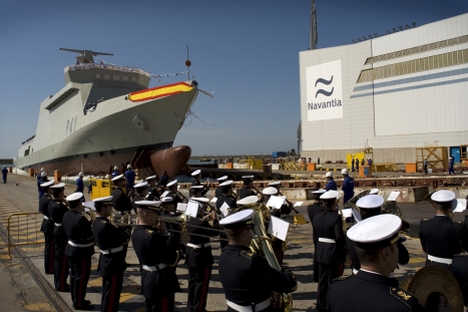 A new alliance between Russia’s state-run arms trader and a Spanish shipbuilding firm could changes the rules of combat.

The Russian agency Rosoboronexport and the Spanish company Navantia have signed a contract to arm Spanish Avante-class patrol ships with Russian weapons for further export to third-party countries. The agreement was signed during the Euronaval 2012 International Naval Defense and Maritime Exhibition and Conference in Paris.

Experts believe that the main objective of this alliance for Russia is to gain a stronger bid for the large contract to supply naval armaments to Kazakhstan.

“Modern Russian artillery, air-defense and missile complexes may be adapted for use on Spanish ships,” says Ruslan Pukhov, director of the Center for Analysis of Strategies and Technologies.

Spain has become one of the first NATO member states to engage with Russia in what is a very sensitive area of military and technical cooperation, Pukhov adds. The first joint project in this area was the creation of MANTA (Man Portable Air Defense Systems Threat Avoidance), a unique laser-based system that counters all types of infrared homing devices installed in air-defense guided missile complexes.

Under the contract between Rosoboronexport and Navantia, the Russian side will contribute its know-how, while the Spanish side will provide financing and ensure NATO certification of the finished product.

Last year, MANTA was successfully tested at France’s General Directorate for Armament (Direction générale de l’armement, or DGA) in Biscarrosse, and the system was recommended for integration in the onboard equipment of the bloc’s combat aircraft. The contract with Navantia is yet another bold move by Rosoboronexport for the entrance of Russian arms and military technologies into new sales markets, Pukhov says.

The 3M-54E system’s diameter allows it to be used in standard torpedo launchers, whereas the subsonic version of the missile can be installed in the transporter-launcher containers used in NATO member countries. The missile has a range of about 137 miles, which is the distance of its closest competitors, the American Harpoon and French Exocet. The 3M-54E is launched as a standard subsonic missile, guided by an inertial navigation system. It locks on the target with an active or optical-electronic homing device, drops two subsonic stages 37 miles from the target and activates the third, supersonic stage with a solid engine, which accelerates the missile to 0.6 miles per second in a fraction of a second. Its velocity and low flight pattern (about 6.5-10 feet above the surface) make it virtually impossible to intercept with naval air-defense systems and guarantee target destruction.

The Russian exporter has reported revenues of almost $13 billion so far in 2012. However, in order to preserve momentum, Moscow needs to look for new markets in which to sell its weapons and military equipment. This is especially relevant now that relations with its traditional strategic partners – India and China – have cooled somewhat. Both countries have recently favored Western arms systems, rather than those made in Russia.

Latin America has become a new niche for Russian exporters. Thanks to Venezuelan President Hugo Chavez, Moscow has managed to secure a foothold for the expansion of its presence in South America. However, Venezuela’s loyalty alone is not enough for Russian suppliers, because Spanish producers have dominated in the Venezuelan market for decades – if you cannot out-compete them, join them.

Naval arms account for 15 percent of Rosoboronexport supplies. Navantia has a substantial portfolio of orders for the construction of battleships of various classes in the region. Venezuela alone has recently purchased four Povzee-class patrol ships built on the Avante platform.

Moscow has virtually no international competitors when it comes to this type of weapon. Most Russian-made missiles fly at supersonic speeds and have complex flight patterns, making it impossible for naval air-defense systems to intercept them. Russian arms makers have shown a broad portfolio of such missiles at recent naval exhibitions, the main strike force of which is the newly developed 3M-54E system.

“The 3M-54E is one of the best-sellers of the Russian defense industry. The missile is actively advertised and promoted in foreign markets. Rosoboronexport is ready to supply it as part of a coastal missile package and install it in surface ships and submarines. Povzee-class chips can also be equipped with these missile systems,” says Vadim Kozyulin, professor at the Academy of Military Sciences.

The Rosoboronexport-Navantia alliance will soon offer a very competitive product that could seriously change the combat potential of any given country.