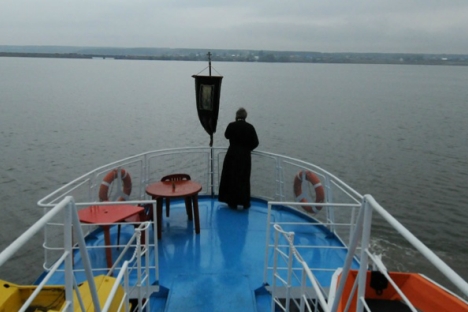 Before the revolution, priests would study medicine and go out to the villages to provide medical help, among other things. Source: Andrey Shapran

Every year, the Novosibirsk floating church, with priests and doctors on board, visits villages 60 miles out from the banks of the Ob River.

The idea of sending a floating church down the Ob came from the Rev. Alexander Novopashin, dean of the Cathedral of Saint Alexander Nevsky. The first time the boat set off on a missionary trip was in 1996. A year before this, priests had travelled through Novosibirsk Region on the Memorial Train, which was dedicated to the 50th anniversary of V-E Day.

“The roads in the region were in a very bad state, as was river transportation in the 1990s. At that time we decided to charter a little boat,” said Novopashin. “We chose one together, with a priest who used to be a river boatman. We decided on the OM-378 – a boat that belonged to the Novosibirsk Region Environment Committee – and we set off on a trip with a group of priests."

View the gallery: Floating church with priests and doctors travels down the river Ob

"On the first trip, we sailed for a long time and didn’t moor until one o’clock in the morning – and we found the whole village waiting for us on the riverside! We were baptizing people right there in the Ob River, until the sun came up. The first time, we took a creative team with us; but when we got there, we could see the people in the village needed not only priests but doctors.  And so we put together our first team of medics,” he said.

Before the revolution, priests would study medicine and go out to the villages to provide medical help, among other things. Eleven specialists currently work on the missionary team. Most of the doctors go every year. The medics do not get paid extra for working with the mission – just the usual, plus a travel allowance.

The conditions are Spartan: four people to a cabin, with fold-down shelf beds that are similar to the ones in railway sleeper cars. Everyone gets up at seven in the morning for a prayer service, followed by breakfast and a couple of hours’ travel to the next village.

The mission serves villages located a maximum of just over 60 miles away from the river. Each doctor sees 60-70 people per day. On the current trip, the doctors have seen 4,941 patients, 615 of whom were children.

“At first we were struck by how spiritually oppressed people in the villages were. Back then, people were losing their jobs in the towns too. And in the villages everything had fallen apart: the fields had been abandoned, and, on the farms, only the shells of buildings and broken equipment remained,” said the Rev. Konstantin Rabota, the mission’s organizer who has been on the boat ever since its first sortie.

“People in one village in Bolotinsky District were living without electricity – all they had was an oil stove. Children were collapsing from hunger. It was terrible. In this context, we discovered that people had a very real interest in the spiritual life. We were baptizing up to 200 people at a time,”  he added.

Now the local authorities provide buses. When the missionaries arrive, they are given space in schools, civic centers, village first-aid stations and local hospitals. Where none of these exist, they work on the street. They serve all comers.

When they first started, the priests would baptize up to 2,000 people per trip. Then the numbers began to decline, but they rose again four years ago: families had children. The birth rate in many villages had risen above the mortality rate. This year, 718 people have been baptized.

As for why the doctors go on a missionary trip every year, even the medics themselves cannot explain it. Olga Fishova, an ultrasound scanning specialist at the Novosibirsk regional clinical hospital, has taking part in missionary trips for 15 years in a row.

“The second time I went, it didn’t worry me at all that there would be lots of work to do. You see, out there, the level of relationship is higher," said Fishova. "We start to understand each other with a gesture, a look. Sometimes we even think alike. Sailing changes the relationships between us. I can be standing in the corridor at our hospital, talking to a doctor I’ve traveled with, when a colleague runs past and asks: ‘I guess you’ve been on the boat together? You have a different way of talking!"

“Any real doctor who analyzes his own work cannot fail to believe that God exists. He understands that doctors don’t decide everything that happens. I’ve talked about this with the resuscitation specialists after some trips, and they say: we see that every day,” she added.

It is often very difficult to persuade village people to go to the regional hospital in the city. Some people do not have the money; others have no one to leave their children with; and others just want an ultrasound scan and do not need anything else. The priests are brought in to persuade them, and even the head of the local administration has been called in for those conversations a couple of times.

On the current trip, eight infractions have been diagnosed, as well as diabetes, thyroid abnormalities and tumors. These days, however, doctors do not come across cases of disease in advanced stages, as they did in the earlier years of these trips. On the other hand, there is something else…

“The farther away from Novosibirsk or the district centers you go, the nicer people are," said Fishova. "But the closer you are, the more demanding they are. In the last three or four years we’ve often heard people say: you have to, you’re obliged to, and why do you leave at six o’clock – you should sit here until the last patient! I think that’s the way ‘anti-medical’ propaganda is working: all those endless programs about doctors being negligent or making mistakes."

"The young are starting to calculate how much we’re getting for this mission," she added. "But we don’t get anything – just our pay, plus 100 rubles ($3) in travel expenses.”

“A 96-year-old woman came to see us one day," Rabota continues his story. "She had lost her husband in the war and raised 11 children by herself. I asked her: ‘Who helped you? Did you marry after the war?’ She looked at me and said: ‘I am married!’ Such was the strength of spirit of that generation – there was nothing I could say."

"It seemed as though these grannies, who had lived through everything without breaking, were passing on the baton to us,” Rabota.  said. “A train was initiated, sharing the purposes of our ship, and it travels around Russia. But they’re still not making use of our experience with the boat. There are so many places in our country that no train can get to – places like that can only be reached by river.”