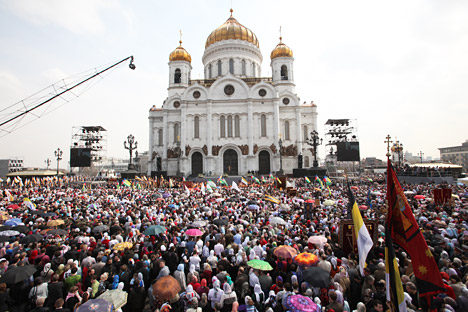 Recent incidents related to religion and politics within Russia's community brought together a bill imposing criminal charges for those who insult religious feelings of people. Source: ITAR-TASS

The State Duma is considering a resolution that defends the religious beliefs of Russian citizens. Lawmakers are convinced that Russia needs harsher penalties against offending religion and religious persons, but experts are not so sure.

Russian parliamentary deputies have decided to stand up for religious believers. On Sept. 25, the State Duma began drafting a resolution entitled “On Protecting the Religious Beliefs of Citizens of the Russian Federation.” Deputies from all political factions joined the group that sponsored the resolution.

Yaroslav Nilov, head of the Duma’s Social and Religious Organizations Committee, supports the adoption of stricter legislation in this area, which comes in the wake of a recent string of highly publicized, religiously motivated events. The deputy singled out Pussy Riot’s incendiary performance at a Moscow cathedral, as well as other actions aimed at representatives of different religious communities.

“Icons have been desecrated in various cities across the country. Temples and synagogues have been defaced with swastikas, satanic symbols and various inscriptions. Islamic spiritual leaders were killed or injured in two high-profile terrorist attacks in Dagestan and Tatarstan. A wooden church was burned down in Krasnodar and a Protestant prayer house in Moscow was demolished... This is a challenge to peace in the country, and we have to respond in a timely fashion,” Nilov said, listing off anti-religious incidents.

Deputies think that the current maximum penalty for insulting religious beliefs is too small – a 1000-ruble fine (around $32). According to the proposed amendments, desecration of objects of worship would mean up to five years in prison, 400 hours of mandatory community service or a 500,000-rouble fine (a little over $16,000). Offending religious worshippers would warrant a 300,000-rouble fine ($9,600), 200 hours of community service or up to three years in prison.

“Offending the beliefs of worshippers is dangerous”

Representatives of key religious communities have voiced their support for the deputies’ initiative. According to Vsevolod Chaplin, a spokesman for the Russian Orthodox Church, it is national security that is at stake here.

“Making an ethnic slur, desecrating objects of worship or insulting religious beliefs are very dangerous things to do these days. As we know, such actions have led to many conflicts throughout history, resulting in blood and setting large numbers of people against each other,” Chaplin said.

Russian Muslims have also stressed national security concerns. In particular, they have approved of the government’s plan to enforce a ban on the distribution of the "Innocence of Muslims" video in the country. “It is very important for the government to understand the feelings of its society, of its people. In countries where officials didn’t react in time, where people didn’t find understanding and support from the authorities, they poured into the streets in protest,” Moscow mufti Albir Krganov said.

“It is necessary to pass laws that would make a person plotting to insult believers think twice,” said Rushan Abbyasov, deputy chairman of the Russia Mufties Council.

The Federation of Russian Jewish Communities has also taken an official stance in support of the deputies. “It is very important to increase the penalties for offending religious beliefs, especially in view of the anticlerical campaigns underway in various countries at the moment. We can see what they are leading to,” the organization’s president, Alexander Boroda, told Interfax-Religiya.

It would be an exaggeration to say that the entire Russian society has welcomed the proposed legislation. According to Lyubov Borusyak, a sociologist and associate professor at the Higher School of Economics, the bill leaves too many loopholes for abuse. “Such a law could never work universally, by definition. It is always going to be selective; it will always be arbitrary, because it’s impossible to describe specific actions subject to this law. And if this is impossible, you can apply the law to anything you like,” Borusyak told BBC Russia.

Kommersant FM radio observer Konstantin Eggert believes the existing legislation is already sufficient to protect religious believers. “Any attempts to pass new laws would amount to nothing more than attempts to impose censorship, which wouldn’t be welcomed by a considerable portion of society and would cause a future backlash against the Church,” Eggert said.

Some representatives of leading religious communities are also uneasy about the deputies’ initiative. Rabbi Michael Yedvabny shares the concerns expressed by Eggert. “The Criminal Code already contains penalties for inciting religious or ethnic hatred, as well as for religion- or ethnicity-related hate crimes. Unlike those provisions, the proposed punishment for offending religious beliefs is dangerously encroaching upon the concept of freedom of speech,” said Yedvabny.

Archpriest Pavel Velikanov, Provost of the Moscow Orthodox Spiritual Academy, also has his doubts about the proposed bill. “I feel discomfort about the fact that a person who claims to be religious would receive some kind of special status relative to another person,” the archpriest said. “I cannot understand why the status of an ordinary person who isn’t claiming any religious affinity should be inferior to that of a religious person demanding protection.”

Combined reports from RIA Novosti, Kommersant, and the Pravoslavie i Mir magazine