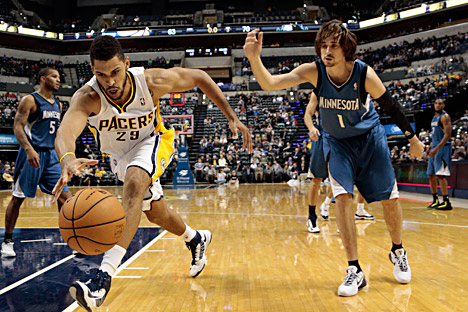 Indiana Pacers forward Jeff Pendergraph, left, chase down a loose ball in front of Minnesota Timberwolves guard Alexey Shved during the second half of a preseason NBA basketball game on Oct. 12 in Indianapolis. The Pacers won 96-91. Source: AP

The new NBA season opened on Tuesday, Oct. 30. The Russian contingent has tripled in size since last year: CSKA Moscow’s Alexey Shved and Andrei Kirilenko will be joining Timofey Mozgov in the world’s top basketball league. Together with Mikhail Prokhorov, the owner of the Brooklyn Nets, the three players are ready to open the “Russian front,” and their ambition is through the roof.

American basketball just got more interesting, and Russian NBA fans are in for a treat. One reason is the ambition of Mikhail Prokhorov’s Brooklyn Nets: the Russian billionaire has promised to win the championship in the next few years. However, the bronze medalists of the recent London Olympics are definitely the main reason for Russian fans to look forward to a Russian triumph.

Timofey Mozgov was not exactly instrumental in boosting the NBA’s popularity in Russia. While the center is immensely popular at home, he is still a role player in the United States. Mozgov is not even a regular starter for the Russian national team, although he did get more than his fair share of playing time at the Olympics. He is still struggling for more time on the court with the Denver Nuggets. American experts call Mozgov one of the fastest 7-footers in the league, but they do not see him as a starter yet.

Business also interferes in the player’s career. Mozgov, who is in the last year of his contract, starts most games on the bench. Odds are that he could be traded mid-season.

On the one hand, the center has everything to play for – both his future salary and his career in the NBA. Still, experts tend to think that the only mystery is where he will finish this season. If he is lucky enough, he will sign with a team that can appreciate him and benefit from his game. So far, Mozgov’s ninth contract with the team indicates his real status on the court. Timofey’s main task is to play the role of sixth man effectively.

The outlook for Kirilenko and Shved looks far more promising. Andrei is a bona fide star – both his contract and status prove this. Kirilenko, nicknamed “AK-47,” may have spent last season in Europe, but he never lost his relevance across the ocean. He is set to make $10 million per year and his place in the starting five is guaranteed. But all this comes with huge responsibility; Andrei is is here to win games.

The long-time leader of the Russian national team has settled in Minneapolis, rented a house and taken on the role of team leader. It is a role he is used to. He is ready to take the Timberwolves to the playoffs, along with Olympic champion and main star of the team, Kevin Love.

Spectators should not expect extraordinary statistics from the Russian forward, however. He will score some baskets, grab a few rebounds, block shots and provide a modest amount of assists – that is for sure. But his main asset is his stability on defense, which will give Minnesota consistency through the marathon in the regular season.

Alexey Shved is an up-and-coming player whose potential is still largely unknown. Yet great things are expected from him. The defender made a number of appearances this preseason, and he is on his way to becoming the best shooter on his team, even though he spends less time on the court than the starting five. More points are what everyone expects from this creative shooter.

Shved rarely acts as the playmaker. Back in Russia, both CSKA and the national team demanded a team effort from Shved, and he was always being reminded that he was playing alongside his fellow teammates. So, in his new surroundings, Alexey is in heaven: they want him to be aggressive, show initiative and shoot consistently. If the 24-year-old defender takes his shooting stats to a new level, his three-year, $10-million contract will be the cheapest of all starting players in the NBA.

But he still has a lot of work to do before he makes it into the starting five. Specifically, he needs to maintain his audacious rhythm and average more than one point per minute. The high expectations do not mean that the competition inside the team will be any less fierce, but Shved’s potential stirs the imagination of Russian fans.

First published in Russian in the Izvestia newsaper.