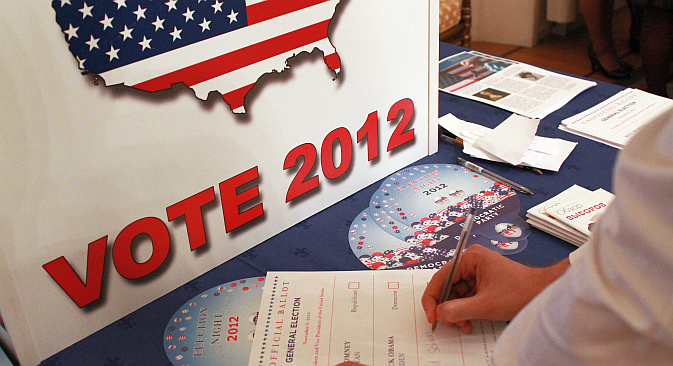 Guests at the Election Night at the U.S. ambassador’s residence could cast their “votes” for Obama or Romney. Eventually Obama won by a landslide with 131 votes to 27, said Sheila Gwaltney, Deputy Chief of the U.S. Mission in Moscow. Source: RBTH

While the voting in the U.S. presidential election showed Barack Obama beating challenger Mitt Romney narrowly by less than 1 percentage point, in Moscow on Election Night the result was somewhat different.

U.S. Ambassador Michael McFaul may be an outspoken figure in Russia on elections and democracy, but he clearly relished the chance to hold a “shadow election” of his own at Spaso House on Tuesday evening, as voters back home went to the polls for real. 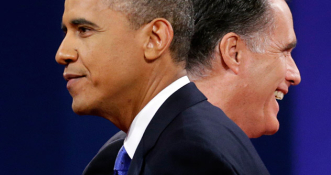 Guests at the traditional Election Night party at the ambassador’s residence could cast their “votes” for President Obama or Governor Romney. Eventually Obama won by a landslide with 131 votes to 27, said Sheila Gwaltney, Deputy Chief of the U.S. Mission in Moscow.

All guests received souvenirs and badges, and got to pose with cardboard cutouts of the two U.S. presidential candidates.

No election would be complete without a political stump speech or two, and Ambassador McFaul devoted part of his address to guests to the need for reform of the U.S. electoral college system.

“Of course, our election system isn’t ideal,” McFaul said in his speech. “I read Twitter, I read what the politicians say. And it’s great! But tonight I don’t want to discuss this. I’m glad that there are critics. I believe that they strengthen the democracy. I personally think that we need to decide how to change the voting system. Like my president, Barack Obama, I think that the campaign was way too expensive. There’s no need to make it that expensive, we need to think how to do it another way.” 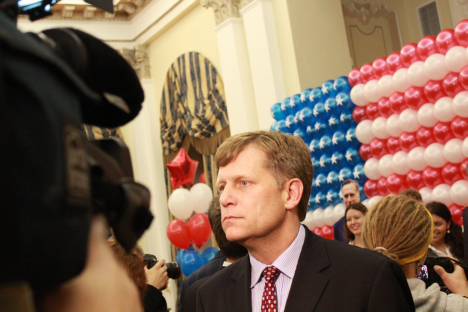 Ahead of the real election results overnight, RBTH spoke with some of the schmoozing celebrities, experts and scientists to ask their opinions about the U.S. elections and their impact on relations between Russia and the United States.

Yevgeny Satanovsky, president of the Institute of Middle Eastern Studies, didn’t think the outcome of the election would affect Russian-American relations.

“I don’t see why U.S.-Russia relations should change after the elections,” he told RBTH. “Why? It makes no difference for Russia who will become president – Republicans or Democrats. The only difference is that Republicans tell us the truth, while Democrats lie with a diplomatic smile. What bonuses and benefits can Russia take from this? None.”

This situation will not improve until Russia changes itself, Satanovsky added. 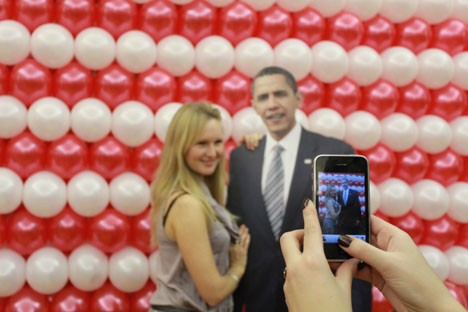 By contrast, Edward Crawley, a professor from the Massachusetts Institute of Technology who has taken a teaching post at Skolkovo, argued that the outcome of the U.S. elections would influence the relations strategically, but not fundamentally.

“The general attitude in Washington is that foreign policy is bipartisan,” Crawley said. “There are certain strategic relationships that the United States maintains more or less regardless of whether the next president is a Democrat or a Republican.”

“However, in this particular case, one of the candidates indicated that he is less favorably inclined toward Russia than the other,” Crawley said. “So I think that we may see some differences in U.S. foreign policy and the relationships between the United States and Russia, but not fundamentally. Fundamentally, these are two nations who need to work with each other and understand each other. ”

“The difference between being a candidate and being a president is a big difference,” Crawley added. “If Governor Romney is elected, in the first few months there might be some rhetoric. But in the long term there might be strong relations and partnership between Russian and the United States.” 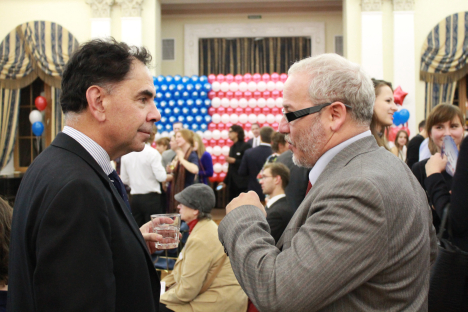 Alexei Malashenko, an expert at the Moscow Carnegie Center, said that U.S.-Russia relations depend largely on the Kremlin’s policy, and added that, traditionally, Russia’s leadership was often more comfortable with a reliable enemy than an unpredictable ally.

Russia ready to go as far as Washington is prepared to go, said Lavrov

“If the elections influence relations, this influence will be minimal,” Malashenko said. “I think that 70 percent of U.S.-Russia relations will be determined by those who rule in the Kremlin. Of course, it is more convenient for Russia’s establishment to deal with Romney. It seems to me that in case of his presidency U.S.-Russia relations would become worse, like it was during Bush’s presidency.”

Russian TV presenter Nikolai Svanidze argued that Romney might be tougher on Russia if elected, but this would lead to the Kremlin pushing back harder, too.

“The elections might rather change the Kremlin’s domestic [and foreign] policy, and relations between two countries if Romney were elected. In this case the pressure on Russia would be increased,” he said. “In response to this pressure, Moscow would tighten the screws within the country.”

Gleb Pavlovsky, head of the Foundation for Effective Politics, said it was difficult to predict in advance to what extent U.S.-Russia relations would change after the elections. “Obama might take a tougher political course, while Romney could tone down his harsh rhetoric,” Pavlovsky said. “It’s not so important for Putin’s Russia… In reality, the Kremlin doesn’t care much about the results of the elections because Obama or Romney can’t influence U.S.-Russia relations.”

For Russia, internal politics is currently more significant than relations with the United States, Pavlovsky said.

“America is a kind of mythological value for Russia’s foreign policy and we have few cross points for collaboration,” Pavlovsky said. “Rather, we have more common ground with Europe.”

John McCarthy, Russia manager for National Oilwell Varco, an oilfield services company, argued that Romney might be a better partner for Russia than Obama.

“Either way it will have an impact, but at the end of the day it won’t be as bad or as good as each candidates says. In the end the U.S. will fine, no matter who will win,” McCarthy said. “I think Romney might be better for U.S.-Russia relations – at least he is straightforward with what he thinks. He would be an honest partner for Russia, and relations would be built on trust and common interests.”

Several hours later, as the election results came in from the U.S. – showing that Obama had won at least 303 electoral college votes (270 is the minimum required for victory) – a dozen American expatriates gathered in Starlite Diner at Oktyabrskaya in Moscow to watch the election coverage on CNN.

“Less than 1 percent majority in the popular vote – it’s not much of a mandate for Obama,” one American said as he analyzed the results over coffee with friends. “Four years ago, this room was full of people going wild over Obama’s victory. This time, it’s much quieter.”