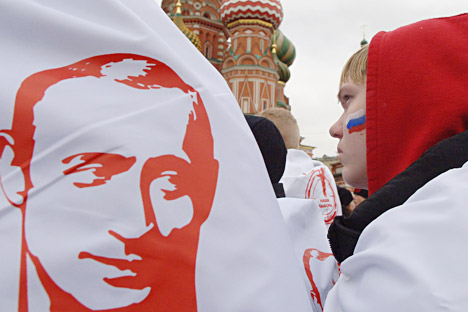 Even among those who voted for Putin, no more than 27 percent (versus the average 24 percent) believed that the organizers of protest actions sought “to overthrow the government by organizing mass riots.” Source: ITAR-TASS.

Even pro-Putin voters would not like to see another “job swap” in 2018.

A poll conducted by the Levada Center in October has registered no change in the approval ratings of Russian President Vladimir Putin (67 percent) and Prime Minister Dmitri Medvedev (61 percent). Like previous polls, this one does not support the claim that their ratings are steadily falling, nor the opinion that there would be less criticism of Putin if Medvedev were sacked.

Apparently, this is not about iconic personages and their ratings. The fact that the ratings do not change bears witness to a new socio-political reality.

Take the most pro-Putin social strata – those who said they voted for him in March and among whom he enjoys a 90 percent approval rating. Who are these people? Their incomes and education levels do not differ much from everybody else, but the group’s gender and age structure is very different. Women account for 61 percent of those who described themselves as Putin voters, although their share in the voting-age population is barely 54 percent. The share of people over 40 years of age that voted for the current president is 63 percent, compared with 57 percent in the electorate as a whole.

As for ordinary Russians, it is true that the most frequently mentioned event among these respondents was their leader’s recent hand-gliding flight alongside a flock of cranes. But they attached equal importance to the sentence passed on Pussy Riot, and described the stripping of Gennady Gudkov of his Duma mandate as an even more important event.

It is true that they support mass protest actions less ardently than other sections of society (20 percent, compared to the 30 percent average), but almost as many of them (11 percent, as opposed to the 14 percent average) said they would be ready to join them. This is no indication of the turnout at future rallies. This is an indication of how Russian society feels about non-violent mass protests – actions that are now called “mass disturbances” in official speak.

Even among those who voted for Putin, no more than 27 percent (versus the average 24 percent) believed that the organizers of protest actions sought “to overthrow the government by organizing mass riots.” Moreover, fewer of them than compared with the public at large believe that there had actually been negotiations between Georgian politicians and Sergei Udaltsov “on financing unrest and terrorism in Russia.” This section of society is more likely to declare that they “do not believe the official version.”

So far, Putin’s supporters have been discussed. They are the citizens who remember his birthday 1.5 times more frequently than others, and who more readily describe him as “an intellectual and a gentleman.” Their attitude toward Putin, of course, sets them apart from the rest of Russian society: the majority of them wish to see him as president after 2018, which is in contrast to the rest of society. They are also more supportive of the current prime minister, although, in general, they would not like to see another “job swap” in 2018. This is in line with popular opinion, as 45 percent of Putin supporters and 49 percent of other citizens are confident that, “before 2018, Russia may get a leader capable of replacing Vladimir Putin in his post as president.”

Aleksey Levinson is the head of the Levada Center’s Socio-Cultural Department.