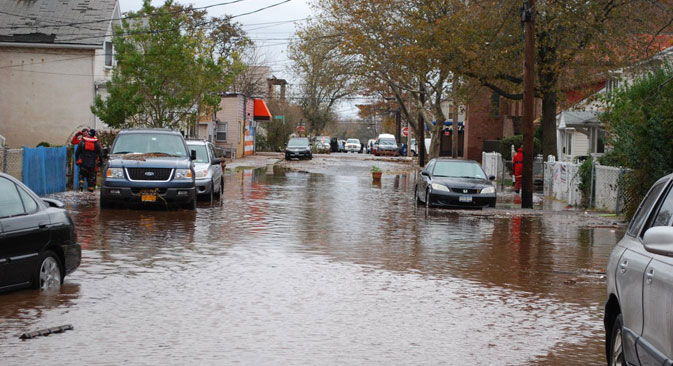 A day after President Obama was re-elected, RBTH contributor Xenia Grubstein took the ferry to Staten Island, one of the biggest Russian-American enclaves in the United States. With residents looking for gas, water and pumps more than a week after Hurricane Sandy, few were talking about the election.

The day after President Barack Obama was re-elected president, the Staten Island Ferry was running as usual. But Manhattan’s Whitehall Terminal was only half-lit because of the continuing lack of electricity in Battery Park. Once the ferry reached the island, passengers were met by a sharp wind and a nasty wet snowstorm. Bus service on the island was surprisingly stable, given that many buildings were destroyed, and some households still have no power.

“Let’s meet at the gas station,” said Vassily Zayats, a 49-year-old engineer, who agreed to show me around. “You won’t miss it. Ask anyone, they’ll show you.” These days, gas stations are hotspots where people congregate. They are desperate to get their cars running. “A few days ago they began selling gas at a few particular filling stations, and the lines are like four hours long,” Zayats said.

It’s too early to make plans for rebuilding what’s lost. “Nothing has been restored,” he added. “A friend of mine has been trying to get hold of his insurance company for three days now with no success. They just don’t pick up the phone. And he can’t start re-building things before the adjuster comes and assesses the damage.”

Mira Saikina, in her 60s, is an administrator at a medical office. She lives on Oceanside Avenue with her husband and her dog. Saikina said the authorities performed well during and after the hurricane, but that they could have thought more about elderly and disabled people. “I was visiting my son in another state and missed all the public announcements,” she said.

“I heard we were in Zone A and needed to evacuate, but I didn’t know we were supposed to do it ourselves, nor did I know where to go. I don’t use the internet. You know, they stick so many useless papers in my mailbox, but this time they could have really helped us by distributing flyers with shelter information, leaving stickers, making street signs.”

Saikina said she is very grateful to her son, and to the companies who provided cleaning supplies to those affected by the super storm. She completely missed election night, she said. “My fridge on the first floor was floating, and my carpet is rotting in the backyard now. What do I care about elections?”

Irina Lipovetskaya, who is in her 40s, lives with her boyfriend on Oceanside Avenue. She recalled the night of October 29: “We were stupid enough to stay at home. Water started coming around 8:20 p.m., and in 40 minutes we had approximately 6 feet of water. Our three cars were floating. We escaped to the second floor, but all our appliances, furniture, and lots of other things are totaled. Including all my shoes – for days I haven’t been able to go outside.” She spoke standing in a hallway with no internal walls, while a repairman measured the rooms.

Hurricane Sandy: learning to live with it

Zayats’ friend Arkady, a local businessman, did not want to give his last name.  “Yes, my property was damaged,” he said, “but not more than everyone else’s. We’ll survive, we’ll get some insurance money – not that it will cover our loss, but better than nothing. The worst thing is the lack of power. We stayed in our building for 6 days, hoping for electricity, and then have moved to friends. The water was so high, because on one side there was wind from the ocean, on the other side, the water from Long Island came to the East River and then to us. Plus, the high tide and a full moon. In other words, you could have called it a perfect storm. Staten Island residents who have lived here for 70 years told me they’ve never seen anything like that.”

Despite Sandy and its aftermath, Arkady followed the presidential election closely and was “slightly disappointed” with the results. “I think Republicans should change their strategy based on this election, and think about attracting more Hispanic-Americans,” he said. In any case, he said, “We are going to be OK here, as soon as electricity is back on.”

Another Zayats’ acquaintance, Lvov-born Andrey Ivakh, 41, a designer of wedding and evening dresses, said the main reason residents did not take the Sandy warnings seriously was last year’s experience with Hurricane Irene, when the threat seemed severe but the storm passed without much incident. But on the night of October 29 he “realized, what great people surround me and my family, and how well everything was organized.”

Lipovetskaya echoes Ivakh’s words. She said she was moved by the presence of volunteers who came to check in on her and offer help. “The Red Cross and the army were here all the time. I saw them distributing hot pizza in our neighborhood. Strangers stopped by to see if we needed food, clothes, cleaning supplies. Some lady was driving around offering homemade hot soup to anyone who needed some.” She added that a group of about 20 school kids came to help clean their backyard.

“A young women knocked on my door and asked, whether I lost any family photographs. She said, she is a photographer and that she will take our family pictures for free. That’s when I lost it,” Lipovetskaya said, beginning to sob.

“I’ve lived in America for 30 years, and I’ve never experienced anything like this,” she added after an emotional pause. “I feel so blessed to be living in this country.”

It was getting dark, and as a Nor’easter approached, the wind was getting stronger and snow started to fall. Zayats apologized that he could only give me a ride as far as the bus stop.  “I’m sorry I can’t drive you all the way to the Ferry Station,” he smiled apologetically. “But gas costs like gold these days, and I need my car for my work.”