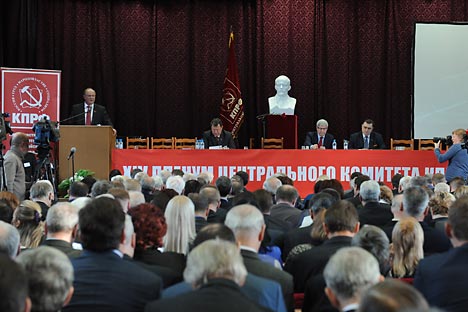 The October plenum of the Central Committee of the Communist Party of the Russian Federation confirmed that, despite its poor showing in the regional elections, it does not plan to alter its general line. Source: Vladimir Fedorenko / RIA Novosti.

Russian political parties are losing support not only among voters but also among their own members. One of the main problems with the modern opposition is the lack of unity within its own ranks.

The record low turnout for the regional elections on Oct. 14 was as much of a surprise to Russian political forces as the sudden awakening of the Russian people in December 2011. Acknowledging that they could not understand or control the Russian voter, parties decided to correct the situation after the fact. Several opposition blocs within the established political system immediately held congresses at which they attempted to revitalize their programs and rally their supporters. The weekly magazine “Ogonyok” monitored this search for new agendas.

Arguments on the sidelines about fairness

A Just Russia convened its party congress at a hotel some 15 miles outside of Moscow, as if to underscore its symbolic distance from the Kremlin and its desire to move closer to the regional voter. But both of these efforts had their problems. As party leader Sergei Mironov admitted publicly, A Just Russia received only 2.7 percent of the total number of votes cast on Oct. 14. The 13 percent of the popular vote, which the party won in the State Duma elections last December, is slowly melting away.

Political protests have made Russians more interested in elections

The hopes and feelings of Putin's supporters

It is hard for a party to pull itself together when agreement among its members is wavering. Vladimir Parakhin celebrated the party’s sixth birthday by defecting from it – the eighth Duma deputy to do so thus far. At the party’s congress, Mironov spoke of a possible party schism. In his opening address, Mironov said that A Just Russia was suffering from a political sectarianism against which must be fought. Mironov defined “sectarians” as those members trying to ride the wave of street protests: Gennady Gudkov and his son Dmitry, as well as Ilya Ponomaryov. Mironov said that these three members were responsible for A Just Russia’s poor showing at the polls.

The “sectarians” insist that A Just Russia is in need of a serious transformation: it needs to redirect its efforts to the middle class, have a presence online and become financed “through fundraising.” But these ideas are anathema to the party’s leader and to most of its members.

The lack of coordination among members of A Just Russia was reflected even in the differences in their style of dress. On the one hand, there was a group of gray-haired men from the provinces who wore red flag pins on the lapels of their rather modest jackets. On the other hand, there were middle-aged men – entrepreneurs – wearing expensive cologne and the Russian tricolor flag on their expensive suits. The men in the modest jackets clearly resented their colleagues in the expensive suits, no matter who they were – “sectarians” or “members working within the system.”

Too general a platform

Hints of a schism and lack agreement were also visible in the Civil Platform party, which was recently founded by billionaire Mikhail Prokhorov. At its first party congress, Prokhorov, who still has not learned to project his voice for large audiences, revealed from the stage, in a business-like manner, the key points of his program: professionalism instead of clientelism, a revival of culture and limits on the influence of the Church, the abolition of districts, and attention to the individual. Before launching into his next proposal, Prokhorov made it clear to whom his remarks were addressed: “We are a new political generation.” However, a number of the delegates made it equally clear that they were expecting from Prokhorov that which he had no intention of offering.

“As a leader, he must be the chief,” said Nuria Kurmalieva, chairman of the Astrakhan branch of the Civil Platform party, as she savored the delicious liver served at lunch. The recipe goes by the amazingly appropriate name of “Gulliver,” which is a reference to the extraordinary height of the amazingly tall Prokhorov. “Before Prokhorov, I supported the People’s Party and personally supported Gennady Ivanovich Raikov. He too was a real man! He wanted to outlaw homosexuality and spoke seriously about it. But now I’ve had a look at Prokhorov, and I have the feeling that he can do it.”

Prokhorov’s key electorate (whom the experts take to be members of the business community) also has questions for him. At first they saw Prokhorov as their lobbyist; but at the party congress, many had the impression that they were not being paid enough attention: there was a lot about culture and about the individual, but little about support for entrepreneurs. Moreover, Civil Platform’s federal political committee includes almost no private entrepreneurs. On the other hand, it does include, for example, Sergei Militsky (an FSB colonel with the special division Alfa) and Andrei Nazarov of Rosreserv. The federal civil committee looks even broader – it is a sort of forum for discussion within the party. It includes the famous charity worker “Doctor Liza” (Elizaveta Glinka) and Vladimir Ryzhkov, co-chairman of the RPR-PARNAS party.

The Civil Platform party congress ended on the same note as the congress of A Just Russia. While handing out telephone numbers to various journalists, the party’s regional heads said in unison: “Don’t call us for now, since we still don’t know what our program is and what to tell you.”

Then again, the party program of the Communists has been intelligible not only to its members, but to all of Russia for the last 20 years, if not for the last 100 years. The October plenum of the Central Committee of the Communist Party of the Russian Federation confirmed that, despite its poor showing in the regional elections, it does not plan to alter its general line. Party leader Gennady Zyuganov gave a speech about “improving the party’s ideological and theoretical work,” which essentially boiled down to a story about long-suffering Russia. Given Zyuganov’s liberal use of Cold War era rhetoric (“machinations of world imperialism,” “Washington hawks,” etc.), it was not surprising to hear that the Communist Party remains true to its main aim – “to cure capitalism with socialism.”

Of more interest was the discovery that, “given the current political situation,” the Communists are planning to unite the leftist forces and head up the country’s protest movement. Judging from their new slogan presented at the plenum – “Workers and patriots, unite!” – Communists still see workers (not the creative class) as the nucleus of their movement. Yet the party’s newest members, who received their party cards at the plenum, bore no resemblance to that “nucleus.” They were mostly entrepreneurs and students, and they all support the idea of revitalizing the party.

But the party bosses, rattling their ideological armor, clearly have no intention of changing. They want to preserve their vertical opposition within the system. Instead of a rejuvenated party, new members can look forward to the creation of a communist internet-television channel and the opening of a Center for Political Studies. These promises did nothing to excite the party’s youngest members, who looked bored in the back rows and talked amongst themselves on the sidelines of the plenum. Russia’s voters are also bored.

The full version was first published in Russian in Ogonyok Magazine.