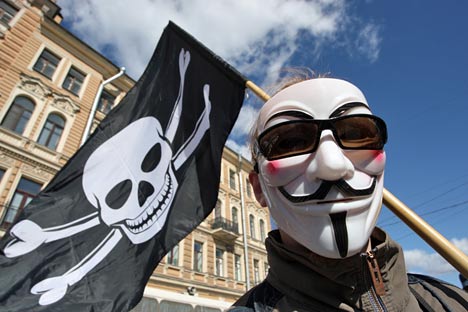 I don’t think that YouTube or VKontakte will be banned as soon as the law comes into effect. Everyone can draw comparisons with Iran, Afghanistan or North Korea. But YouTube features lots of legal material that doesn’t violate any laws. Source: Photo

Stanislav Shakirov of the Pirate Party of Russia speaks to a Russkiy Reporter about online democracy, black-listed websites and collaboration between security services and Internet companies.

The Pirate Party of Russia is an official founding member of the umbrella organization Pirate Parties International (PPI). However, it is not easy for the party to assert the interests of Russian Internet users, because the organization is not officially registered. Russkiy Reporter speaks to the party’s vice president, Stanislav Shakirov.

Stanislav Sharikov: We have nominated our candidate for the mayoral elections in Kaliningrad and, whatever the outcome of the voting, I believe that it is a great success. Well, it’s hard to identify the greatest achievement, but there have been many less significant ones. We supported Wikileaks when the situation was dire; we were involved in developing the Moscow Copyright Convention, which became the basis for Dmitry Medvedev’s speech at Davos, where he called for liberalizing copyright globally. Direct democracy and electronic democracy were hardly discussed in Russia before us.

R.R.:The law on the register of banned websites is to come into effect on Nov. 1, which causes a lot of concern among Internet users. Will this be a black day for the Internet?

S.S.: I don’t believe so. There are lists of this sort in many countries, such as Germany. They mostly block websites with child pornography – not the ones with links to videos, but the ones with the videos themselves. There is a public commission there that sees to it nothing else is banned. But we have no such mechanism, and any websites might get banned. It is quite likely that the law will be used for political censorship.

R.R.: As soon as "Innocence of Muslims" appeared on YouTube, they said that access to the video could be blocked in Russia. Before making any decision, the media and communications watchdog Roskomnadzor “strongly recommended” that providers limit access to the film, and the prosecutor’s office sent out warnings. Can you comment on the actions of Roskomnadzor and providers?

S.S.: I don’t know what to say. This is an attempt by Roskomnadzor to show initiative that is not regulated by any laws. The fact that some providers complied is quite strange – they just wanted to please the authorities.

R.R.:Is there any chance that YouTube will be inaccessible in Russia once they adopt the regulations on the register of banned websites?

S.S.: I don’t think that YouTube or VKontakte will be banned as soon as the law comes into effect. Everyone can draw comparisons with Iran, Afghanistan or North Korea. But YouTube features lots of legal material that doesn’t violate any laws. If access to those materials is limited, then human rights and freedom of access to and exchange of information will be harmed. We have become used to the relatively free exchange of information in the last 20 years, and restricting it would mean encouraging civil unrest. If the law on the register of banned websites comes into effect on Nov. 1, we will launch a website to store the materials that are banned unjustly. Although we won’t be doing this directly, we will provide access to such materials and make them available on the web, even if they are officially blocked.

S.S.: I won’t be making any comments now, in order to avoid encouraging any amendments to the government resolution.

R.R.:The Foundation for the Development of Civil Society headed by Konstantin Kostin – the former head of internal policy for the presidential administration – has recently voiced its concern that the Russian Internet is dominated by foreign services, such as Google, YouTube, Wikipedia, Facebook, Twitter. Should we be concerned, too?

S.S.: Naturally, if some service goes global and has a massive audience, it stores data from millions of people and begins to be exploited by the secret services of the country where the service is located. I am sure that Facebook and other services provide secret services with any information they require. One way or another, Yandex and VKontakte cooperate with the secret service, which simply monitors various social networks.

R.R.:Kostin’s report mentioned foreign services in the context of their serious influence on political life and the elections of 2018.

S.S.: The latest elections have proven that the Internet is influenced by the Kremlin administration: the independent media, Ekho Moskvy, Dozhd were constantly under DDoS attacks. By the same logic, our secret services are capable of influencing elections in the West, because access to social networks is the same for all. If some American bots or people in social networks stir things up, why can’t our secret services do the same in the West?

R.R.:What about the correspondence and user data accessible to the CIA and not the FSB?

S.S.: I doubt that the CIA is interested in the personal correspondence of Alexey Navalny or Duma Deputy Shlegel. But, then again, they must be aware that their messages can be intercepted. From the point of view of public activities, there is no difference which secret services are at work, American or Russian.

R.R.:What role will the Internet play during the 2018 elections?

S.S.: The composition of poll-station commissions appears to be more important than the Internet currently, but, by 2018, the entire active population of Russia will have moved to the Internet. It is the Internet that will become the main battleground for the minds of the people during the next Duma elections.