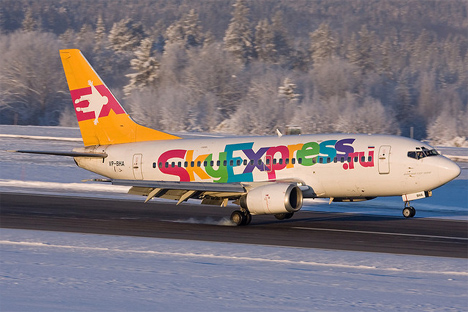 At the time, following the collapse of Sky Express and Avianova, it seemed as though there would be no other discount airlines in Russia any time soon. Now Russia's authorities seek to come up with a model for stimulating competition in the air travel market by creating conditions for developing low-cost travel.

At the time, following the collapse of Sky Express and Avianova, it seemed as though there would be no other discount airlines in Russia any time soon. Moreover, after Yaroslavl’s Lokomotiv hockey team perished in a plane crash, the government labeled all non-major airlines as fly-by-night outfits and vowed to fight them.

Canadian company may be first to produce Western aircraft in Russia

However, in mid-October, First Deputy Prime Minister Igor Shuvalov’s government commission on competition and small-to-medium enterprise development suddenly instructed the Ministry of Transport, the Ministry of Economic Development, the Federal Anti-Monopoly Service and the Federal Tariffs Service to propose a model for stimulating competition in the air travel market by creating conditions for developing low-cost travel.

A week later, the semi-low-cost British outfit EasyJet announced that it would launch two daily flights from London to Moscow in the spring of 2013. The minimum fare would be 6,500 rubles ($205), including duties and taxes. By comparison, Aeroflot, British Airways and other carriers are offering tickets in that same period for more than 11,000 rubles ($350). Even Air Baltic and Lufthansa, which offer connection flights, charge more – around 9,000 rubles ($285). EasyJet is also planning domestic Russian flights, though “not in the immediate future.

Immediately following EasyJet’s announcement, Europe’s largest discount airline, Ryanair, applied for permission to operate flights to Russia from Ireland. Dublin to Moscow is certainly an exotic route – but is it just a test? For example, why would Ryanair not launch inexpensive flights from Moscow or St. Petersburg to Riga or Turku, where the same airline can take travelers almost anywhere – to London, for example – for 3,000 rubles ($95)?

Analysts had barely listed the reasons why foreign companies offering cheap, decent goods and services tend to fail in Russia, when Aeroflot suddenly announced plans to set up its own subsidiary discount airline within a year or so – as soon as Russian legislation was amended accordingly. A dedicated airport would even be built to accommodate the low-cost carrier. Aeroflot CEO Vitaly Savelyev also promised Vladimir Putin that his company would “start with itself” in air travel de-monopolization by waiving its monopoly on 34 international flights. The Ministry of Transport was quick to express its hope that the bill on non-refundable air tickets – a cornerstone of the low-cost airline business – would be brought before the State Duma before the end of the year.

Aeroflot and other “big birds” were never directly accused of helping strike down Russia’s pioneer discount airlines, but Konstantin Teterin, who participated in launching all of Russia’s low-cost projects, still complained of “an economic environment where any large airline has leverage.” Whether this is the case or not, Aeroflot is unlikely to interfere with its own takeoff.

Vnesheconombank Deputy Chairman Sergei Vasilyev recently told Kommersant that Russia needs “more connectedness.” He recalled that, “in the Soviet times, the country’s unity was ensured by low airfares,” adding that “no Western investment is going to come to any provincial towns if it’s impossible to get there by plane".