Pavel Bure gets spot on NHL Hall of Fame 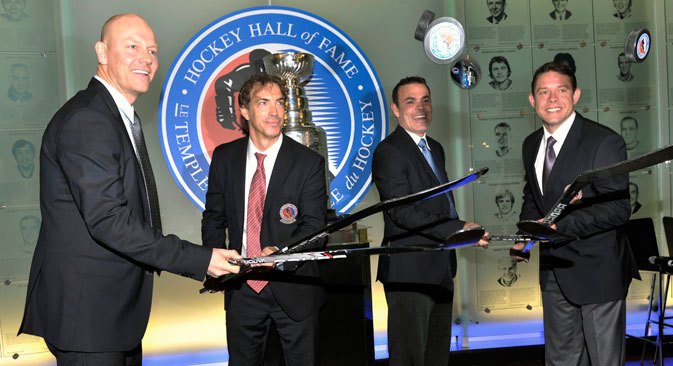 The legendary Russian ice hockey player Pavel Bure has officially become a member of the National Hockey League (NHL) Hockey Hall of Fame, along with Sweden’s Mats Sundin and the Canadians Joes Sakic and Adam Oates.

The induction events took place over several days, culminating in an official ceremony held Nov. 12 in Toronto. That morning, Bure, Sundin, Sakic and Oates received the signet rings signifying their membership in the Hall of Fame in the Players category.

“It’s not for me to say whether I deserve this or not: I’ve always said hockey is a team game, and I’m part of a team. It’s great to be here, a great honor,” said Bure, according to the NHL website.

Fans in Russia just can't get enough from NHL

Bure added that he owed a lot to his first manager and coach in the NHL, Pat Quinn.

“I wouldn’t be here if it hadn’t been for Pat Quinn – he was my first coach, my first general manager and president. He was like a father to me,” Bure said.

Quinn, a legendary defenseman, who is also one of the co-chairmen of the Hall of Fame selection committee, said he was “especially proud of this day.” Quinn coached Bure in Vancouver, Sundin in Toronto, and Sakic in the Canadian national team at the Salt Lake City Olympics.

“It really is simply incredible,” said Quinn. “To work with Pavel (Bure) and Mats (Sundin) in clubs and then with Joe (Sakic) in the Canadian national team was a huge privilege for me, both as a coach and as a person. I watched them play at the highest level and I saw Bure grow up from the age of 20. At that time he achieved one of the most outstanding starts by any young player in the NHL.”

Bure spent 12 seasons in the NHL, playing for the Vancouver Canucks (with whom he reached the final of the Stanley Cup in 1994), the Florida Panthers and the New York Rangers. During this time, the Russian played in 702 games and scored 779 (437+362) points. In 2000, the forward was declared the best player in the All-Star game, and he twice won the Maurice Richard Trophy, which goes to the top goal scorer in the regular league. He captured this award in back-to-back seasons in 2000 and 2001. In his first season in the NHL, Bure was declared the best new player in the league. In May 2012, Bure was also inducted into the International Ice Hockey Federation Hall of Fame.

Mats Sundin was drafted by Quebec as the first overall pick in the 1989 entry draft and spent 18 seasons in the NHL, playing for the Toronto Maple Leafs and the Vancouver Canucks. He appeared in the All-Star game nine times. The Swede scored 1,349 (564+785) points in 1,346 games, the third-highest total for a European player after the Czech Jaromir Jagr and the Finn Jari Kurri. As part of the Swedish national team, Sundin was an Olympic champion in 2006 and a three-time world champion, in 1991, 1992, 1998.