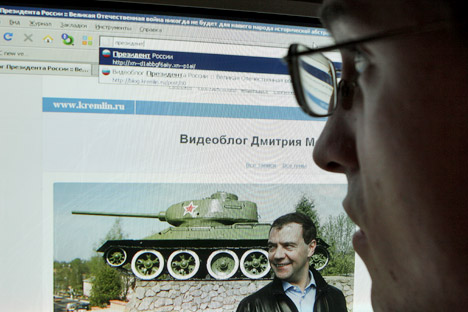 Russia may not be the world champion in terms of computer use or Internet access, but when it comes to non-Latin domains, .рф is the name to beat.

The Cyrillic domain .рф has the most registered users and is the most successful instance of an internationalized domain to date, according to the 2012 World Report on Internationalized Domain Names Deployment, which the .eu registry EURid and UNESCO released in November 2012.

An internationalized domain name is one that contains at least one label displayed in a non-Latin script or in Latin alphabet with diacritics.

"It is easy to use, especially in advertising," said director of the Coordination Center for RU/РФ Top-Level Domains, Andrei Kolesnikov, explaining the popularity of the Cyrillic domain. "It is easier to recall a domain written in a native language, while the probability of a typo when entering this domain in the browser is much lower than for those written in the Latin script."

Registration for .рф opened in November 2010. As of mid-November 2012, there were more than 845,000 addresses registered, which makes it the largest internationalized domain name in the world, according to the Coordination Center.

The domain's growth rates are also impressive. Monthly growth rates have been comparable to those of Russia's Latin-script top-level domain .ru, EURid reports.

The .рф domain grew 54 percent between December 2010 and December 2011, and it has collected 5,973 new registrants since the beginning of November 2012 alone.

The .ru domain, with over 4 million registered users, still has more addresses than its Cyrillic alternative, though it only comes in seventh in the global ranking. Domain names from Spain, Germany and the New Zealand territory of Tokelau took the top three spots globally.

While the .ru domain may not enjoy any global accolades, it does beat out its Cyrillic alternative in terms of actual website use. According to the Coordination Center, 72 percent of .рф domains are in use, compared with 91 percent of the .ru domains.

Giovanni Seppia, one of the authors of the EURid report, added that, despite the good growth rates, the Cyrillic domain had more than 200,000 deletions at the deadline for first-year renewal.

These statistics for .рф are expected to improve as the domain gains user traction.

The Cyrillic domain promises to become more popular after non-Latin e-mail addresses become supported there, Kolesnikov said. Specialists from the Internet Engineering Task Force have already drafted the professional standards for supporting such e-mail addresses, and any glitches are expected to be resolved in two to three years.

Russia was the first among former Soviet republics to launch a non-Latin domain name, followed two years later by Kazakhstan. In addition, the Belarussian Telegraph Agency has announced in October that the domain name .бел may appear in 2013.