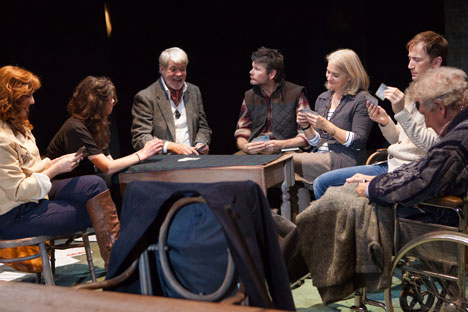 Chekhov’s timeless exploration of youth, ageing and the desire for fame sprouts fresh wings in an intense new production in London.

A twenty-year-old London playwright has rewritten Anton Chekhov’s classic drama of dysfunction, The Seagull, for a 21st-century audience. In 2010, Anya Reiss became the youngest playwright to have had work professionally staged in London, when her prize-winning Spur of the Moment, which she wrote when she was just 17, appeared at the Royal Court Theatre. Actor Benedict Cumberbatch, when presenting her with an Evening Standard award said she showed “obscenely early promise.”

Reiss told the Evening Standard she felt Chekhov’s first major play had a lot of relevance today: “There are things about human nature that are timeless, so putting it in a modern context was surprisingly easy to do … Much of it is about the obsession with fame and love.” Her streamlined version stays close to the spirit of the original play and enhances the powerful effect of a strong cast in an intimate space.

A famous actress, Irina Arkadina, visits her brother’s remote country house, accompanied by her latest lover, an equally successful author. Their arrival inspires Irina’s son, who is obsessed with originality, to try experimental writing and Nina, the girl he loves, to leave the countryside and become an actress. The set is minimal with seats on three sides and, since Southwark Playhouse is in the vaults under London Bridge Station, the actors work hard to create rural peace while trains thunder overhead.

Lily James, who plays the innocent and passionate Nina, is a rising star of British stage and screen. She recently appeared in the hugely popular British TV serial, Downton Abbey, and also (as a very different character) in a pre-Olympics film about female sprinters called Fast Girls. In the play, she perfectly conveys her bafflement and disgust when Konstantin presents her with a dead seagull saying: “what’s wrong with you?” and her repetitions in her last scene of the famous line “I am the seagull” are touchingly distracted without hysteria. Her insistence that in return for fame she would “live off cat food” (rather than Chekhov’s “black bread”) is appropriately reminiscent of the TV show I’m a Celebrity.

The distinctively modern moments fit the emotional structure. Flamboyantly depressive Masha, in laddered tights and gothic mascara, lights a joint and collapses on stage with her i-pod while the besotted, geeky Medvedenko, played with inspired nerdiness by comedian Ben Moor, complains about his taxes. Glamorous Arkadina glides in on designer heels with a glass of chilled rosé while her neurotic son glowers from behind his laptop.

Individual personalities are sharply defined. Characters like Polina, the estate manager’s wife, are usually less visible, whereas Julia St. John brings life and subtlety to her unhappy marriage and her surrogate maternal pride in Konstantin, watching over his shoulder as he types. The young people are brilliantly fragile and the old are convincingly exhausted. The stifled energy of Anthony Howell’s self-deprecating Trigorin is mesmerizing.

Replacing snuff with cannabis or Doctor Dorn’s universal prescription “some drops” with “a paracetamol” preserves the contemporary feel Chekhov was aiming for, throwing the focus onto the psychological observations rather than period details. The awkward undercurrents in a family card game are as true as ever.

Chekhov’s lifelong day-job was working as a physician and his plays often include a doctor as one of the characters. Matthew Kelly brings his TV presenter’s charm to an avuncular and sympathetic portrayal of Dorn. As a typical symbol of disconnectedness, he is given to absent-minded snatches of song when he stops listening, just like Dr Chebutykin in Three Sisters who sings “Ta-ra-ra boom-de-ray”. Reiss replaces a tormented Aria from Faust with J.J. Cale’s Cherry, a poignant, but less bombastic, lament, echoing the play’s eternal question: “Will you need me too?”

Communication, or the lack of it, is a central theme in The Seagull and technology accentuates it. Arkadina’s frustration with being cut off from the oxygen of publicity is clear in her complaints about the lack of mobile reception and her rage at being “trapped” without the Land Rover. Without an audience, she is nothing. “Have you ever seen me … without my make-up?” she asks, “No. No one has”. Sasha Waddell’s portrayal of the superficial and beautiful actress, hanging on to youth and glory at all costs contrasts brilliantly with her son’s brooding intensity. Konstantin, before his fateful, final exit, symbolically drops his phone in a glass of water and upends a jug on the keyboard of his computer.

The fluency of Chekhov’s original play is deliberately broken down so that language itself comes to seem less and less adequate. Characters interrupt and self-correct; the dialogues are fragmented. Ironically, Trigorin, the celebrated novelist (“translated into 34 languages”), is particularly tongue-tied, until he confides in Nina: “You see you’ve um, you’ve hit the … the … the…” At the end, Nina, now an actress, struggles to remember a quotation or its author. References to suicide, or attempted suicide, become nods, mimed gestures, stammered beginnings and hesitations, followed by silence.

Unlike TheSeagull’s many doomed relationships, the pairing of Chekhov with Reiss is unexpectedly apt: the observant 19th century Russian, just embarking on the series of plays that would bring him international fame and a young woman from London with a gifted ear for natural dialogue. Together with excellent acting and direction, they have created a gripping psychological drama beneath the railway tracks.

The Seagull will run in Southwark till Dec.1. To find more information click here.