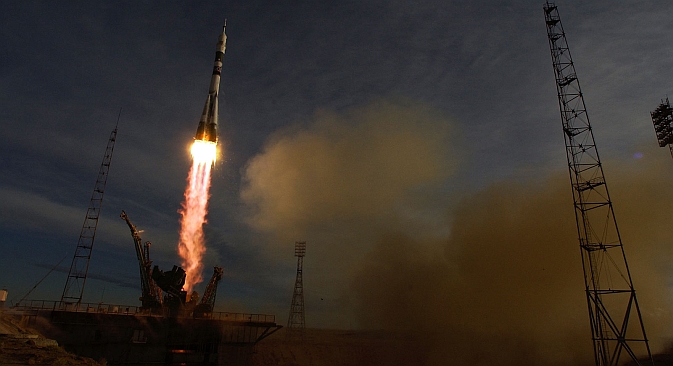 Many Russian and foreign experts have their doubts that the private space business is relevant for Russia. Source: NASA / Press photo

There is no doubt that the global business community is once again getting ready to explore new waters. This time, “new waters” means space.

In late autumn, the first privately designed and built automatic cargo spacecraft (Dragon) was developed by the U.S. company SpaceX and made a successful return flight to the International Space Station (ISS), thus christening the endeavor for private space flights. However, many experts, including those in Russia, have their doubts that the private space business is relevant for Russia.

Americans, who started this trend, have been working on private carrier rockets for years and eventually came up with two programs. The first one is SpaceX’s Dragon; the second is SpaceShip from Virgin Galactic.

The former project envisions the use of privately owned spacecraft in delivering cargo to the ISS and other low-orbit space vehicles; but Dragon carried a limited load for its first flight, so it is still a bit early to speak of commercial benefits.

Dragon will prove much more efficient as a manned spacecraft, however. According to the Skolkovo Foundation’s Space Technologies and Telecommunications Cluster head, Dmitry Paison, NASA spends an estimated $60 million to deliver one astronaut to the ISS in a Soyuz transport vehicle, whereas SpaceX promises to reduce the cost to $20 million and still make profits.

The spacecraft designed as part of the Virgin Galactic project have a very different objective indeed. The reusable SpaceShipOne shuttle was taken to a 9-mile altitude by its mother ship, WhiteKnightOne, before accelerating with its own rocket engine and reaching a 62-mile altitude; this altitude can be considered the lower space boundary. The shuttle continued in zero-gravity conditions for a few minutes and then landed like an ordinary plane, ready for its next flight.

Thrill-seekers will be able to take this kind of suborbital flight for $200,000, which is more than 100 times cheaper than a week’s stay at the ISS with delivery via a Russian Soyuz spacecraft.

In this context, it would be more appropriate to consider private initiatives for the utilization of space exploration results. “A characteristic coincidence,” Paison said, is that, “in 2011, NASA said it would enable private business to service low Earth orbit flights (including the American ISS segment), whereas Roscosmos said in 2012 that it had plans to allow private business to engage in the practical application of the results of space activities.”

Paison mentioned projects pursued together with Russian companies. “Some of the Skolkovo companies are advertising space products and services. We should wait a couple of years to see the first projects of this kind, such as the micro-satellite Sputniks program and the Dauria small-satellite service, as well as the Atmosfera parachute salvage system for rocket stages.”

When it comes to switching to private spacecraft, Roscosmos spokesperson Aleksei Kuznetsov believes that it is too early to draw conclusions from the first American flight.

“SpaceX is the first experience of private business in the space sector,” Kuznetsov told the Russian magazine Expert.

“We need time to understand where exactly this project will stand in space activities, and then we will decide whether it will be applicable in Russian space exploration, given our peculiarities and the preparedness of our business for projects of Dragon’s scale," he said. "There are businessmen in America who are ready to take risks. As far as I know, Elon Musk, the owner of SpaceX, incurred serious costs and even had to borrow. I guess he considered this project to be a long-term investment.”

Furthermore, it is hard to disagree with Pavel Bykov, deputy editor-in-chief of Expert, who said: “The crisis of global space programs is perceptible also in Russia, but we have a well-developed system based largely on the outdated Soyuz technology; however, it is constantly being updated and modernized. It might not be perfect from the point of view of astronauts and cargo delivery, but is a cheap and reliable system that can work virtually for an unlimited period and remain profitable.”

Indeed, from the point of view of one astronaut, the initiative to send private passengers into space is imperfect for more than just technical reasons.

“Space tourism is, unfortunately, a major problem for professionals like us,” said cosmonaut and deputy head at Energia Flight Space Center, Pavel Vinogradov. “Tourism undermines the very foundation of manned space flights, because we have to replace young cosmonauts with tourists.”

Still, according to the Roscosmos spokesperson, astronauts in Russia may not have to worry about being replaced by tourists anytime soon.

“It’s not clear whether our business is ready to take such risks or whether it has enough money. Another challenge for Russian private business is the availability of research and industrial potential to carry out projects of this scale,” said Kuznetsov.