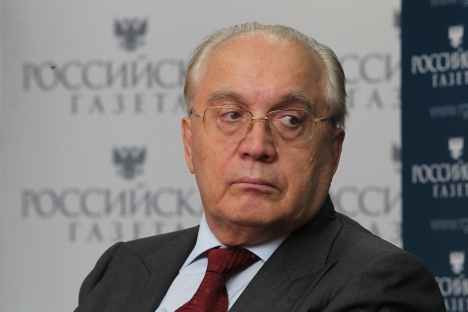 MGU Rector Viktor Sadovnichiy: If we want to improve our education system, we need to think about improving the quality of education in private universities as well, especially in their regional branches. Source: Rossiyaskaya Gazeta / Sergei Mikheev

In any interview with Rossiyskaya Gazeta, Moscow State University Rector Viktor Sadovnichy shared his view that only a small number of universities deemed ineffective will be shut down. Most of them, he believes, will be restructured.

Rossiyskaya Gazeta:Some rectors claim that they had no idea that their universities were being assessed, and that they were unaware some important decisions could be made based on its findings. Yet, the minister insists that the campaign was agreed upon with the Russian Rectors’ Union and the Association of Leading Russian Universities. Where is the truth?

Viktor Sadovnichy: First of all, we need to keep in mind that the evaluation of universities is based entirely on the logic of the evolution of the quality of higher education and its fundamental nature, which has always been characteristic of our education system. We are assessed and evaluated throughout our lives, and university ratings are another part of this process that has gained popularity in recent years.

Some of their criteria are being challenged, but they are recognized globally. Leading universities have to take this into account and continually strive to improve. Our country has also been paying more attention to university ratings, even at the very highest levels. So there is no need to be afraid of these university inspections.

As for its criteria, the Ministry of Education insisted that, at the initial phase, only five criteria out of 50 were to be used to assess a university’s performance. This matter was discussed at an extended meeting of the presidium of the Rectors’ Council, which was attended by the minister of education. The five accepted criteria are by no means perfect, and members of the presidium brought this up.

We have decided to establish a joint working group of the Rectors’ Union and the Ministry of Education to improve the organization and methods of inspection next year.

The presidium focused on the multi-faceted character of university inspections, which assess the quality of education of a given university, its connections with employers, the fundamental nature of its education and its research foundation. Expert evaluation should be included here to ensure that all factors have been taken into consideration, such as what kind of educational institution it is (a teaching university or an arts college, for example), and where it is located (if it is the only university in the region, etc.).

RG:But there was no expert evaluation in the inspection reports… If we shut down all the bad universities, the country will be left without teachers, architects, veterinarians and agriculturists.

The Ministry of Education and Science sent letters to councils of rectors in the regions and governors with a request to analyze the development of their universities and make proposals about their future development. The list was posted on the ministry’s website before everyone had a chance to reply, which drew public criticism. The workgroups became operational later. They will soon complete their activities.

RG: There have been reports that some “underperforming” universities have had their status revised. Will there be any universities left in this “inefficient” list?

V.S.: The thing is that, if the administration of the region or the local education office challenges the inclusion of the university in the “high-risk group” at a meeting of the working group, their opinion will be taken into account. The working groups included representatives of all of the regional rectors’ councils, who insisted that all factors should be taken into account - including regional interests. I don’t think we will see too many universities making changes any time soon.

RG:What should they do with their regional branches?

V.S.: That’s a different story. The reorganization of university branches is the right thing to do. Most of them are located in Southern Federal District, in Cossack villages, and are affiliated with technical schools and training colleges. The level of education they provide is often substandard.

There is one regional branch of a university that has 2000 distance-learning students. None of them have scholarships, but they will all receive state university degrees - the same as if they had attended a full-fledged state university full time!

Some universities have 60–70 branches or so. Naturally, they need to be reorganized; and the students should be transferred to the parent university, while keeping their extramural status. This is for the good of their education. They might need to be attached to the federal universities, but this shouldn’t be done automatically.

V.S.: So far, we have only been inspecting state universities; but I believe that if we want to improve our education system as a whole, we need to think about improving the quality of education in private universities as well, especially in their regional branches.

The first question I was asked during a recent trip to Japan, where I was meeting with the country’s administration, was: “What about the quality of your education?” I said: “Unfortunately, the number of universities and their branches in Russia rose to 3,500 in the 1990s.” They were shocked. There are a slightly more than 700 universities in Japan, including 100 state-run universities.

RG:The campaign of inspections has caused quite a stir; why not assess universities as part of state accreditation or when licensing them?

V.S.: I have no idea. I have always been against massive numbers of branches and unwarranted increases in the number of universities. But they were telling me that it conformed to laws, and there was nothing that could be done. The best decision would have been to alter accreditation and licensing rules, but the move would have called for legislative changes. I don’t think it is easy to shut down a university, both on paper and in practice.

Inspections naturally stir up public interest. Historically, education has remained the pillar of Russian statehood. The most significant achievements of the country, its scientific breakthroughs and social progress should be attributed to the high level of its education and science.