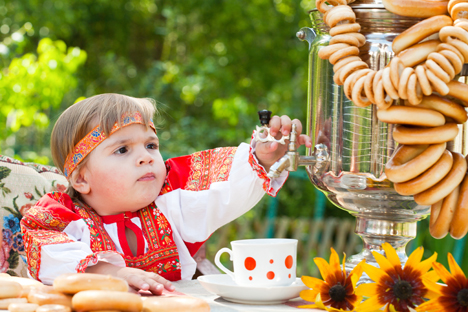 The most notable aspect of Russian tea drinking is the absence of any firm rituals. Usually Russians meet “for a cup of tea” in the friendly company of several relatives, friends or acquaintances to relax and discuss their lives.

When Russians have guests over for tea, they will often say, “Make yourselves at home – no ceremony!”

Tea came to Russia from Asia, and while Chinese tea was shipped to Europe by sea, it was brought to Moscow by trade caravans via the Mongolian town of Kyakhta and onward through Siberia. Russia’s capital was, and still remains, the center of Russia’s special tea traditions.

We know that Russians were first introduced to tea in China in the early 17th century, when Russian Czar Mikhail Romanov was presented with several cases of tea as a gift from Chinese emissaries. The tea grew on the borders of the regions that are now known as Hubei and Hunan.

While citizens of the Russian Imperial capital of St. Petersburg sipped on their coffee, tea became one of the main traditions of Muscovite hospitality.

It was impossible to make tea without a “samovar,” of course. A samovar, which roughly translates as “boils itself,” is a vessel for boiling water. They have similar water boilers in China called “huo guo” (hot pot); but the hot pot’s design is different from the Russian samovar, and it is used somewhat differently.

It is generally believed that Czar Peter I first brought samovars to Russia from Europe. Others claim that the samovar appeared in Russia some 50 years after Peter’s death in the Urals. Russia’s famous Tula samovars were first made around 1778, in the town of Tula, near Moscow. Tula was the center of the Russian tea trade from the 17th to the 19th centuries. It is located near iron ore deposits, which prompted the development of the samovar business. By the middle of the 19th century, Tula could boast 28 separate samovar factories, which, between themselves, put out 120,000 samovars every year. Tula was so well-known for making samovars that, even today, there is a popular Russian saying: “You don’t go to Tula with your samovar.” By the middle of the 19th century, the town was producing all kinds of samovars, including travel samovars, samovars for taverns and samovars for the home. It was then that the first nickel-plated samovars appeared ‒ a source of especial pride among owners.

The Russian samovar is the center and the spirit of Russian tea drinking. It was invented and perfected with just one purpose in mind – to boil water for making tea. It always stands at the center of the table whenever tea is served. As well as the samovar, there is always a single teapot for brewing the tea. In Russia, the usual way is to make very strong tea in the teapot. Each guest pours a little of this strong tea into their tea cup and then dilutes it to their personal taste with boiling water.

Tea is always served with sugar. These days, people put it in their cups; but originally, tea drinkers would put small lumps of refined sugar directly in their mouths and then drink the tea through the sugar lumps. This was initially a Siberian habit. The Chinese and the British may both be great tea-loving nations, but they do not have anything like this – nor do they understand or appreciate this purely Russian custom.

In addition to drinking sweetened tea, Russians traditionally serve the beverage with thinly sliced lemon, honey or “baranki” (miniature hard-baked bagels) and nuts. These days, people like to offer all kinds of sweets with their tea – chocolates, spiced cakes, fruit jellies and boiled sweets.

Russian tea is always very hot, which is another characteristic of Russian tea drinking. Years ago, it was normal to provide guests with face towels, so that they could dry the sweat from their faces. If the tea was too hot, it could be poured from the cup into the saucer – a small plate with raised edges, onto which glasses or cups were placed. Not many people do this today, but tea cups nevertheless still come with sets of saucers on which to place them.

The most notable aspect of Russian tea drinking, however, is the absence of any firm rituals. It is not linked to any particular time of day, as it is in England, or to any special sequence of preparations, as in China. Russians will often not only meet up “for a cup of tea” with a friend, but also in the friendly company of several relatives, friends or acquaintances. They will relax over a cup of tea ‒ unwind, chat freely and discuss their lives.

In the days of Czarist Russia, merchants would sit for hours over tea from an enormous two-gallon samovar, while discussing their business matters, financial affairs or concluding contracts. In Moscow’s famous Merchant’s Hall – the oldest of Moscow's trading halls, in the center of the city – the samovars were never allowed to go cold.

Tea drinking in Russia normally begins after lunch. In other words, it is a way of rounding off a meal. Tea is often served with dessert, such as sweets or fruit. If guests have been specially invited to tea, then an extensive range of snacks can be expected – open sandwiches topped with cheese, sausage or smoked fish, along with sweet pastries.

If you ever find yourself invited to tea in Russia, then rest assured: a warm welcome awaits you, accompanied by engrossing tales, open-hearted conversation, perhaps even some songs, and happy and delightful memories.